ASSESSING THE STRENGTH OF BRAND AUSTRALIA ITSELF

The BrandAsset Valuator (BAV) is a study of consumer brand perceptions, measuring brands on imagery and equity dimensions in a category agnostic fashion. By understanding and exploring a brand against the broader dynamics of culture, BAV can uniquely provide insight into a brand’s larger role in the evolving cultural marketplace and provide actionable insights that drive both brand growth, and the brand’s impact on culture.

Developed by WPP’s Y&R BAV Group in partnership with U.S. News & World Report and the Wharton School, the annual Best Countries ranking was first launched in 2016 at the World Economic Forum’s meeting in Davos, the world’s largest gathering of global leaders and heads of industry and influence. It is now in its third wave.

BAV has been collecting cultural ranks of brands for 24 years to date, having spoken to over 1.2 million consumers globally. In Australia, BAV has been tracking thousands of brands on the same 75 brand association, including 48 imagery dimensions, since 1993. The evolution of the brandscape in Australia has been meticulously measured and studied by BAV and reflects the culture of the times and consumer attitudes.

BAV’s Best Countries ranking compares perceptions of countries around the world held by a broad spectrum of consumers. There is a close relationship between how people feel about a country, and their attitudes towards the brands they associate with that country. Strong countries fuel strong brands, and vice versa.

Australia has a high-profile presence on the world stage and is widely regarded positively across most categories. Although geographically isolated, it is recognised for its economic stability and quality of life, even with the current crisis impacting its banking industry.

In the 2018 Best Countries Ranking, Australia ranked 7th in the world out of 80 major markets across all measures.  It ranked second as the most desirable place to live, second in family friendliness and modernity, and fifth in quality of life.

Australia is seen as a highly desirable place to live, work, and raise a family.  It is seen as a place of fairness, friendship, adventure, and equality.

How a country is viewed around the world is of huge importance to brands. The words “Made in ...” can instantly lend credibility and trust to a product or brand that a consumer hasn’t previously encountered. That can be enough to convince someone to buy, and beyond that, convince them to pay a premium. Likewise, “Made in ...” can prove an instant turn-off if a consumer associates the country of origin with poor safety standards, or sees it as being behind the times on social issues or workers’ rights.

Opinions on Australia are influenced by the perception of its culture conveying a sense of adventure and humor. This gives Australia an opportunity to leverage its likeability around the world by building on its reputation.

The perceptions and performance of brands abroad feed back into the development of the country itself. Willingness to invest is closely linked to the strength of a country’s brand, and as local brands and businesses succeed, they generate economic growth as well as lend further positive associations to their country’s brand.

Australia is one of the few top-ranking markets to improve its position between 2016 and 2018 swapping up positions with the US, while other powerful nations, such as Germany, slipped.

THE  VIRTUOUS CYCLE FOR WHICH EVERY BRAND HOPES

The relationship between country brands and the products and services those countries produce is complex and changes over time. When a country and its brands represent consistent qualities and values, they lend one another credibility, and there is a multiplier effect for both.

Think of France and Channel; both represent elegance, glamour and prestige. Channel is intrinsically French, and France is synonymous with Channel. The same could be said for Germany and BMW, and perhaps the US and Levi’s, or Japan and Sony. In each case, the brand and the country are part of a virtuous cycle, a symbiotic relationship.

Brands can both shape and be shaped by perceptions of their country of origin. Japan in the 1970s was known as a cheap manufacturing base, but is now respected as a world leader for quality electronics and technology thanks largely to brands like Sony and Toyota. South Korea has taken a similar path, with Samsung and Hyundai demonstrating to the world what modern South Korea can deliver and created a halo effect improving consumer attitudes in international markets to favor other Korean brands.

In a relatively short time, China has shifted perceptions from being seen as the world’s high-volume but dangerous toy factory, to a powerhouse of entrepreneurship and innovation, particularly in digital technology. This is partly because of government strategy and a rebalancing of the Chinese economy, but also due to the ambassadorial role of some of China’s leading export brands, such as Haier, Huawei and Alibaba.

Australia’s quality of life is a big factor that attracts Europeans, Asians and Americans. The fairness and passion for life that Australia exhibits can be seen in its people and its brands. Australia is seen as humorous, adventurous, and fun.

HOW TO MEASURE A COUNTRY

The Best Countries Ranking Incorporates The Views Of More Than 21,000 Individuals Surveyed In 36 Countries In Four Regions: The Americas, Asia, Europe, And The Middle East And Africa

These people include a high proportion of “informed elites” – college-educated people who keep up with current affairs – along with business decision makers and members of the general public.

Respondents are asked about the

80 countries that feature in the 2018 ranking; between them, these countries account for about 95 percent of global Gross Domestic Product and represent more than 80 percent of the world’s population.

People surveyed for Best Countries are asked how closely they associate 65 attributes with a range of countries. These attributes are then grouped into eight categories that are used to calculate the Best Countries ranking: 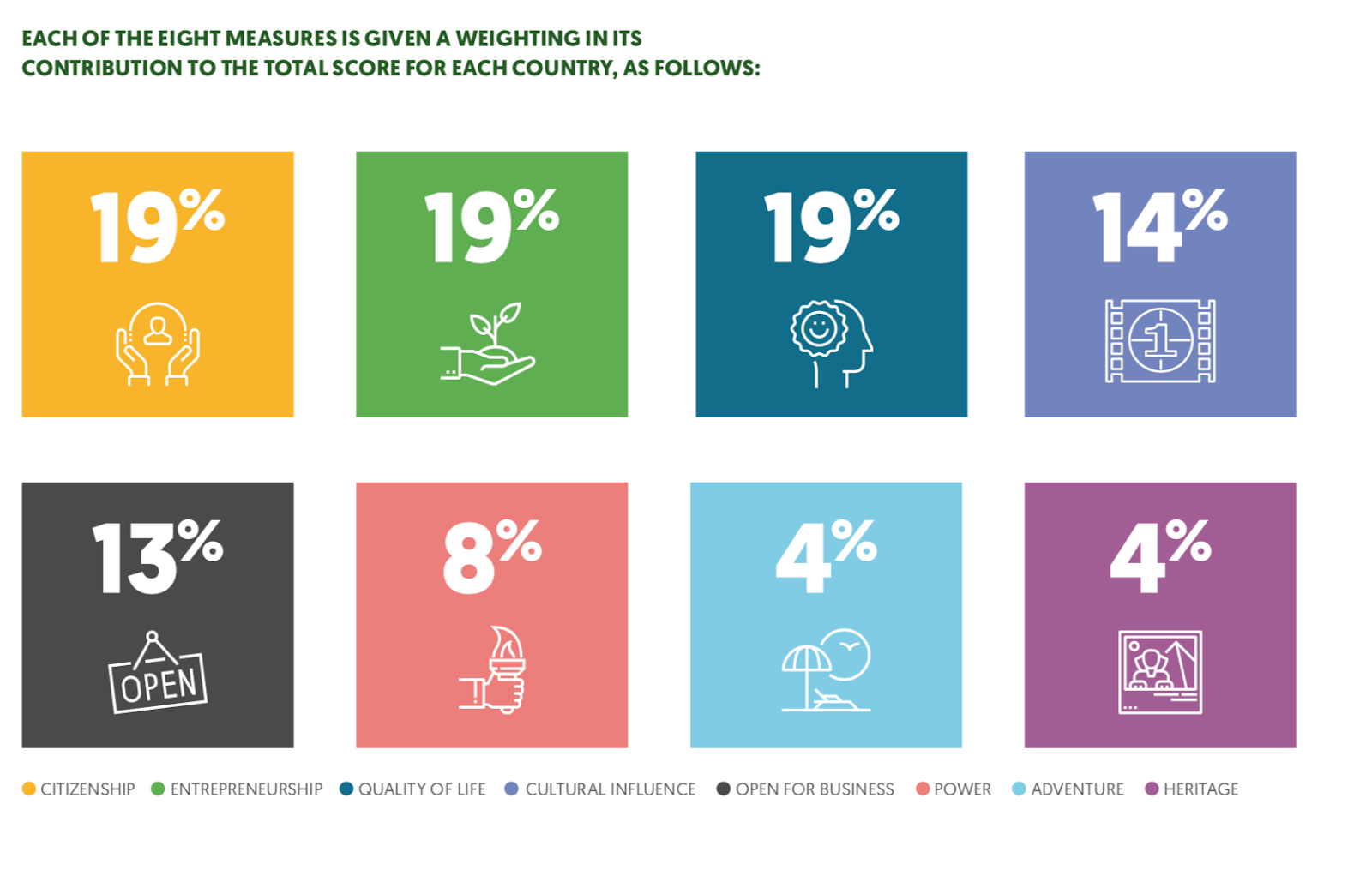 The weight of each category in the final index is determined by the strength of its correlation to per capita GDP (at purchasing power parity). As seen in the nearby chart, a nation focused on providing great quality of life for its people, which cares about rights and equality, and has a focus on entrepreneurship, is seen as having the most powerful nation brand. This reflects how the world has changed; no longer is it just tanks and banks that give a country influence around the world. Hard power is making way for softer power that comes about as a result of entrepreneurship and cultural exports.

The Best of the Best

Australia’s 2018 overall rank rose to 7th from 8th, overtaking the US.  It’s quality of life, citizenship and cultural influences are all key elements in Australia’s placement among the world’s best countries.

A Closer Look At Brand Australia

Notwithstanding the recent news and the Royal Commission into Australia’s banking irregularities, Australia is ranked #1 in the world in being seen as Economically stable and 3rd overall in terms of its job market. Australia’s reputation as a happy, friendly, and modern nation makes it the second best country on Earth in which people wish to reside.  Australia’s strong banking sector, measured in the BAV rankings as “Power”, places it 16th in the world. Australia’s Quality of Life and Citizenship scores (which makes up nearly 35% of the overall rank weighting) is particularly strong. 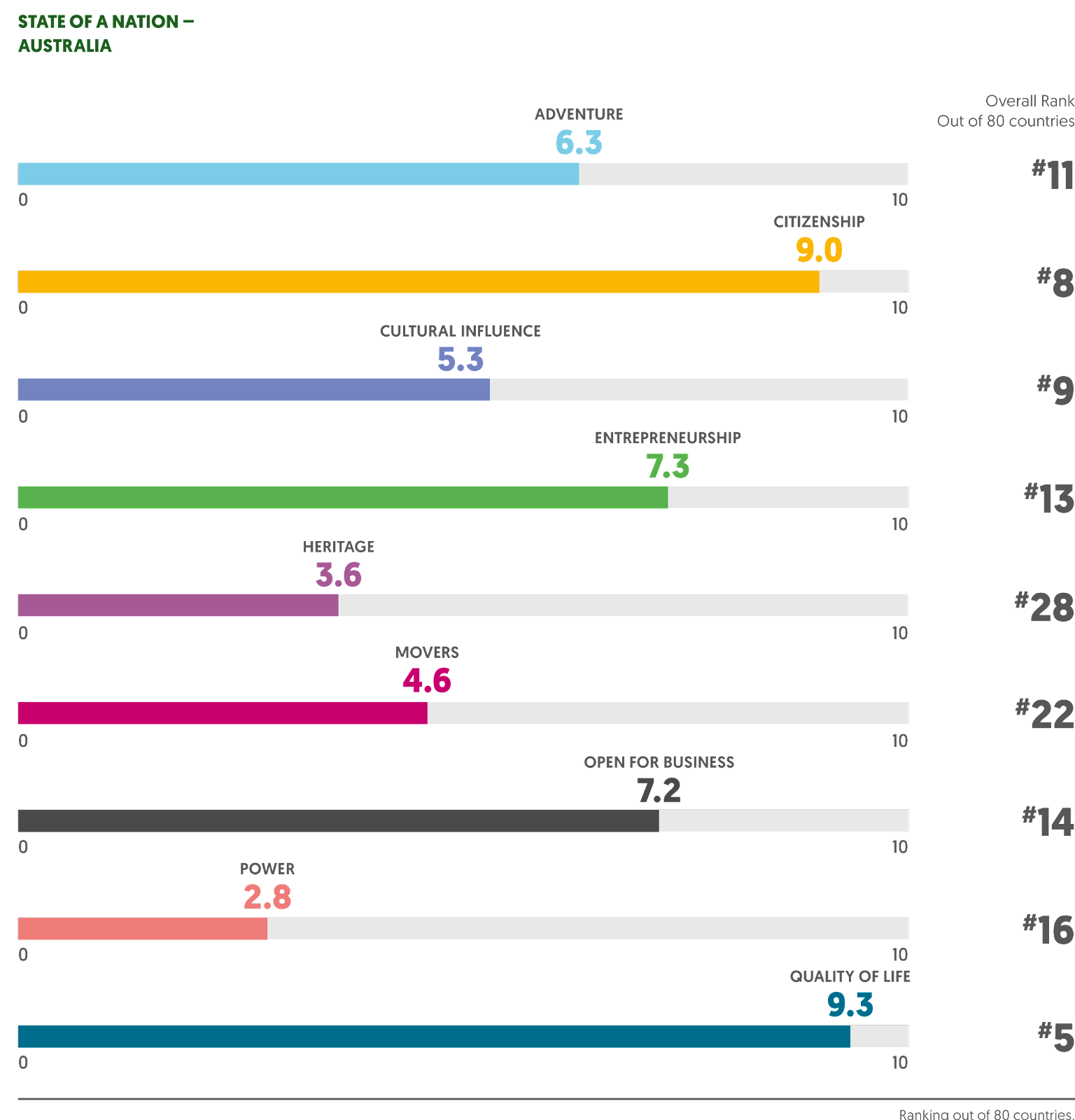 Keeping Up With The Neighbors

Australia’s rank in the Top 10 relies heavily on social factors that affect how we live. Culturally, Australia is seen alike to Canada and Nordic powers such as New Zealand, the Netherlands, Denmark and Sweden, though Australia’s business practices are seen to be somewhat less transparent. 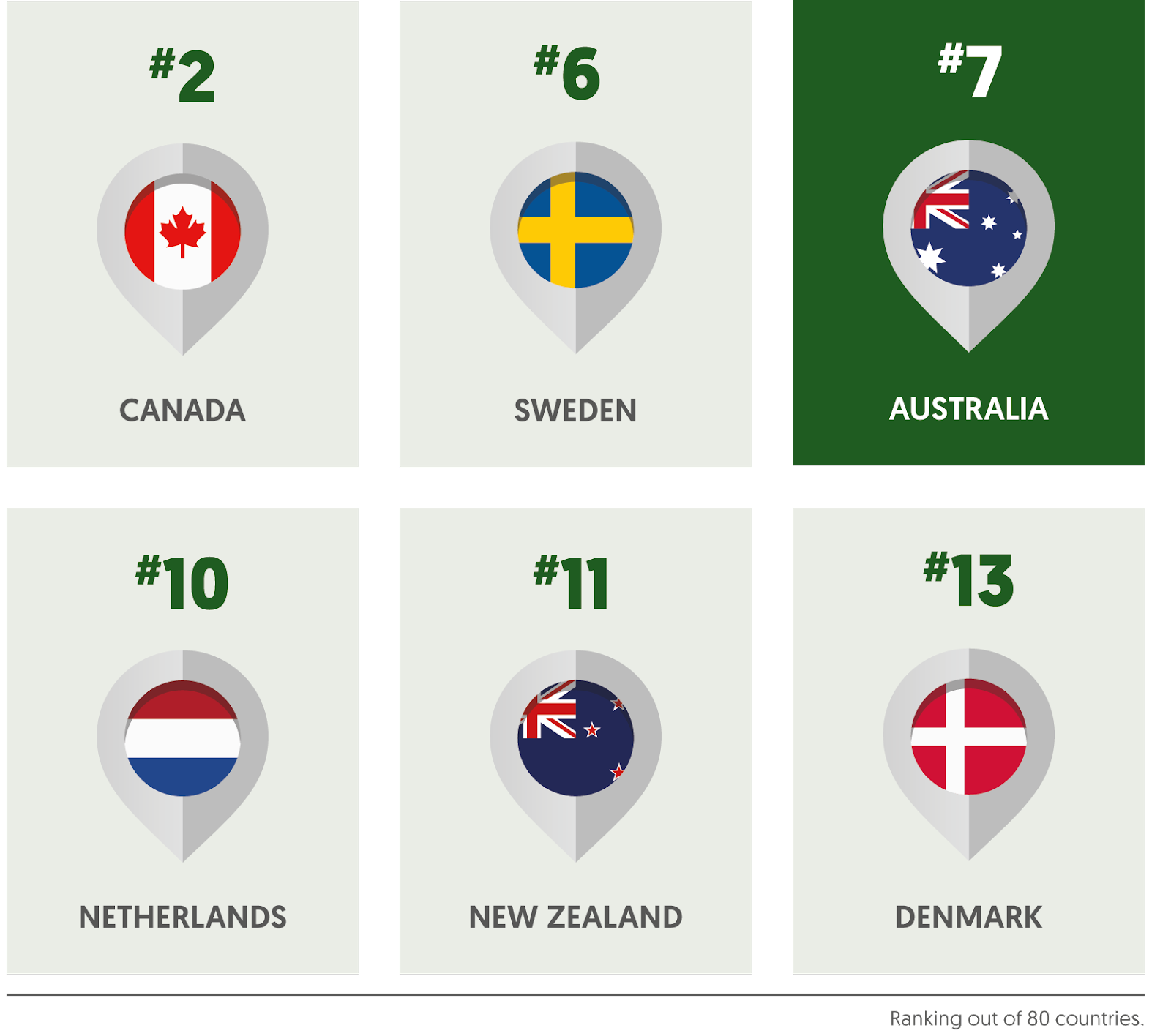 Australia strong Citizenship ranking is driven by its religious freedom, equality, and progressive attitudes on environmental and social issues.   However, there is room to grow on traits associated with business readiness and affordability. Despite Australia ranking 3rd as “A Good Job Market”. It ranked 30th in Favorable Tax Environment, 60th out of 80 countries in affordability, and 77th in Cheap Manufacturing Costs. 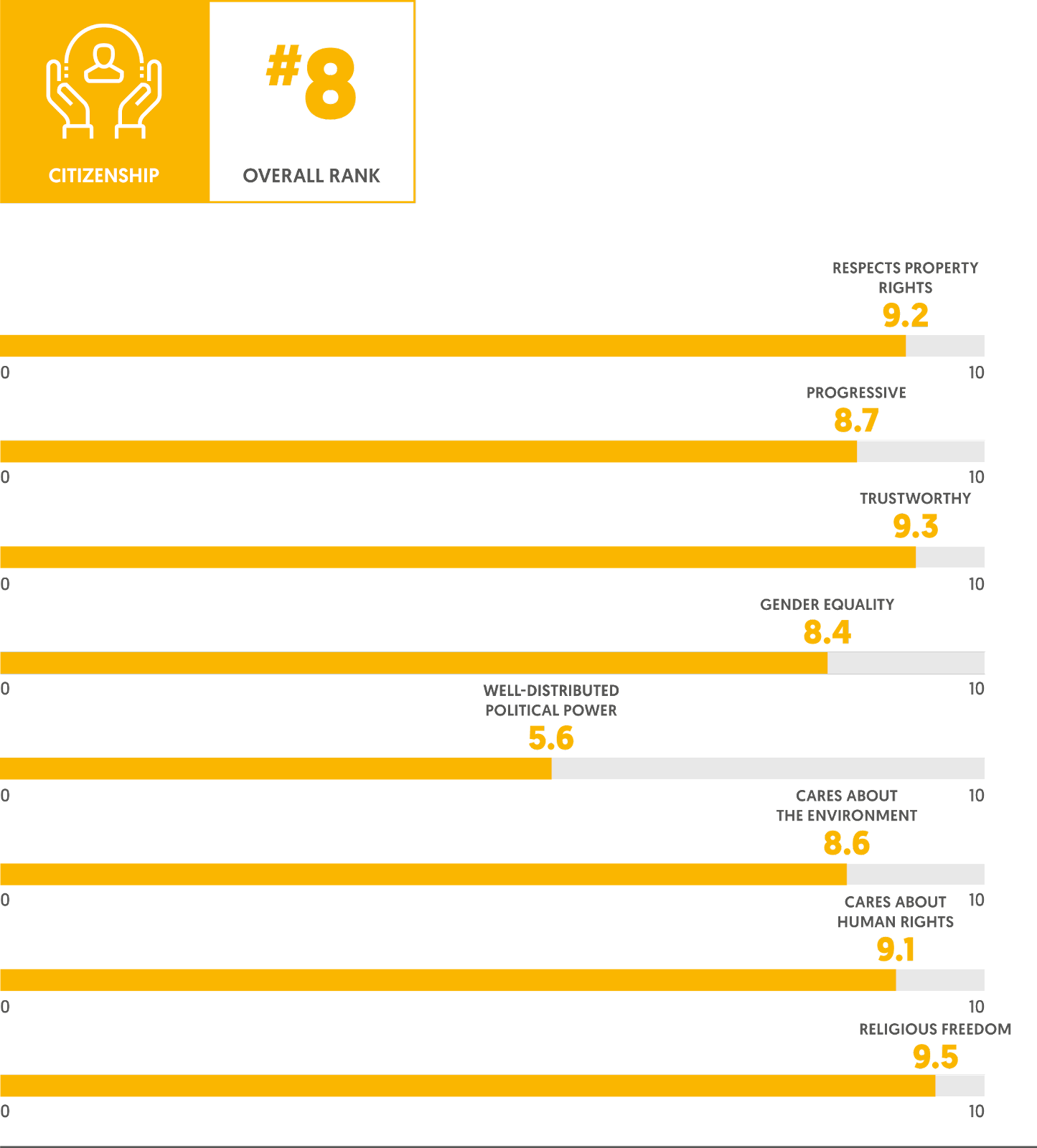 Brands can use their country of origin to greatest effect when they align with values and positive attributes already associated with that country. This often means walking a fine line between using accepted wisdom to benefit a brand, and perpetuating stereotypes.

Striking the right balance is a matter for each brand, and will depend on the brand’s category and the market in which it competes. For some brands, the reputation of their country will help fill gaps in what consumers know about an individual brand.

The following rules of thumb apply to most brands

Australia is best known outside the country for its cultural mix of humor and adventure. Brands that reflect the irreverent humor, instilling a sense of adventure and fun will feel authentic to consumers around the world. Avoid stereotypes and focus on why Australians love their country, the strong sense of mateship and social interconnectedness. 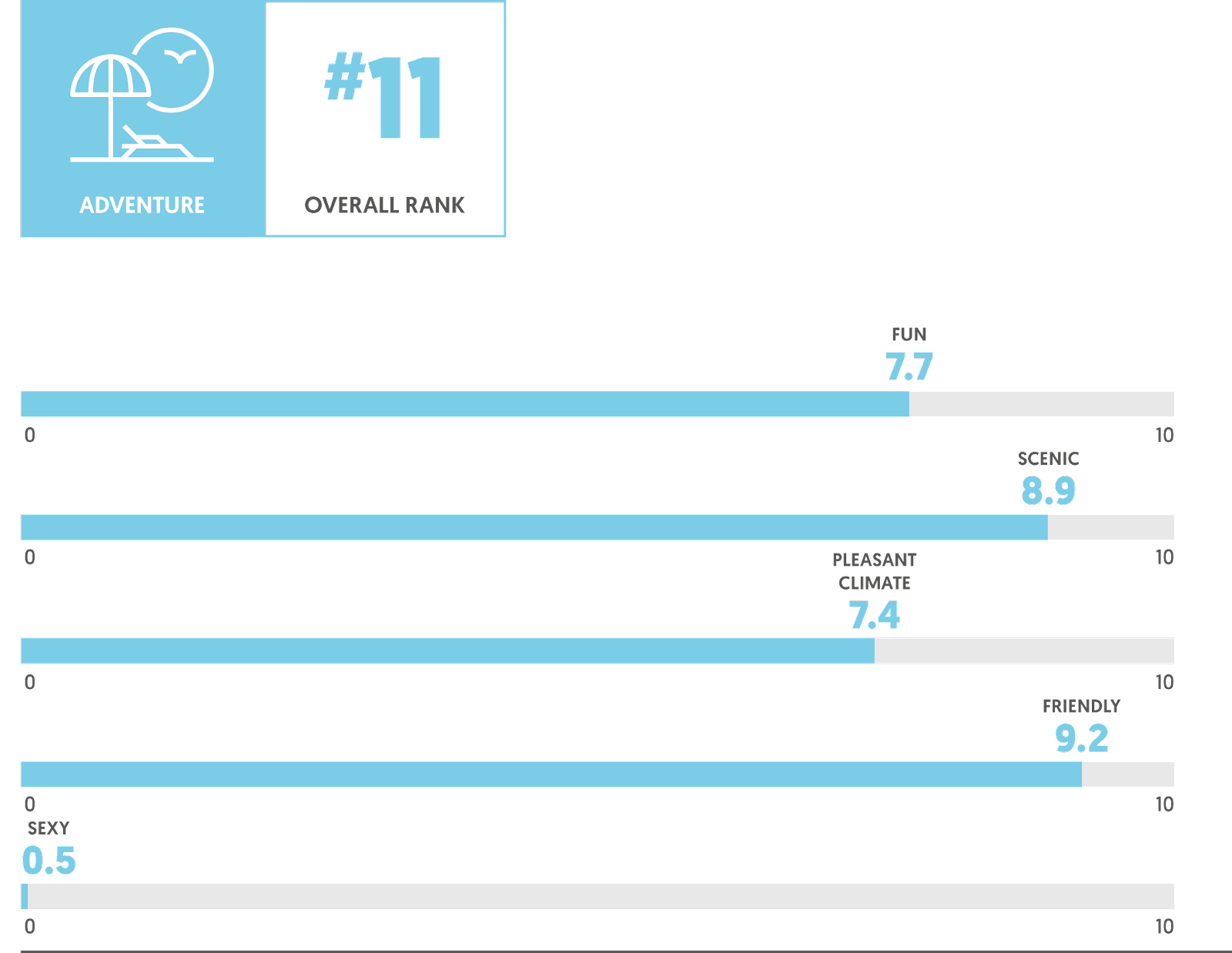 International consumers do not see the Australia as a particularly affordable market, but the country is viewed as both stable and trustworthy.  Despite disadvantages in high cost of living and affordability, Australia is seen as economically stable with an attractive job market. The balance of cost versus quality of life reflects the unique Australian way of balancing finances and fun.

Innovation and technology expertise is not strongly associated with Australia. Throughout the world, desire for the latest gadgets and apps are driving cultural change. Australia has withstood competitive threats in the past, but speed of technological change presents a threat that can only be met through a focus on innovation.

Australia is seen as a progressive leader on social and environmental issues. Leadership in business, political, and social spheres can be further developed to promote Brand Australia along with its constituent brands.

The powerful associations that Australia has with mateship, equality, and trust – can be used to raise consumers’ expectations of inclusion, enjoyment, and loyalty.