Media | Budgets follow eyeballs to screens of all sizes

The intensity with which consumers are using their smartphones is having a dramatic effect on the way brands communicate. And, with almost-universal smartphone penetration in Australia, it is driving a major shift in advertiser budgets away from what might be called traditional media and into digital.

But there’s a simultaneous shift going on, on another screen, that’s complicating the picture for advertisers. The rise of video on demand, both advertiser-supported (known as AVOD) and subscription-funded services known as SVOD, is giving viewers more choice of what to watch than ever before, and new patterns of viewing are quickly gaining traction.

AVOD services, including YouTube but also the catch-up services provided by TV broadcasters, such as Nine Now and 10Play, are proving immensely popular, and in 2019 are forecast to be the fastest-growing area of investment for advertisers, up 17.5 percent this year. That’s on top of growth of around 25 percent in 2018.

TV viewing is also being shaken up by the rise of paid-for services such as Netflix and Stan; Netflix in early 2019 passed the 11 million subscriber mark in Australia – quite a result for a country of 25 million and a service that’s only been available for four years. These services are advertisement-free, which means they’re capturing consumer attention, but not providing opportunities for brands to get in on the action.

With audiences lured away by such a bumper range of content elsewhere, traditional TV audiences are declining.

This is all forcing brands to be more creative in how they reach consumers, both in terms of the media they choose and the messages they develop, so that when they do reach their audience, it’s with a relevant and timely message.

Digital media is the clear beneficiary of this drive for connection and resonance, further boosted by the rise of e-commerce brands, which are heavy online advertisers. GroupM data shows investment in online advertising forecast to rise by almost 55 percent in 2019. The strongest growth in digital is coming from spending on online video; adspend on mobile search and display are expected to double in the next couple of years.

Radio maintains its appeal among advertisers, as does cinema. Outdoor is being boosted by investment in new technology that allows content to be adjusted according to location and time of day, then linked with mobile phone location data for pinpoint targeting.

All this growth comes at the expense of print, which is seeing declining interest from advertisers across most of the world. 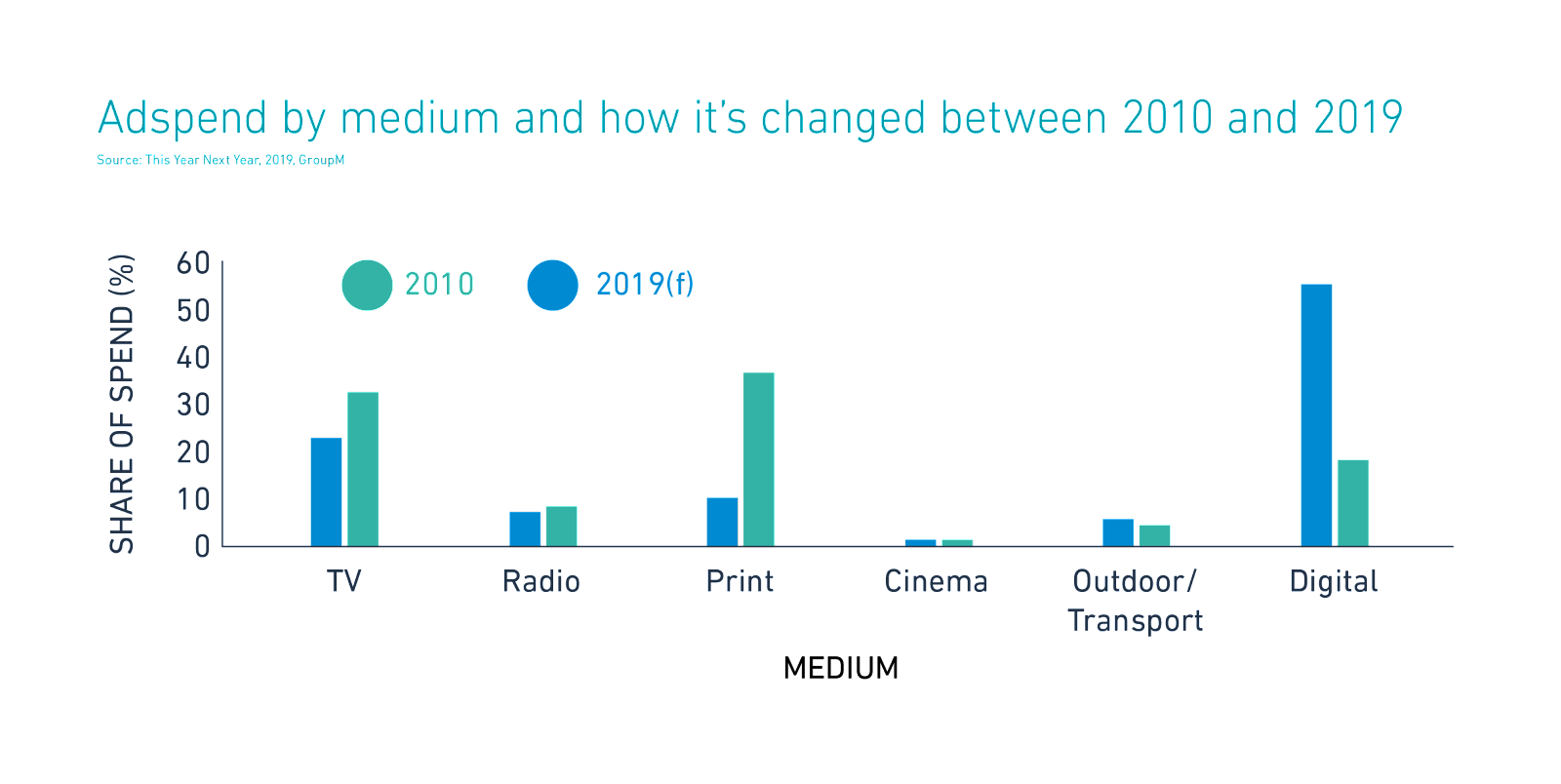 Retailers – primarily supermarkets – are the country’s biggest spenders on advertising, followed by carmakers, government departments, property brands and telecommunications providers. Travel has been one of the fastest-growing sectors in recent years, along with communications and energy, which are both highly competitive categories thanks to industry deregulation.

Never out of fashion: big ideas

Media proliferation has transformed the communications landscape, but there’s nothing so powerful as a great idea, and that’s not changed at all.

·      Emotive storytelling and authenticity combined for a fresh take on breakfast cereal advertising in the “My Perfect Bowl” campaign by Kellogg’s. The documentary-style ads feature 10 groups of real families and friends, from construction workers to a drag queen, in seemingly unscripted conversation about the way they enjoy their favourite cereal. Sinead Roarty, Creative Director, J Walter Thompson, Sydney, told Campaign Brief: “We wanted to show the genuine love Australians have for the brand, yet My Perfect Bowl isn’t just a campaign about cereal. It’s a portrait of contemporary Australia. Our goal was to not only find what unites and connects us, but to also celebrate how different and diverse we are.” Content was used in TV and online video, and adapted for social media and product packaging.

·          Sometimes a big idea goes beyond the bounds of advertising. That was the case for insurer AAMI’s SmartPlates project, which sought to improve young drivers’ safety on the road. Young drivers are 30 times more likely to have an accident than other demographics, so AAMI refreshed the way we teach kids to drive. SmartPlates is a real-time driving tracker and coach that monitors every aspect of a driver’s behaviour on the road, linked with road type, traffic density and even the weather, to give drivers and their parents and instructors a complete picture of their skills – and highlight areas that need improvement. The app has been downloaded more than 25,000 times, and the campaign reached over 16 million Australians.