li:before{content:"o "}ul.lst-kix_list_1-0{list-style-type:none}.lst-kix_list_2- BrandZ is the world's largest brand equity database. Created in 1998 and continually updated. BrandZ is an invaluable resource, containing data on brands gathered from interviews with over 150,000 people every year in up to 400 studies around the world"> brandZ | Report - Spain
We’ve stopped what we are doing and creating your personalized BrandZ™ report, which will appear in your inbox soon.

It seems incredible that just a year ago, we were talking about a stable and steadily growing economy in Spain contributing to rising investment by advertisers. Those days seem like a distant memory right now, and while the advertising sector will invariably bounce back, we will not be seeing growth this year.

Globally, the advertising economy is predicted by GroupM to fall by 11.8 percent, severe indeed. The impact of this will be felt quite differently in markets around the world, and Spain, along with Brazil and India, is expected to be among the unfortunate few that see a drop in advertising investment in excess of 20 percent in 2020.

This compares to a 15 percent drop in France, just under 10 percent in Germany, 12.5 percent in the UK, Canada 5.1 percent and Brazil over 29 percent.

GroupM is, however, predicting a sharp uptick in 2021, a forecast that assumes that all the activities that have been so limited this year – travel, tourism and events involving crowds – will be able to return in some form next year. They also assume that the Olympics go ahead in 2021, and other sporting events return to different degrees in different markets. Overall, the media market is expected to grow by 10 percent; in some countries that will mean pent-up demand will cover most of this year’s losses.

Marketers in Spain have difficult decisions to make in the meantime. It is widely acknowledged that if brands “go quiet” in a crisis, they risk fading from people’s memories. But knowing what to say in order to maximize both impact and ROI is a delicate balancing act.

Globally, there was vastly reduced spending by advertisers in the first part of the year. The World Federation of Advertisers found in April, for instance, that 89 percent of multinational brands had put campaigns on ice, and just over half planned to hold back their ad spending for at least six months.

While around two-thirds were running campaigns that responded to the COVID-19 crisis, the level of spending on this kind of reactive advertising did not make up for the deeper cuts being made to other campaigns.

Consumers were making changes to their media habits on a similar scale. With schools and most workplaces closed for months, demand for information and at-home entertainment shot up. Television attracted record-high audiences once lockdown took effect on March 15. 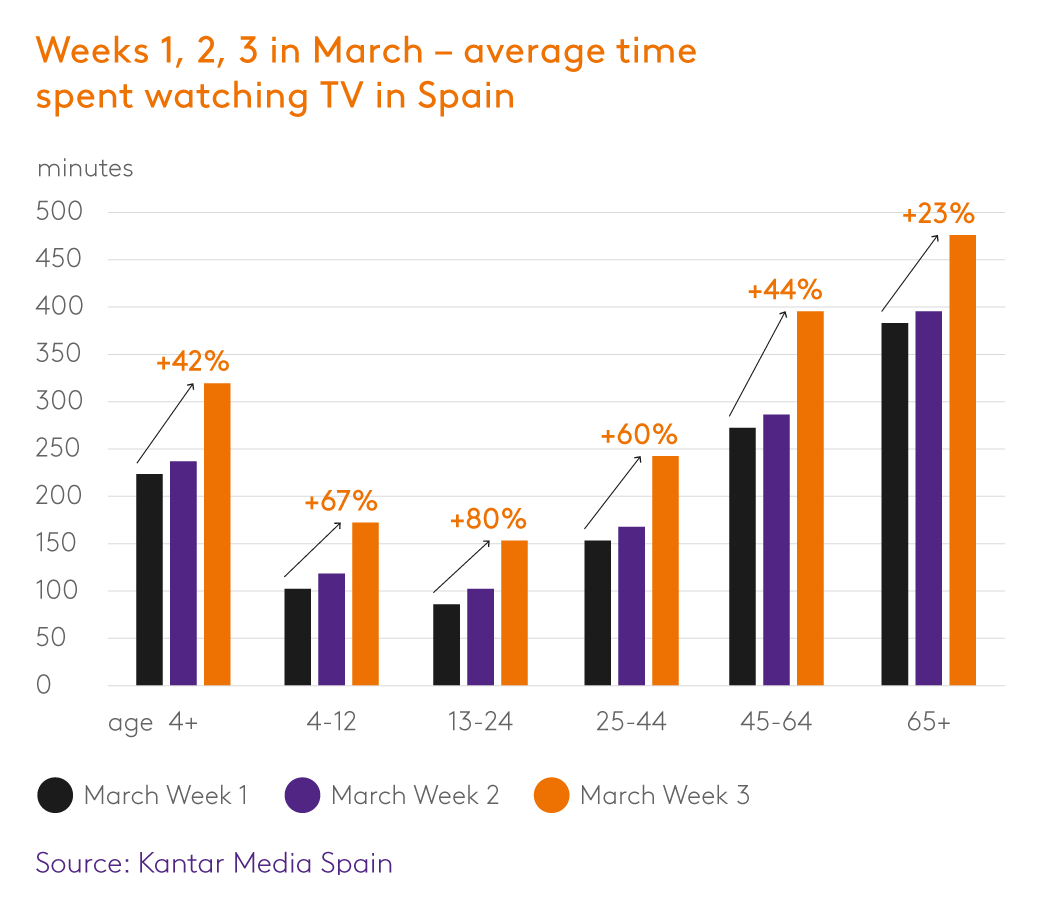 As restrictions are eased and some aspects of life assume a new form of normal, brands need to be attentive to which of the COVID-induced shifts in media consumption will stick. Many people will have formed a lasting affinity with news brands they have come to depend on. Some will have discovered programming they had not seen before and will have found new favorites. And some families will have rediscovered the pleasure of enjoying content together.

Knowing what to say and how to say it

It’s widely understood now that if brands simply turn off the taps on their communications when times get tough, they stand to exacerbate their suffering.

Or, to put it another way, those brands that work at maintaining a relationship with people, and adapt what they talk about in accordance with consumers’ changing needs and sentiment, can lessen the impact of a crisis and put themselves in a strong position to grow when better times return.

Kantar research shows that when a brand stops advertising on TV, for instance, after six months their total brand communications awareness levels are 39 percent lower, with a knock-on effect on consideration and purchase.

But understanding this and being able to put it into practice are not quite the same thing. The WFA study of its members found that while 62 percent of brands knew it was essential to avoid “going dark” during the COVID-19 crisis, they were still making big cuts to overall ad spending.

And there’s more to brands “not going dark” than simply keeping on saying what they would have said pre-crisis.

Research as part of Kantar’s COVID-19 Barometer study showed most people wanted acknowledgement that things were different, even if advertising did not overtly address the crisis. And, crucially, people did not want to see brands appearing to exploit the crisis for their own gains.

Consumers wanted brands to be reassuring, offer a positive perspective, and show how they could be helpful as part of people’s new everyday lives.

*The number of broadband connections in Spain has reached 15.6 million, up 2.9 percent in a year, and a penetration of 33.3 lines per 100 inhabitants.

*Around three-quarters of fixed telephone lines and 97 percent of fixed broadband lines are bought as a bundle with other communications services.

*Mobile phone penetration is still slowly rising, and there are now 118 connections for every 100 Spanish residents.

*There are 48.1 million registered mobile broadband connections, 2.1 million more than in 2018.