Experienced readers of BrandZ reports will know that the media sections of most reports detail ad spending trends in the counties. However, as with everything in South Africa, such trends come with a caveat: there is little correlation in South Africa between investment and success.

The reason is that TV dominates media budgets in South Africa. It’s the entertainment medium of choice for the great majority of the population, even that which lies outside the target set of many brands. But TV spending levels do not always correlate with success in the country—in fact far from it.

We know this thanks to two unique tools we have for analyzing South African media. The first is Adtrack™, Kantar’s proprietary advertising testing system, which has been evaluating the impact of brand advertising in South Africa for over 35 years. The second is the CrossMedia database, which contains over 600 multichannel campaign performance metrics. Both show that in spite of investment in other channels, TV is the king of building reach.

TV also has a knock-on effect to other media, enabling channels like digital and outdoor to perform better. In the chart below, you can see that when TV is out of the mix, ads perform much more poorly. But once you add it in, everything performs better. 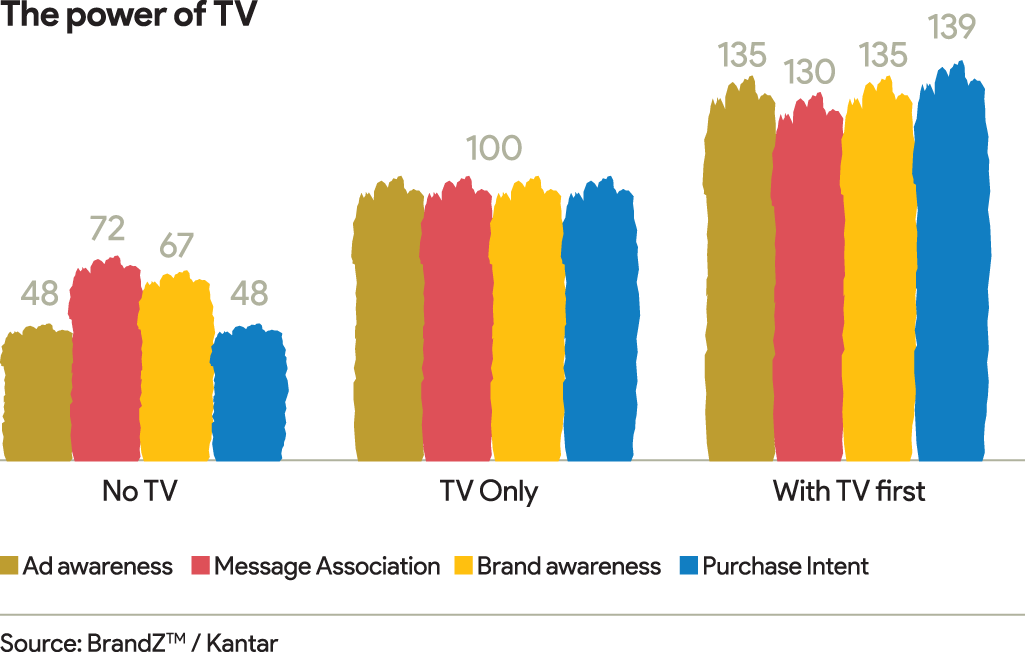 However, merely because you advertise on South African TV does not mean you’ll see ROI. In fact, an analysis of the Adtrack database shows that from January to March of this year, a massive 77 percent of ads failed to resonate with consumers. Forty-nine percent resulted in below average cut through (a proprietary metric similar to unaided recall). In other words, every second ad on TV is a waste of money.

Part of this can be laid at the feet of categories. South Africans are particularly receptive to certain categories of advertisers, and not so much to others. For example, they are extremely open to ads for carbonated soft drinks and fast food (luckily, they are also quite open to ads from dental services). Most of the Top 30 brands, not surprisingly, fall into the top 20 categories that resonate well with consumers, including banks, beer, retail, insurance, fast food, and telecommunications. Just being part of the in crowd helps these brands.

Noting by category in South Africa

For easy reference, this chart illustrates how effective advertising in a particular category is when compared to all advertising in South Africa. The average category would score 100, and anything over 110 indicates a strong advantage.

That said, even if you’re in a great category, it’s also getting harder to break through. Resonance appears to be falling precipitously year over year. Above average cut through has fallen from 37 percent to 23 percent in the last four years. Likely, this is occurring as brands shift from more memorable emotional ads to ones that highlight sales and offers—a shift readily visible on SA televisions. 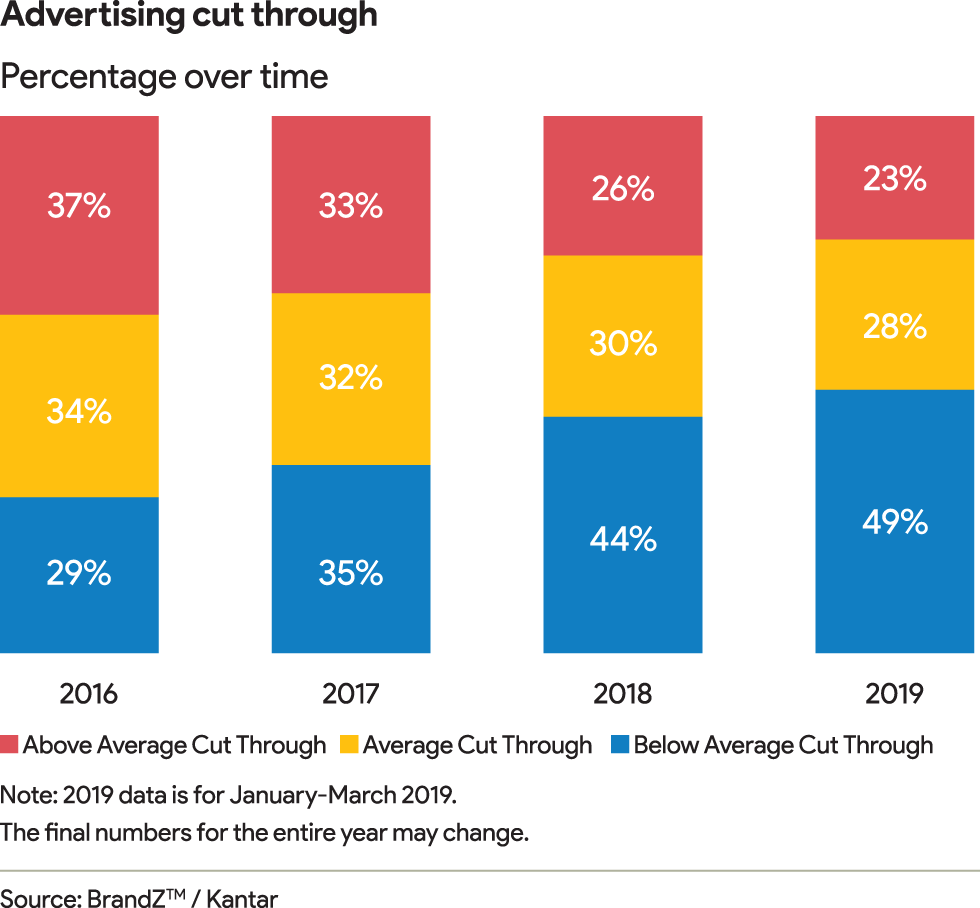 TV advertisers, of course, have choices in their investment, a major one of which is the length of the ad. Is it better to start off with a long, developed story and then shorten it for future executions, or to simply tell one good story in the optimized length?

An analysis of more than 6000 advertisements in the Adtrack Database found no evidence that size matters. Thirty second ads perform the same as longer and more expensive ads. As a result, from a media cost perspective, stick with 30 seconds.

The Kantar LINK database does show that longer ads have the ability to communicate more messages, as well as allow more time to tell exceptional stories. But the most important part of the ad is always where the brand connects the main message with the most memorable part of the ad (this is known as the “creative magnifier”). This is the key element in driving cut through—regardless of ad length.

Adtrack has also shown us something that’s perhaps less than surprising: poor creative will hinder market performance every time.  A survey of 374 ads showed that there is no correlation between reach and above average cut through. Some ads with very high levels of reach had little cut through. This, naturally, shows that the creative was poor.  But there were plenty of ads with the reverse too: low exposure and high cut though. This suggests that they were great ads with too little investment in them. Both represent missed opportunities.

Today, there is no shortage of clutter on South African TVs. Categories and brands need to cut through it and work hard to get the consumers’ attention.  With so much competition, understanding how a campaign cuts through and how campaigns can be optimized, delivers a real competitive advantage.

Finally, grabbing attention is not enough.  Often you hear people rave about an ad, but when asked who the ad was for, they can’t say. And what’s the point of great creative if you cannot link the ad to the brand?  Both your media and your creative need to work in synergy to maximize your marketing budget.

In 2018, Huggies in South Africa hosted the world’s “First Baby Marathon.” The brand, which was advertising its Nappy Pants designed for active crawlers, fitted four babies with motion trackers. The idea was for them to race until the first one reached 21 kilometers. The campaign played out over four videos in which an excited sports commentator detailed the action as if he were covering the Olympics. The end result was 8.4 million views, a listing in Kantar’s Best Like Ads, and a Gold Apex Award (SA’s version of the Effies). More importantly, “First Baby Marathon” also drove a nearly 29 percent increase in sales.

Why did it work? The ads were adorable and used both innovation and humor—and effectively connected them to the value the brand delivers. SA brands tend to do best when they do something different, and the custom baby trackers enabled Huggies to create a race unlike any other. Meanwhile, the deadpan delivery of the narrator made for great laughs—a proven avenue for success in SA. Finally, it didn’t hurt that Huggies somehow managed to find four of the most adorable babies in the world.