li:before{content:"o "}ul.lst-kix_list_1-0{list-style-type:none}.lst-kix_list_1- BrandZ is the world's largest brand equity database. Created in 1998 and continually updated. BrandZ is an invaluable resource, containing data on brands gathered from interviews with over 150,000 people every year in up to 400 studies around the world"> brandZ | Report -
We’ve stopped what we are doing and creating your personalized BrandZ™ report, which will appear in your inbox soon.

A combination of consumer and business confidence is driving steady growth in media investment in Germany. Digital channels are attracting the lion’s share of investment, and are expanding their share every year. But more traditional channels, particularly television but also radio, cinema and outdoor, are also seeing rising levels of spend.

Total media investment was forecast to rise by 1.3 percent for 2018, consistent with the past two years’ growth, when rates of 1.3 and 1.4 percent were posted. This topline figure takes into account a 5.5 percent rise in investment online, and declines of 3 percent for both newspaper and magazine adspend.

Net advertising spend across all media in Germany in 2018 was expected to total US$20.44 billion, according to GroupM. 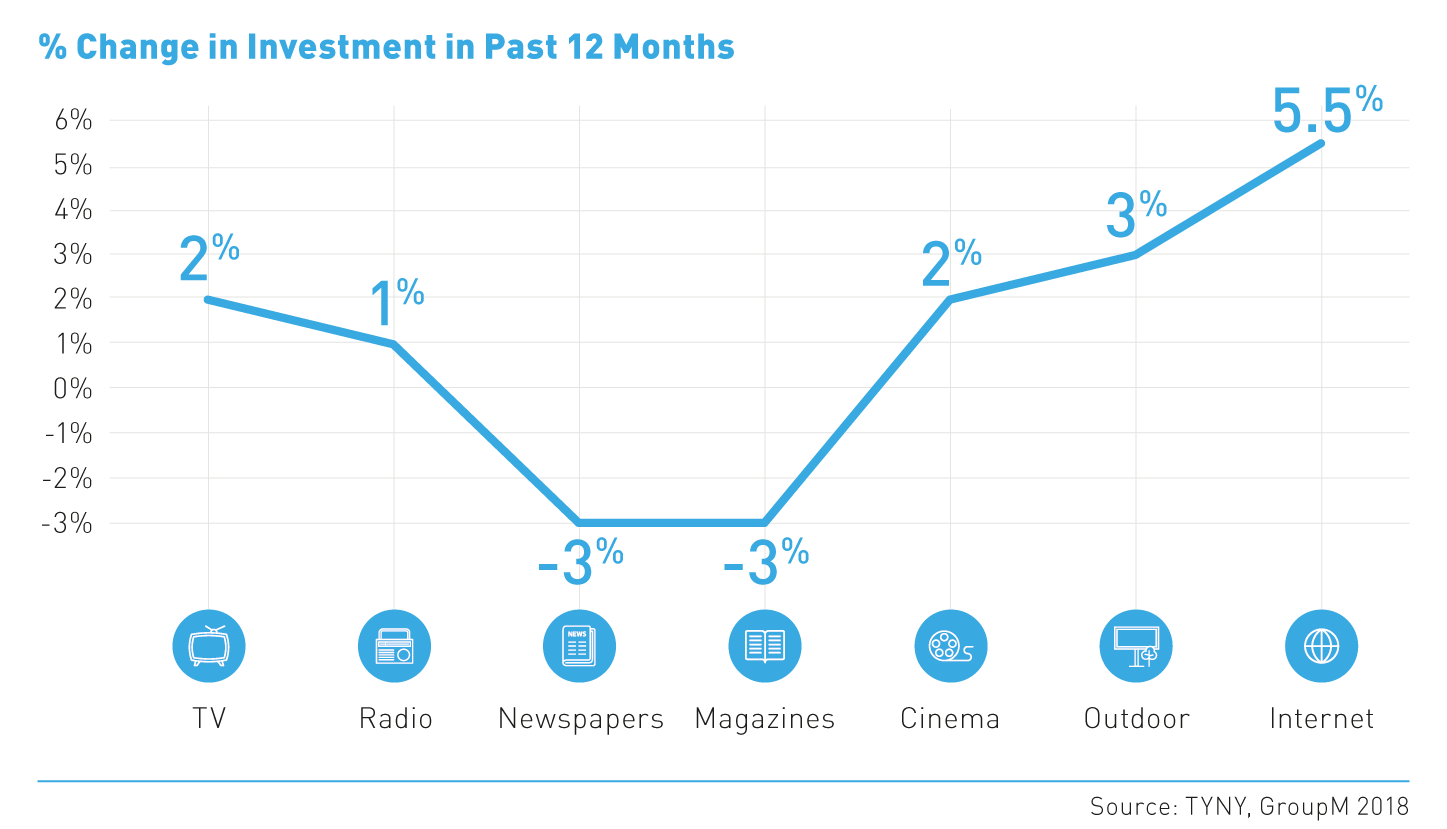 Tuning out? No way

Large numbers of German consumers are still using desktops and laptop computers to go online, and in Kantar TNS’s global Connected Life study, Germany emerges as one of the top 10 most PC-centric countries in the world. This is important to bear in mind for brands and agencies developing online content; while in many markets the stress is on making content suitable almost exclusively for the small mobile screen, in Germany, that would be a mistake.

Even those people who are heavy users of mobile internet still tend to connect via a computer as well, which affects the optimal media and content mix required to reach them effectively.

Television is still hugely influential, and accounts for 34 percent of the time people spend using any media. This equates to an average of 3.7 hours’ watching TV each day, compared to just under three hours per day spent online. This explains why a significant proportion of advertiser investment goes in this direction; in 2018, TV took 27 percent of budgets, and was growing at 2 percent a year.

This used to be a market dominated by newspapers. In fact, it was only in 2015 when newspaper ad investment was superseded by TV and online as the primary destination for advertising spend. Newspapers are in decline in Germany as everywhere, but are holding out better here than in most markets.

The average consumer in Germany still spends over an hour a day reading a print publication, and that explains why 21.6 percent of net national adspend goes to newspapers here, and a further 10.5 percent to magazines.

German consumers are less avid users of social media than others in northern and western Europe, spending around 45 minutes a day on social networks, compared to an average for the region of closer to an hour, and a global average of 90 minutes. The most popular networks are Facebook, WhatsApp, YouTube and Facebook Messenger. The connected world is changing the way brands and consumers relate to each other – but it’s not killing off all the old ways of working.

*Consumers’ media habits are migrating online, but traditional media is far from dead. Balance online and offline for the right channel approach.

*Online video is increasingly popular, but it’s not instead of TV. Think about complementing and boosting the effectiveness of TV ads with online video, and vice versa.

*Social media use and the proliferation of platforms makes effective targeting more difficult, but data and insight show brands how to prioritize platforms and devices with the right content.

*Ad blockers are prevalent, but it doesn’t mean no one’s watching online ads; their availability does, however, force brands to make sure their content is genuinely engaging.