The heart of the Italian home has long been not the dinner table but the television, and although digital media is enjoying a meteoric rise, it has not knocked TV out of prime position.

TV is still the medium to which people devote most of their time, and while advertiser interest in online has taken budgets away from radio, print and outdoor, TV has managed to hold its own. That’s in part thanks to growing viewership of multi-channel TV, which is helping TV spend overall stay broadly stable. Netflix launched in Italy in 2015 and has been producing original series in Italian as well as importing overseas hits.

All of this is keeping Italian TV viewers glued to the box for almost four hours a day, on average, although with mobile ownership high and smartphone penetration at 60 percent of all adults, many viewers are using several screens at once.

The most-watched program of the year in 2017 was the final of the Sanremo song contest, watched by 13.5 million Italians, and taking 58 percent share of the night’s viewing. Other TV hits include the X Factor final, broadcast both on Sky and TV8 in December 2017, seen by 2.7 million people, and the Masterchef final, which has been increasing viewership year by year and in 2017 was watched by 1.5 million Italians.

Almost everyone with a smartphone is using social media, and the social app of choice in Italy is Facebook; an estimated 30 million Italians are on Facebook; 74 percent access it daily, and they spend an average of half an hour on it each day. In late 2016, when then-Prime Minister Matteo Renzi wanted to congratulate US President Barack Obama for his achievements while in office, he chose to do it in a public post on Facebook.

WhatsApp is actually more widely used than Facebook, but is used for less time each month. YouTube is also highly popular, with more than 15 million users. Video and social media advertising have been fuelling growth in online adspend of between 7 and 10 percent a year; by the end of 2017, digital was forecast to account for almost 26 percent of all advertising investment in Italy, up from 10 percent in 2010. Most of the biggest-spending brands on advertising in Italy combine TV with social media and online video.

Overall advertising investment was expected to grow by 1.4 per cent in 2017, driven mainly by rising spend online. Television was predicted to suffer somewhat due to the lack of major sporting fixtures in 2017; the UEFA Euro Cup was held in 2016, the next World Cup football finals are in 2018, and the next Olympic Games are in 2020.

Total media investment by advertisers in Italy was forecast to reach EUR7,746 billion in 2017, marking the third consecutive year of growth. 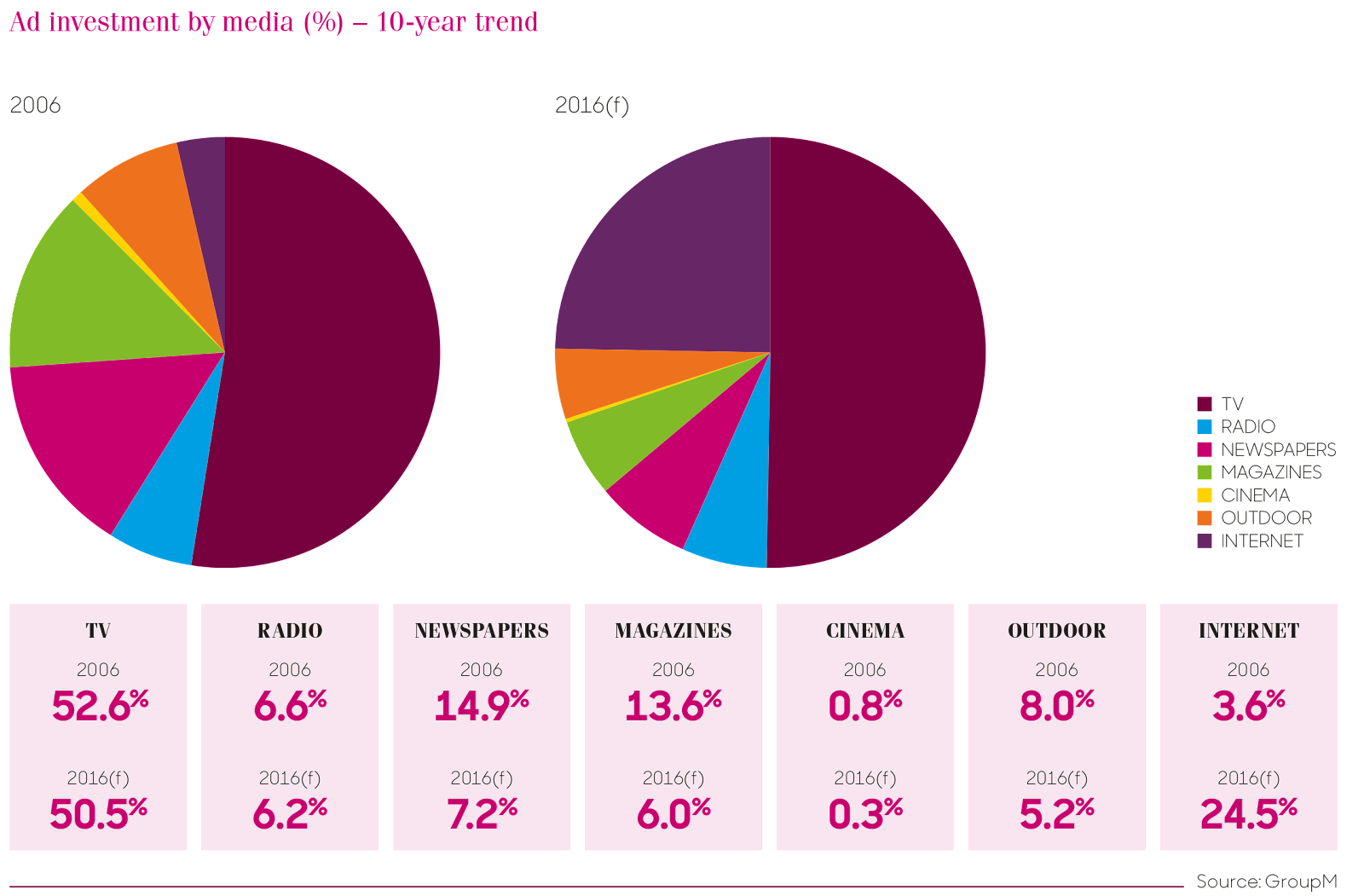 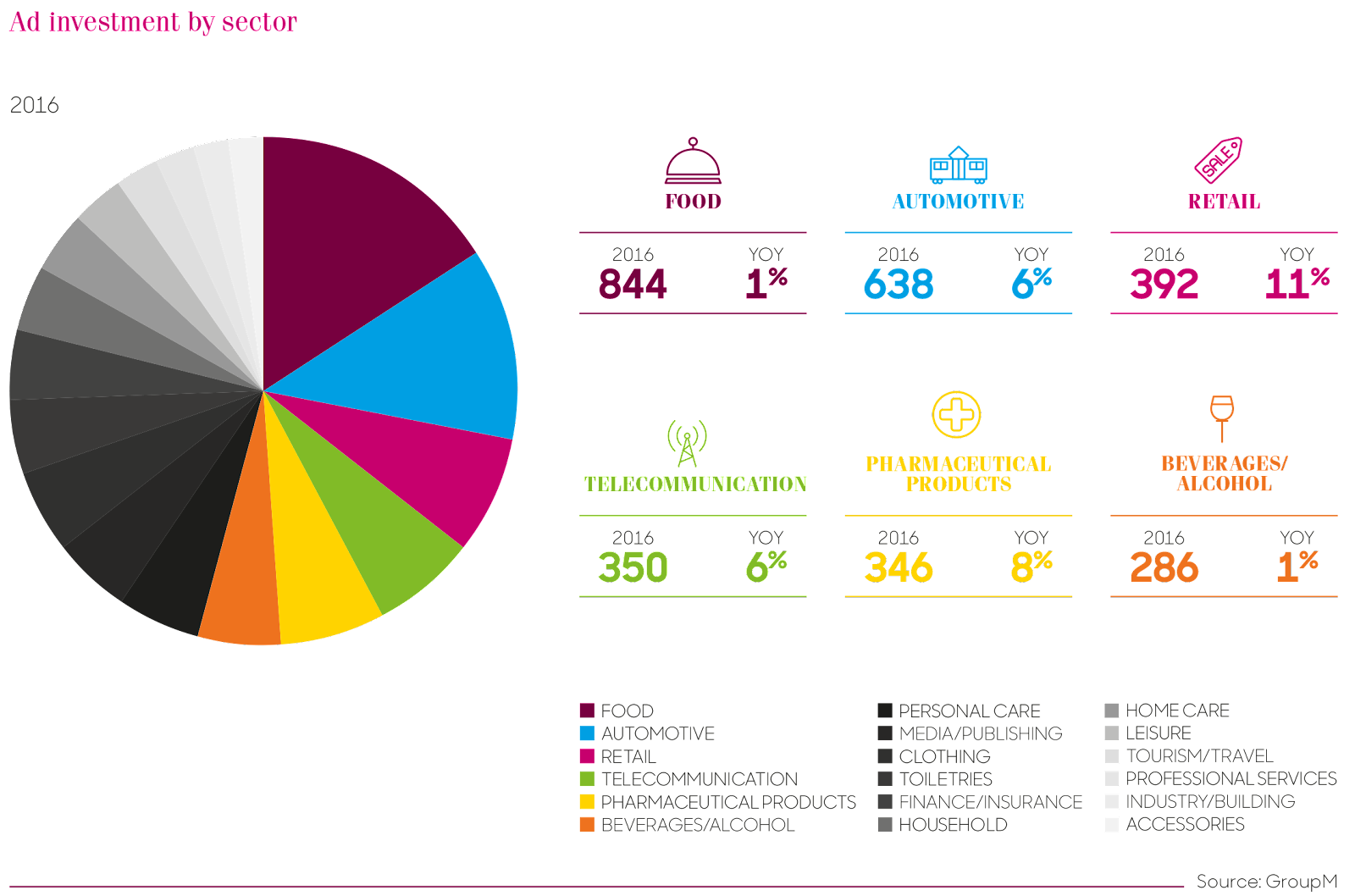 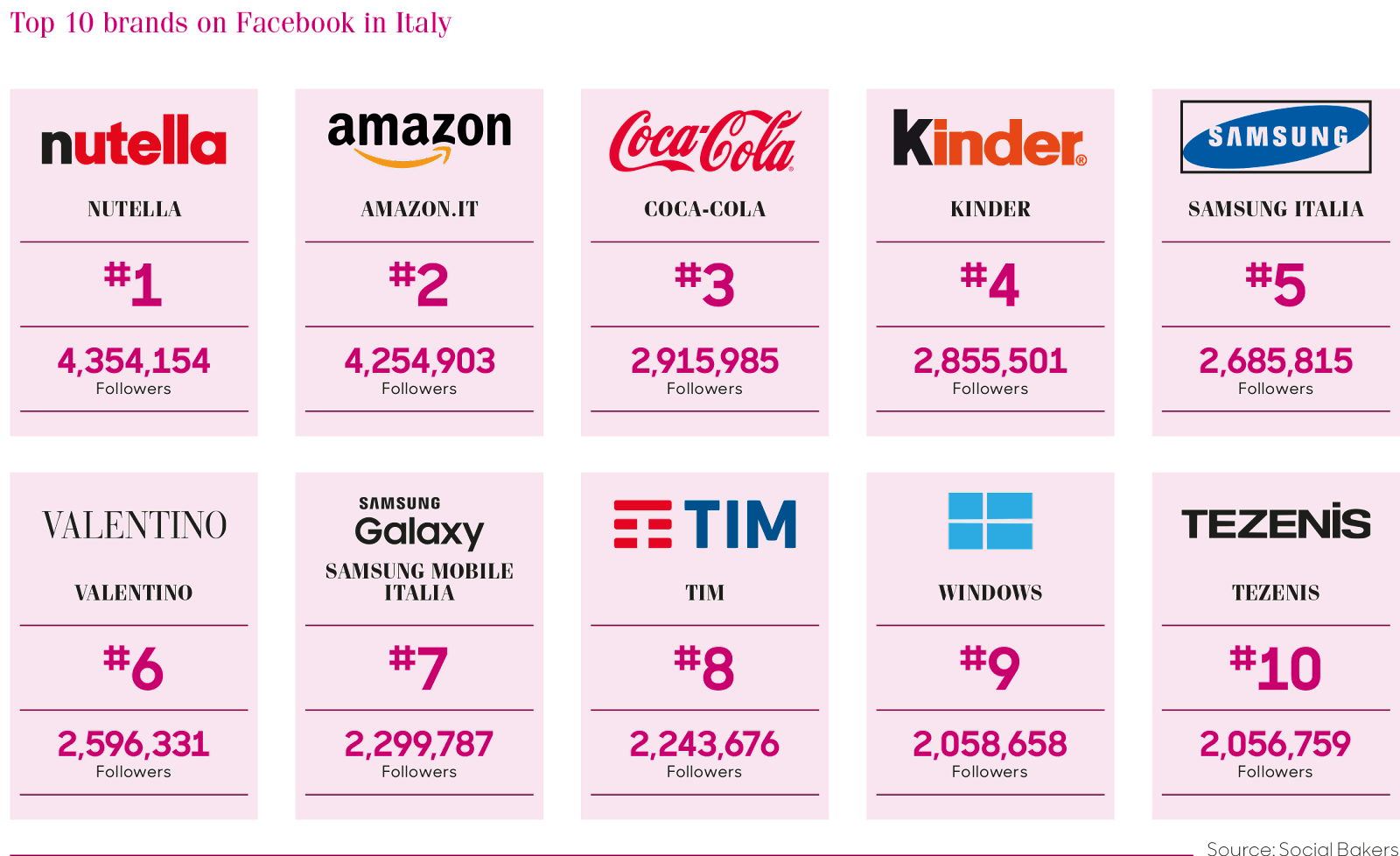 Deploying compelling content across social media platforms is not just a smart way to achieve reach but also a way to build brand value and the strength of consumers’ relationships with brands – maybe even love.

BrandZ research consistently shows that consumers see the brands that invest in digital communications as innovative, and brands perceived as being innovative tend to have higher brand value. Indeed, a look at the most popular brand Facebook pages in Italy shows that love is there, with much-loved Nutella right at the top.

The power of social media in Italy was evident in the Cannes Lions-shortlisted campaign “Censorship for Cancer”, which used content rules on Twitter images to draw attention to a serious message. Pictures of female breasts have, since 2014, been banned unless they use stickers or emojis to cover the nipple area; the national cancer foundation ANT Fondazione launched a campaign urging women to share images of themselves using a hand emoji to meet the censorship rules – and to draw attention to the need for regular breast checks. The campaign went viral and achieved 38 million impressions in 84 countries.

For most brands, the real power of social media is unleashed when it is used in combination with TV and other media. The Vodafone Amici campaign linked an interactive talent contest uniting Facebook and TV. Live chat streams featured on air, and the view came from studio audiences’ smartphones, there was exclusive video content available only through Facebook, and led to 25 million Facebook interactions.

Heineken was behind an award-winning campaign that told a compelling story and used social media and public relations to great effect. “The Dilemma” was inspired by the Italian tradition of football fans watching Champions  League matches with friends. It tells the story of a keen fan who receives a VIP ticket to watch a game live, and is forced to decide whether to give up the chance to watch with his friends. The campaign had no media budget, but achieved more than 8 million views on Facebook and YouTube, and 140,000 shares, retweets and posts.

The era of speed: opportunities and dangers