Vodafone was the top-ranked newcomer, at number 24. Although the emergence of Jio and subsequent price wars have affected Vodafone’s profitability and user base (and recently cost the company its CEO), the company remains popular in metro areas and boasts India’s second-highest subscriber base following its 2018 merger with Idea Cellular. Analysts have also been encouraged by growth in Vodafone’s higher-value 4G and wireless broadband subscriber numbers. If the telecom industry can continue to attract first-time users, and the overall market continues to grow, there is room for multiple telecom brands to win in the future.

Two other providers of utility services, Reliance Retail and Bandhan Bank, also joined the BrandZ™ Top 75, ranking at 55 and 68, respectively. Reliance Retail is India’s biggest player in brick-and-mortar retail, and has announced ambitious plans to expand its private-label offerings and digitize India’s kirana store network through its “New Commerce” plan.

Bandhan Bank, though not as large or well known as India’s major financial institutions, is an exciting addition to the BrandZ™ India Top 75 thanks to its unique history and commitment to social improvement. Bandhan was founded as a microfinance organization in 2001 and became the country’s largest microfinance institute in 2010. It then entered the banking industry in 2015. Provided that the brand can find ways to make more Indians aware of its compelling story, Bandhan Bank has a natural potential for cultivating high perceptions of Meaningful Difference.

Meanwhile, the world of consumer-focused tech services has three strong new entrants in Oyo, Swiggy, and Zomato (ranked 30, 39, and 61, respectively. Swiggy and Zomato have led India’s restaurant home-delivery revolution with addictive deals and smart “last-mile” infrastructure. They are well-poised to take on Amazon ahead of that American company’s entry into the restaurant delivery space; they are also poised to expand in their own rights into new markets and categories. Hotel-booking app Oyo’s entry on the list, meanwhile, is a further testament to the strength of India’s tech scene, as well a sign of strong demand for travel and new experiences among Indian consumers.

Alongside double-digit category growth from returning household brands in the Top 75, the debut of Good Knight and Nirma are further evidence of the resilience of Indian FMCGs. Good Knight continues to innovate with new formats of kid-friendly mosquito repellant, and has a strong purpose in helping India’s parents to eradicate of malaria. Nirma sells one of India’s most widely-distributed laundry detergents (it was an original disruptor in that category), and makes other household goods; it is also in the midst of a push to become a major commodity conglomerate. 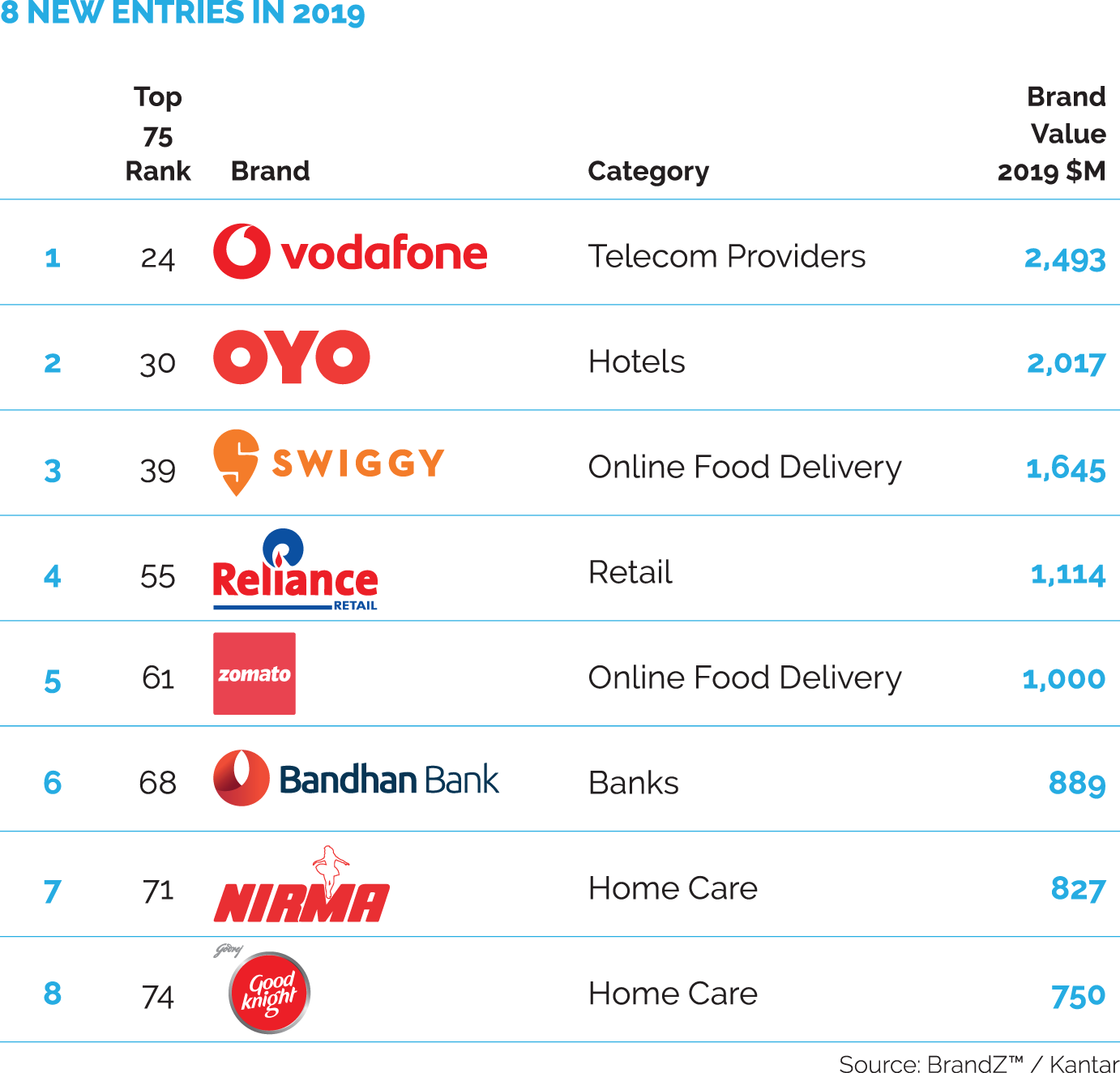