The recovering global price of crude oil strengthened the oil and gas category, but brands also felt the impact of new costs, sanctions imposed on Russia, and the rebalancing of China’s economy from production to consumption. As brands adjusted to price unpredictability and the transformation from oil to gas and energy alternatives, the category increased only 1 percent in value, compared with a 5 percent increase a year ago.

The major integrated oil companies, with exploration and refining businesses, continued cutting costs to reach profitability even with weakened oil prices. The Brent crude price approached $70 per barrel, after trading as low as $28 during the past few years, but it remained far below all-time highs. The majors planned for meeting the world’s immediate energy needs, while preparing for the future, but how they balanced those imperatives divided according to where they are based.

For the US-based majors, shifting to shale oil and gas exploration was the key priority. European brands focused more intensively on the transition to gas and, eventually, to other alternative fuels. Most companies reduced deep water exploration that requires decades to achieve a return on investment. And, generally, the companies with downstream, consumer-facing operations, benefited from a counter cyclical business, where retail margins rose as the cost of oil declined. 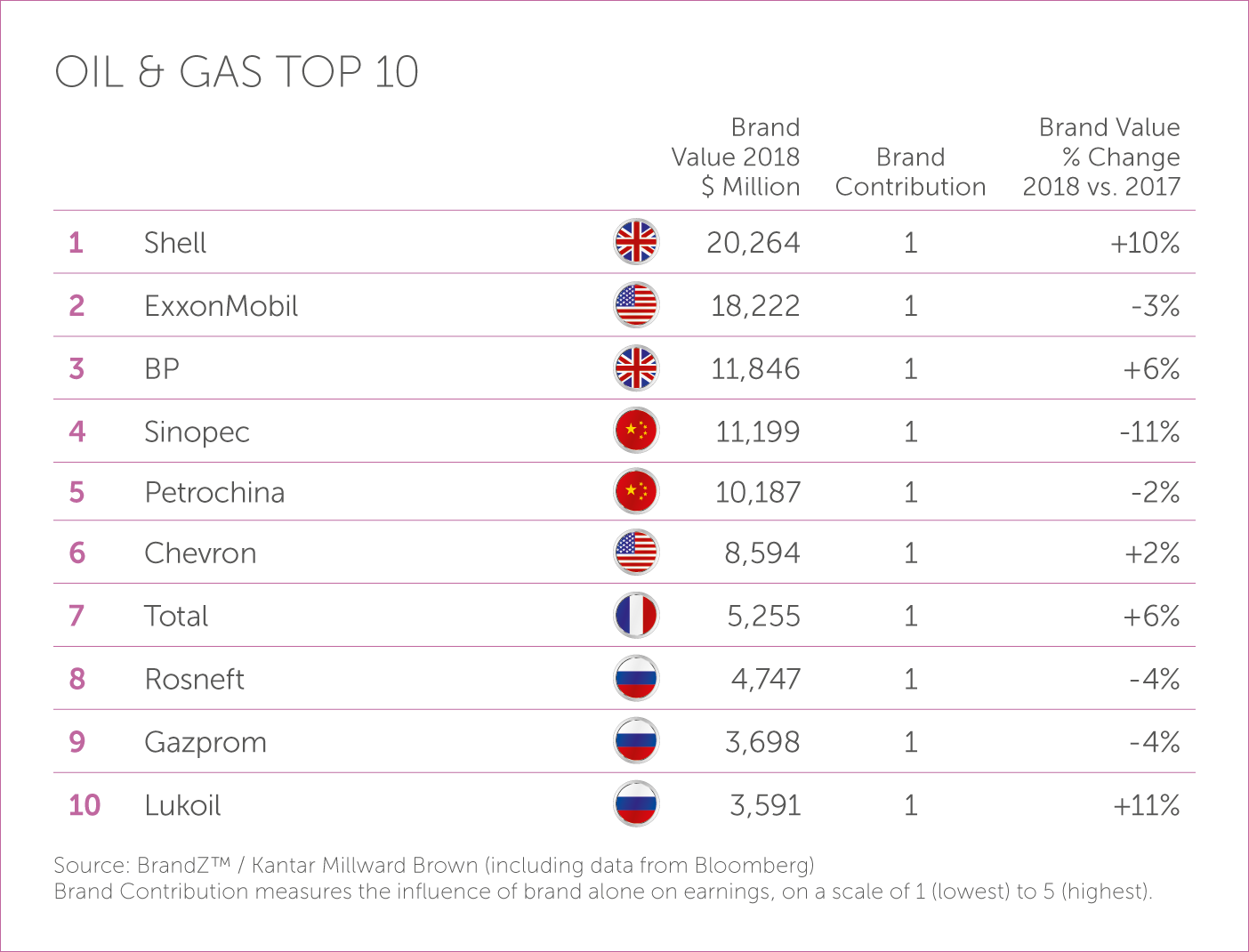 The majors overall supported the Paris Climate Accord and efforts to impose a tax on high users of carbon fuel, which would add certainty to the price of carbon and perhaps provide incentives to develop new technologies for the post-carbon world. A recent study by BP predicts demand for oil to peak around 2035, earlier that previously predicted, then plateau for a few years before declining.

Shell shifted the balance of its holdings from oil to gas and increased its investment in renewables. ExxonMobil, headquartered in Houston, discovered the energy future in its own backyard and invested heavily in shale operations is places like the Permian Basin in Northwest Texas. Because of cost cutting, Shell was able to more than double its profits, even with the lower oil prices. Refining operations hurt ExxonMobil profits and drove down the stock price. Shell surpassed ExxonMobil as No. 1 in the BrandZ™ Oil and Gas Top 10.

ExxonMobil, and other US companies, accelerated the US drive to become energy self-sufficient, even a net energy exporter of refined products as well as crude oil and liquefied natural gas (LNS). In shale exploration, scale can be a disadvantage, at least initially, because smaller, Specialized Exploration and Production Companies (E&Ps) have the expertise and nimbleness to capture the shale business.

Shell invested more in renewables and also planned to leverage its network of over 44,000 fuel stations worldwide, adding another 10,000 locations and including more services, possibly potentially electric charging stations. The retail product mix would be adjusted, with non-fuel products accounting for half of revenue by 2025.

BP is also changing the product mix in its retail operations. And it acquired 43 percent of UK solar company, Lightsource. Total bought a major stake in Saft, a battery maker. It also bought LNG assets from Engie, a French utility, and a stake in Eren, a French renewable energy company. Statoil and others invested in offshore wind technology. Shell bought First Utility, an electricity supplier and it owns Silicon Ranch, a US solar producer.

Downsizing and cost efficiencies made since the 2010 Deepwater Horizon disaster enabled BP to make money even when global oil price hovered at historically low levels, although costs associated with the oil spill and the US tax reform impacted profits. Chevron rose modestly in brand value based on production increases in Australia and Texas, but costs associated with hurricanes in the US hurt profits.

Both Sinopec and PetroChina, Chinese brands, decline in value primarily because they complied with the Chinese government’s desire to reduce over production and stimulate demand. And they encountered competition from independent refineries that have appeared with liberalization of the oil and gas sector. Rosneft and Gazprom declined in value because of the impact of sanctions against Russia, although Lukoil value rose based on higher profits and margins late in the year when oil prices increased.

Saudi Arabia prepared for an IPO of 5 percent of Aramco, the Saudi national oil company. The IPO would provide substantial funding for the national agenda to broaden the Saudi economy beyond oil dependence, and undergo social transformation. A successful IPO would also confirm that oil and gas remains a strong investment for the foreseeable future.

Communicating to influencers and decision makers remained vital to oil and gas brands, primarily business-to-business enterprises that depend on their corporate reputations to obtain licenses to operate and to maintain productive industry partnerships.

Reaching consumers—and clarifying the brand and its purpose— will become more important to oil and gas companies with the shift from oil and the growing importance of retail as source of new revenue and profit. Brand will be important for building customer loyalty, but also because the consumers’ voice will be amplified in the conversation about the energy issues.

In the US, the increase in drilling locally, rather than in remote locations, should increase the importance of brand because permission to drill will become more reliant on consumer opinion. Companies are increasingly trying to put a human face on their brands as consumers are more empowered today as influencers.

ExxonMobil’s latest communication is “Energy Lives Here,” with narratives focused on carbon capture and storage. ExxonMobil has an online newsletter called The Energy Factor, which highlights scientific achievements as well as social responsibility initiatives. In their straplines, many of the brands acknowledge a commitment to an improve energy future: Total promises it is “Committed to Better Energy”; Chevron has its upbeat “Doers” campaign; and Shell declares, “Make the Future.” 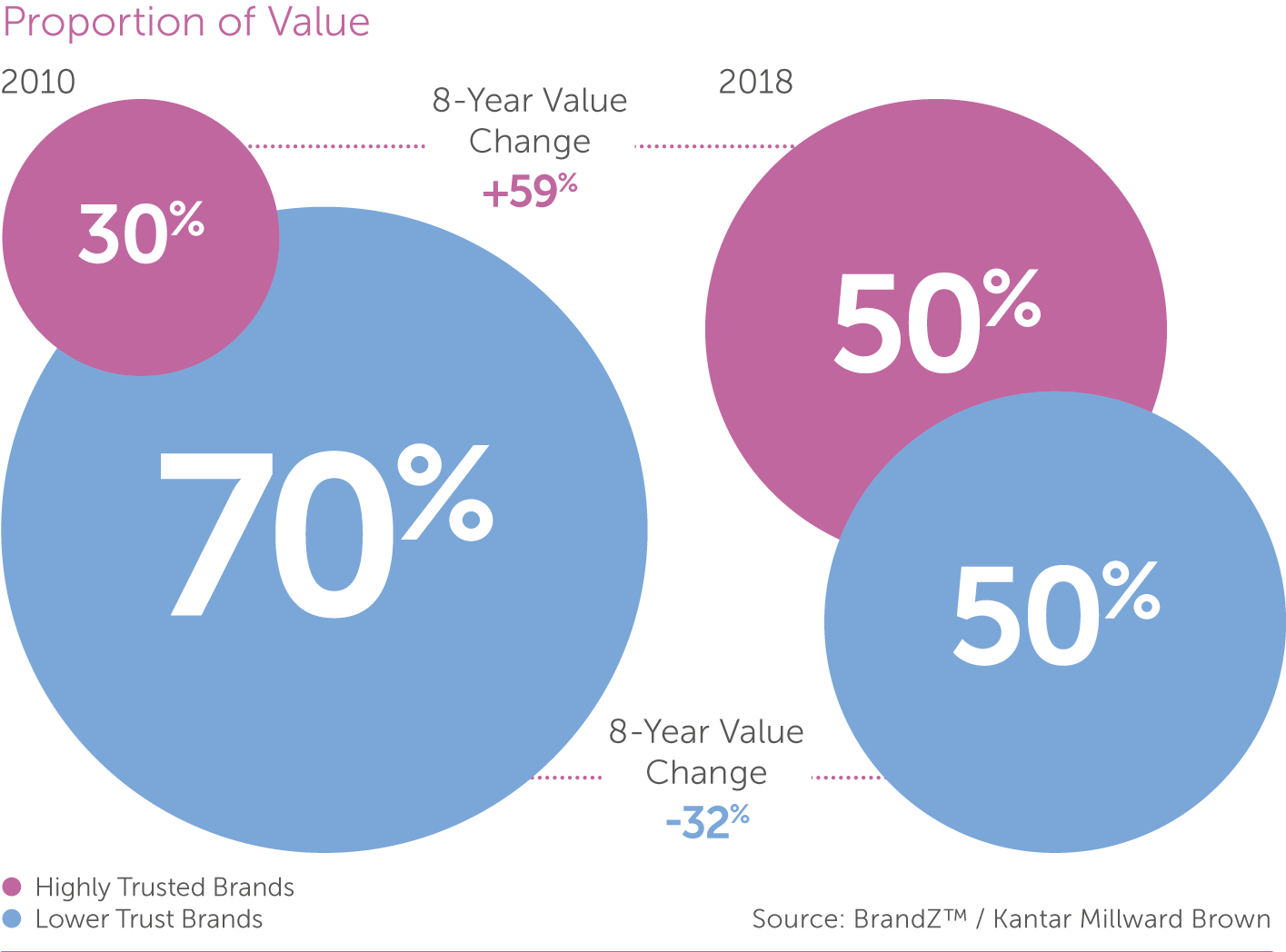 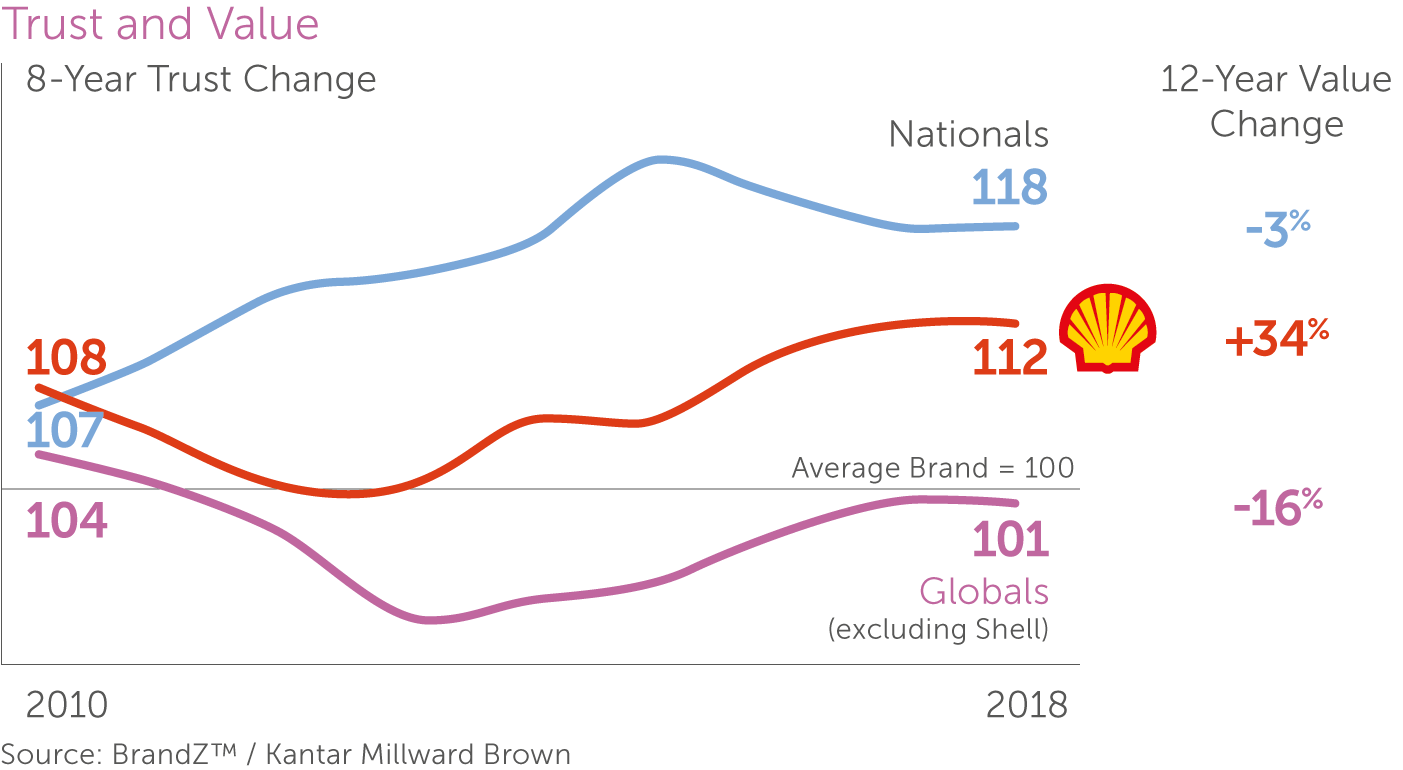