On the brink of international stardom

On the brink of international stardom

Welcome to the inaugural edition of the BrandZ™ Top 40 Canadian Brands. Canada’s entry in the BrandZ™ family of rankings is perhaps the smallest step it has recently taken in raising its profile around the world.

In recent years Canada has found itself unexpectedly thrust into a leadership position on the world stage. As many countries have retreated into nationalism and division, the country has remained politically stable and stayed strongly behind its pluralistic values, generous social welfare system, and embrace of immigration. It is emerging as a vocal and confident leader, with a voice generally of moderation and tolerance in an era in which such a stance often struggles to gain a share of the conversation. As President Obama famously declared, the world needs more Canada.

One reason is that while xenophobia can easily sweep into power in other countries, multiculturalism has long been a part of the fabric of Canadian life. In addition, many of the issues causing social upheaval elsewhere, have largely left Canada unscathed. For example, the country has a well-regulated financial sector that kept it largely immune to the financial crises of the past decade—a fact reflected in the strong showing of its banks in this year’s BrandZ™ research.

As a result, more and more countries are looking to Canada and listening to what it has to say. For example, in this BAV Best Countries Report, an annual survey that polls international opinions on different nations, Canada sits at third globally, with a reputation behind only that of Japan and Switzerland. People around the world rate it highly on measures like trust, citizenship, and transparency. It also ranks at the very top of places others would like to live, a reflection of its reputation for safety, security, and family life. In a world filled with uncertainty and turmoil, Canada looks better every day.

Economically, however, Canada’s outlook is decidedly more ambiguous. Facing severe headwinds, real GDP growth has slowed to a crawl, rising only 0.1 percent in the first quarter of the year. The biggest risks come from trade. With a resource-rich economy, Canada is experiencing friction over trade with China and the US—and is turn being affected by the much larger conflict between the two. In addition, rising interest rates, lower commodity prices, and a cooling housing market in Toronto and Vancouver have not helped matters.

Still, Canadians are by and large are content with their personal financial situation. Personal incomes are up a healthy 3.4 percent year over year in 2019, while inflation remains low at 2 percent. According to Kantar’s Canada Monitor, 58 percent of Canadians feel good about the direction they’re headed in, while an encouraging 78 percent feel good about their personal financial situation. The balance of short term prosperity and long term concerns is creating a situation in which consumer confidence tends to seesaw almost day-to-day. While not an encouraging sign for brands, it could be much worse—and it might get a lot better.

Canadian brands: healthy or not?

With this year’s BrandZ™ ranking, it’s probably best to focus on the good headlines first. Canada’s Top 40 brands clock in at a cool $143.6 billion. This puts them roughly in line with the average value of their global counterparts—and when adjusted for GDP, slightly above average. Canadian businesses also derive roughly the same value from their top brands as do those in other countries.

However, if Canada itself is in an enviable global position, its brands have their challenges. BrandZ™ uses three metrics (each compiled from many smaller ones) to help determine brand value: Meaning, Difference, and Salience. While we will go into this topic in detail in the Big Themes section of this report, it bears mentioning that top Canadian brands tend to derive most of their value from Salience. This is how famous and present they are in people’s minds.

Canadian brands also do not score as well on Meaning and especially Difference, with top brands scoring only slightly above the average Canadian brands. Canada does have highly differentiated brands. Among the Top 40, Tim Hortons, Lululemon, and Canadian Tire are highly distinct. And so are many brands that lack the financial strength to break into the Top 40, like Rabba, Tangerine, The Keg, and Kicking Horse. 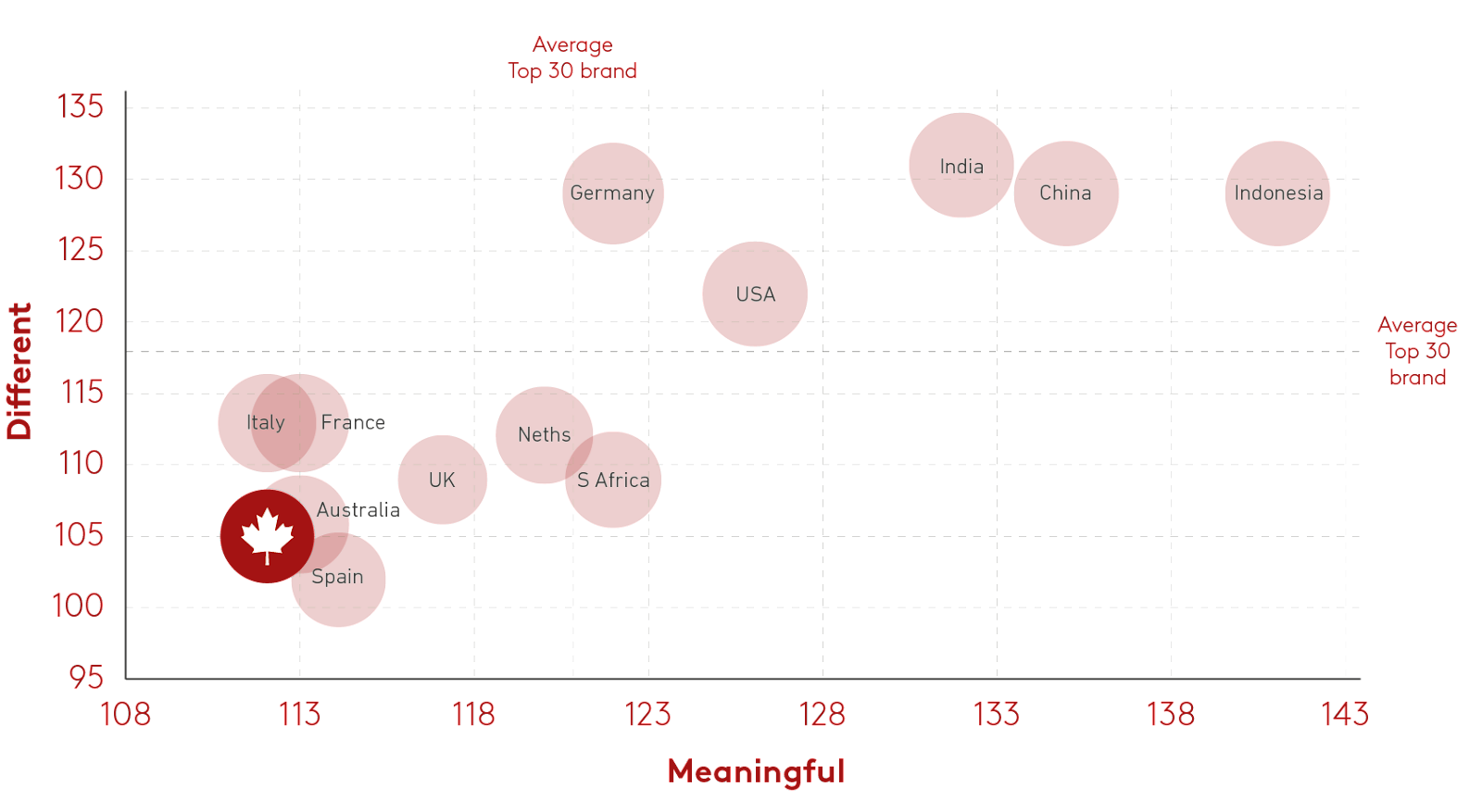 However, context. One major factor affecting the health of top brands in Canada is their categories. The Canadian rankings are dominated by two sectors: banking and telecom providers, which account for more than two thirds of the total brand value. Banking by its nature is a largely undifferentiated space, and while Canadians hold their banks in high regard by comparison to other nations, they are still banks.

If banks are generally seen as good, telecom providers are an entirely different matter. Canada has heavy restrictions on foreign ownership of its telecommunications sector. As a result, local providers often have little competition is really. This has left Canada with high data rates, especially when compared to its southern neighbor, and new “unlimited” data plans that have what any reasonable person would consider limits. Thanks to these and other annoyances, Canadians have little love for their telecom providers, which drags down the overall brand health of their top brands.

The most important consideration, however, may be the Canadian consumer. Put frankly, they are a tough crowd. Unlike people in most countries, Canadians do not consider income or possessions, including brands, to be status symbols. According to Kantar’s Canada Monitor, only 31 percent of Canadians buy brands to show how successful they are. They are also highly practical shoppers by global standards. Eighty-six percent of them are always on the lookout for sales, a 13 point increase over global averages, while 67 percent say that price is more important than brand name.

Canadian consumers also lag their global counterparts considerably in receptivity to advertising, which is a central part of brand building. According to Kantar’s AdReaction, globally 50 percent of TV audiences view ads as very or somewhat positive. In Canada, the number is 37 percent. And it doesn’t get any better from there. When it comes to mobile digital ads, only 17 percent of Canadians are receptive vs. 28 percent globally. In social media, it’s 22 percent vs. 33 percent.

While brand managers may not like this, it does go a long way to explaining why top Canadian brands score poorly on a range of metrics relative to their global counterparts—and why we should probably view their metrics on a relative rather than absolute basis. That said, it doesn’t seem fair to fault a nation for its lack of materialism and generally healthy attitude towards possessions. Canadians may be a psychologist’s dream, but they can be a challenge for marketers. As a result, great brands must work extra hard to provide unique and consistent value over their competitors.

Breakout on the horizon?

What happens next? For some brands, the future seems especially bright. Since the fall of Blackberry, Canadian brands (excepting banks) have largely stayed inside its borders. Many of the names in the Top 40 ranking are likely to be unfamiliar to those outside the country. However, that may be about to change. Several brands—Tim Hortons, Lululemon, Aritzia, and Canada Goose, among them—are setting their sights on the wider world. If so, they’ll likely to be able to lean into the country’s excellent reputation as they venture abroad.

With this potential development and the low Meaningful Difference of several top brands, the Canadian BrandZ™ rankings will likely prove volatile and unpredictable in the coming years. With the country’s southern neighbor going through a bout of unrest—and the rest of the world not far behind—Canada will likely remain its sane and happy self, but its brands won’t be able to completely control their destinies. Volatility is always a challenge, and Canada’s brands will have to work hard to stay on top of it. For now, though, the country is enjoying a new and hopefully enduring moment on the international stage. Because no matter your perspective, the world could probably use a lot more Canada.