Ready For Something New?

Ready For Something New?

There are 26 new brands in the latest BrandZ UK ranking, which this year has been extended from the Top 50 to the Top 75 Most Valuable UK brands. While most of these newcomers occupy places towards the lower end of the league table, a few have brand values that have propelled them right up to the higher echelons. Castrol is the highest new entrant of the year, debuting in 23rd place with a brand value of close to $2.8 billion. Five other brands also made it into the top two-thirds of this year’s table.

While the other new entrants to the ranking are lower down the list, they are having a powerful effect on consumers, helping reshape expectations of service, experience and value, with a knock-on effect that reaches not just others in their category, but beyond.

While new brands in the BrandZ UK ranking are smaller than those appearing in last year’s list (with an average brand value of just $1.1 billion, compared to the others’ $4.9 billion average), they have much in their favour.

The newcomers to the ranking have less Brand Power than the returnees; Brand Power is a measure of consumer predisposition to choose a brand. But they are strong in several areas that show they are potentially strong challengers to more established brands.

New brands in the ranking this year have higher “different” scores than the returnees (113 versus 110), and they are also more innovative. Consumers perceive them to be creative and, perhaps most importantly, to be “shaking things up”. 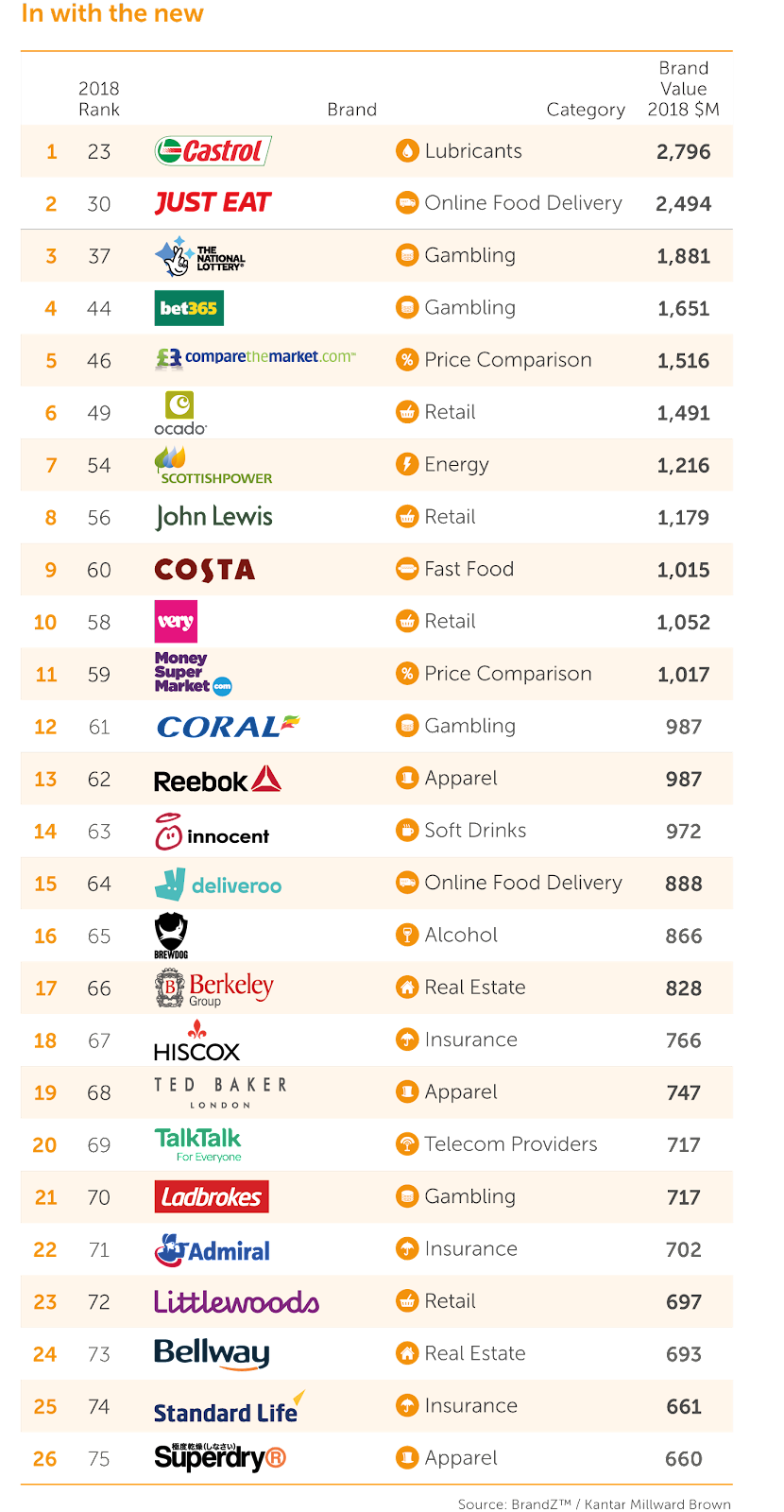 BrewDog is the only beer brand to appear in the UK rankings – quite an achievement considering it has only been available since 2007. This Scottish-made craft beer stands out in a crowded category for being Meaningfully Different from the competition in a way that the country’s biggest beer brands are struggling to achieve. When compared to five other beer brands – Carling, John Smith’s, Greene King, Tennent’s and Tetley’s – BrewDog outperforms this group on a range of BrandZ measures that correlate with consumer love and high brand value. It excels at communication (30 percent better than the average brand, while the big five underperform other UK brands), probably helped by its “One Million Pints” giveaway campaign. It also beats the more well-established brands for having a strong purpose, for innovation, for experience and for brand love. While BrewDog has a Meaningfully Different score of 132, making it 32 percent stronger on this metric than the average UK brand, the other beers manage just 81.