Retail had a good year—but not all retailers. Those that effectively mixed online with offline did well, and the e-commerce leaders did even better. The retail category increased 35 percent in brand value, more than double the 14 percent rate of a year ago. But three of the BrandZ™ Retail Top 5 drove much of the gain, with No. 1 Amazon up 49 percent and the two Chinese e-commerce leaders, Alibaba and JD.com, rising 92 percent and 94 percent, respectively.

Holiday shopping, an important barometer of category health, was strong in most markets, particularly the US. It seemed as if the retailer survivors of the e-commerce disruption and category transformation had adapted to the new reality. But certain sectors within retail continued to struggle and prospects overall were nuanced. 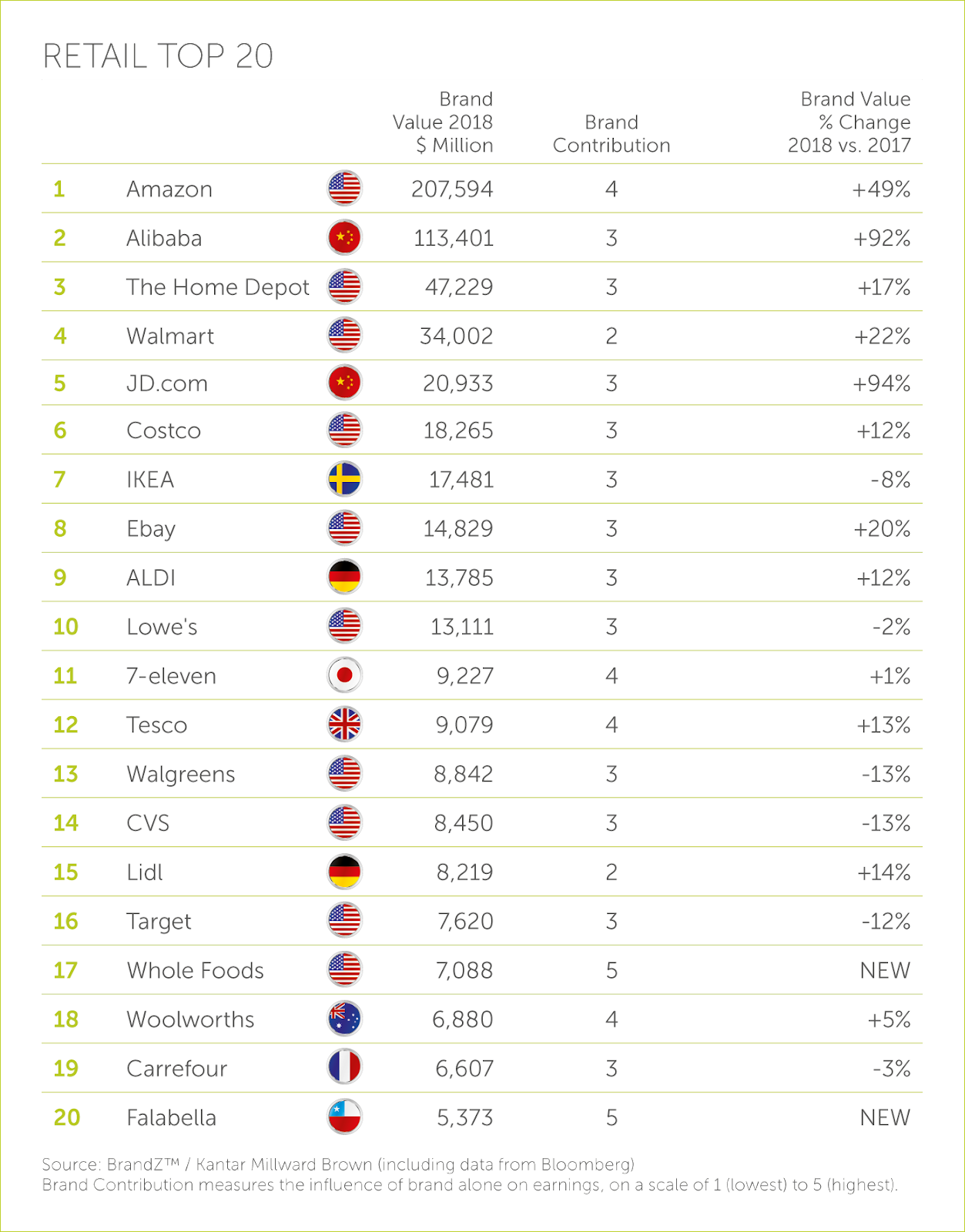 Inflation with potentially higher prices justified retail’s optimism, but rising interest rates tempered the mood. Higher interest rates would pressure some retailers to restructure debt or face rising costs, a problem for companies that have been marginally profitable, and a potential trigger of further industry consolidation.

The integration of brick and mortar and virtual shopping reached a new stage. The strongest value rises came from the pairs of retail brands that aligned to enable the consumer to seamlessly transition between online and offline, while providing the brands with an unprecedented trove of data that reveals shopper behaviors at all moments along the circuitous path to purchase.

The Chinese versions of this online and offline marriage were Alibaba and JD.com, both of which have acquired or aligned with bricks and mortar operators. The US versions were Amazon, owner of Whole Foods; and Walmart, which had purchased Jet.com. The scale of these giants, and the contrast in their business models, is best illustrated by the results of one-day special promotions. Alibaba, which operates, in part, like enormous shopping malls of independent retailers, and has 515 million active customers, sold $25 billion during Singles Day. Amazon, which more resembles in individual retailer, sold over $1 billion during Prime Day.

Alibaba CEO Jack Ma invented the term New Retail to describe how a business based on a simple exchange between buyer and seller has evolved to a complex integration of data-enriched online and offline selling platforms linked with sophisticated logistics that together form a system in which the retailer can anticipate the customer’s needs and fulfill them quickly, accurately, and consistently with pick-up or deliver options. Amazon CEO Jeff Bezos summarized the attitude needed for success in this new world: “It’s always Day One.”

Symbolically echoing these developments, Walmart shortened its name from Walmart Stores to simply Walmart. Walmart repurposed many stores as fulfillment centers. But the business of retail became more complicated, with multiple ways to order or receive merchandise and physical store space repurposed to accommodate both showrooms and shopping areas and distribution centers.

Products were purchased on mobile, or a PC, or in a physical store, and the product was delivered from a fulfillment center or a physical store. Pricing was more dynamic. Jet.com, for example, could adjust prices based on the proximity of the customer from the retailer fulfilling the order. Jet.com also purchased several online startups, including the apparel brand ModCloth.

Perhaps illustrating the ultimate conflation of purchasing and delivery, a startup named Cargo planned to enable drivers for rideshare operators to sell convenience store merchandise from compact displays in their cars. In a partnership with Westfield, the shopping mall developer, Uber planned to establish lounges in malls across the US. The arrangement enables Uber to offer a more premium experience, and it potentially increases time and money shoppers spend in the mall, because they can leave purchases in the lounge instead of schlepping them.

Most dramatically, Walmart, which operates over 11,000 stores worldwide under the Walmart brand, announced intentions to acquire one of America’s largest healthcare providers, Humana. A Walmart entrance into healthcare stretches not only the brand, but the very definition of retail. Often enabled by new technologies, retail is transforming into elaborate networks capable of recognizing and rapidly fulfilling consumer wants and desires across an ever-expanding range of products and services.

In a move toward vertical integration, America’s second-largest drugstore chain, CVS, plans to combine with Aetna, a health insurer. Walgreen’s, the largest US drug chain, expects to buy roughly half the stores of Rite Aid, America’s third largest chain. And Walgreens corporate parent, Walgreens Boots Alliance, announced plans to acquire a major drug distributor, AmerisourceBergen. Walgreens and CVS both declined in value, in part because of competitive pricing of generic drugs.

Amazon launched a potentially transformative technology in its Amazon Go stores, the grocery outlets that track purchases through the shoppers’ smartphone, eliminating the need for shelf pricing, and checkout, the greatest pain point of most supermarkets. Along with improving the customer experience, this technology potentially tells the retailer exactly how many units of each product are available in each store, and this precision could enable a retailer to fulfill an e-commerce order from any of its stores. Walmart experimented with a similar technology.

Ultimately, the most disruptive technologies used by Amazon—voice and automatic replenishment—limit or narrowly focus choice. Amazon’s Dash program enables consumers to reorder certain commodity products with a touch of a button. In partnership with certain manufacturers, some product packaging contains a chip—the equivalent of a Dash button—that recognizes when the supply is depleted and automatically reorders.

The success of this technological wizardry, much of it conditioning consumers for smart home living, depends on the scale of Prime, Amazon’s customer membership program, with around 90 million members in the US alone. Amazon is using Prime, its membership program, strategically and in different ways across country markets. Prime membership predisposes people to search first on Amazon.

In a relevant use of augmented reality for personalizing the retail experience, both IKEA, Lowe’s, and The Home Depot introduced smartphone apps that enable consumers to see how furniture would look in a room in their home. IKEA purchased TaskRabbit, an online service that connects people with tasks to do with people willing to do them. IKEA expects TaskRabbit to improve the experience of assembling its flat-pack furniture.

Lowe’s is experimenting with in-store 3D printing and increased customer use of digital. Lowe’s also expanded its contractor business. The Home Depot planned to develop a business-to-business e-commerce site. As the US economy expands, The Home Depot continued to experience strong same-store results, benefiting from investments made during the downturn 10 years ago. The brand planned to now double the investment in its stores.

Grocery is the one area where Amazon has a disadvantage because of its relative lack of physical locations and the growing popularity of click and collect in the US. Although the instances of click and collect has expanded in the US, the acquisition of Whole Foods by Amazon being a key example, it has not yet reached the ubiquity found in Europe.

In contrast, Alibaba has taken another approach, seeing itself not primarily as a retailer but rather as an enabler of brands and other small businesses, a role that it commemorated with its first traditional advertising, which was themed “To the greatness of small,” and aired during the Olympic Winter Games, in Pyeongchang, South Korea.

So far both Amazon and Alibaba have had success with their respective models, outside their home markets. And they have picked up valuable lessons. In India, Amazon created a network of local stores that house inventory and become a local distribution center, which serves Amazon’s last-mile delivery challenges and also improves the business of the local retailer. Pricing Prime at an affordable level has helped accelerate Amazon’s growth in India.

The two German-owned discounters, ALDI and Lidl, continued head-to-head competition. Lidl entered the US and ALDI responded by expanding into the states where Lidl opened stores, in the Southeast. ALDI launched an e-commerce-only business on Alibaba’s Tmall in China. Lidl responded with a Lidl store on Tmall. ALDI is selling organic products from Australia. Lidl is shipping products from Germany, implying high quality.

The discounters generally are shopped more frequently than traditional supermarkets. To keep customers interested, the chains will introduce brands opportunistically, while they still attempt to keep their basket around 30 percent cheaper than the competition. Getting to that level requires managing the supply chain to constantly change a large portion of the mix. The challenge increases as the store count grows. For example, Lidl, which recently entered the US, has about 11,000 stores worldwide.

ALDI continued its expansion in Australia, where it operates around 500 stores. The German supermarket Kaufland entered Australia amid rumors that its sister brand, Lidl, would soon follow. Sales for Australian supermarket Woolworth’s rebounded as the company invested in improvements in its use of digital and data.

Tesco operated over 7,000 stores in 10 countries, using eight formats. In its home market, the UK, where Tesco continued to face intense competition ALDI and Lidl, it took a back-to-basics approach to be more price competitive. Tesco also sought opportunities from its recent acquisition of Booker, a food wholesaler. In the rest of Europe, where it faces other hypermarket competitors, Tesco worked to perfect its omni-channel operations, including click and collect. It attempted to build greater loyalty in Asia.

Costco launched in Iceland and in France, with more of a long-term investment, intending to succeed with an approach that has worked well in Europe and Asia-Pacific—catering to the food culture with alcohol, difficult-to-obtain products, meats, and cheeses. In some markets, the stores have tanks with live seafood. Costco stores also have a strong business in auto care.

Carrefour performed well outside of France, its home market, but France still drives around half of its profit. In France, Carrefour operates a multi-store strategy, using appropriate format according to location. A new CEO brings critical digital experience. Similarly, France’s Auchan has done better abroad, in other parts of Europe and in Russia. Alibaba just made a major investment in Auchan China.

To fortify its efforts to compete with Amazon, Target plans to acquire Shipt, a grocery delivery startup. It also plans a substantial store remodeling program and the addition locations in major cities, including New York and Chicago. Target’s initiatives helped drive strong holiday sales, but the investment strained profits.

Ebay has benefited from investments to improve the brand and differentiate from other e-commerce players with unique inventory. The product range has shifted from functional to more emotional categories like fashion and home and garden, which has appealed more to younger and women shoppers. Ebay serves 170 million customers from 190 countries. The marketplace advertised the brand to build better understanding about the competitive advantage against Amazon. Ebay announced that it would end its relationship with Paypal in 2020 to have full control over the payment experience.

Falabella, Chile’s most valuable brand, benefited from its dominance throughout Latin America, with a total of around 80 department stores, half located in Chile and half in Peru, Argentina, and Colombia. The brand announced plans for a major addition of stores and shopping malls throughout the region. 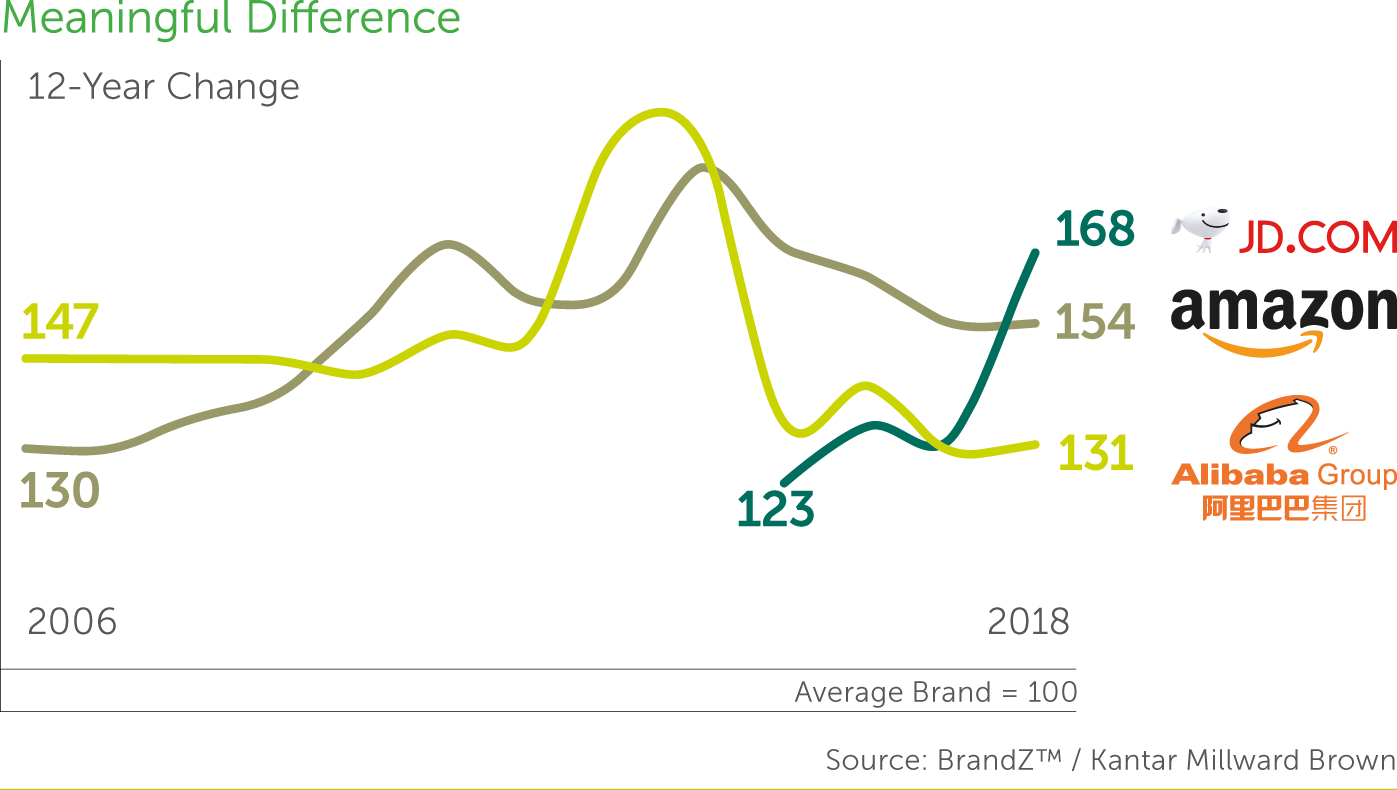