There were nine Japanese brands represented on the BrandZ™ Global 100 in 2006. Today, there are two. In part, this is because of factors outside of Japan’s control – the emergence of American tech companies, for instance, and the continued rise of China and Chinese brands. But it’s also true that Japan is somewhat punching below its weight when it comes to its brand power.

Japan is the third-biggest economy in the world, but ranks sixth among BrandZ™ valuations markets in the total value of its top national brands. This places it behind the U.S. and China, but also behind Germany, France, and the U.K. 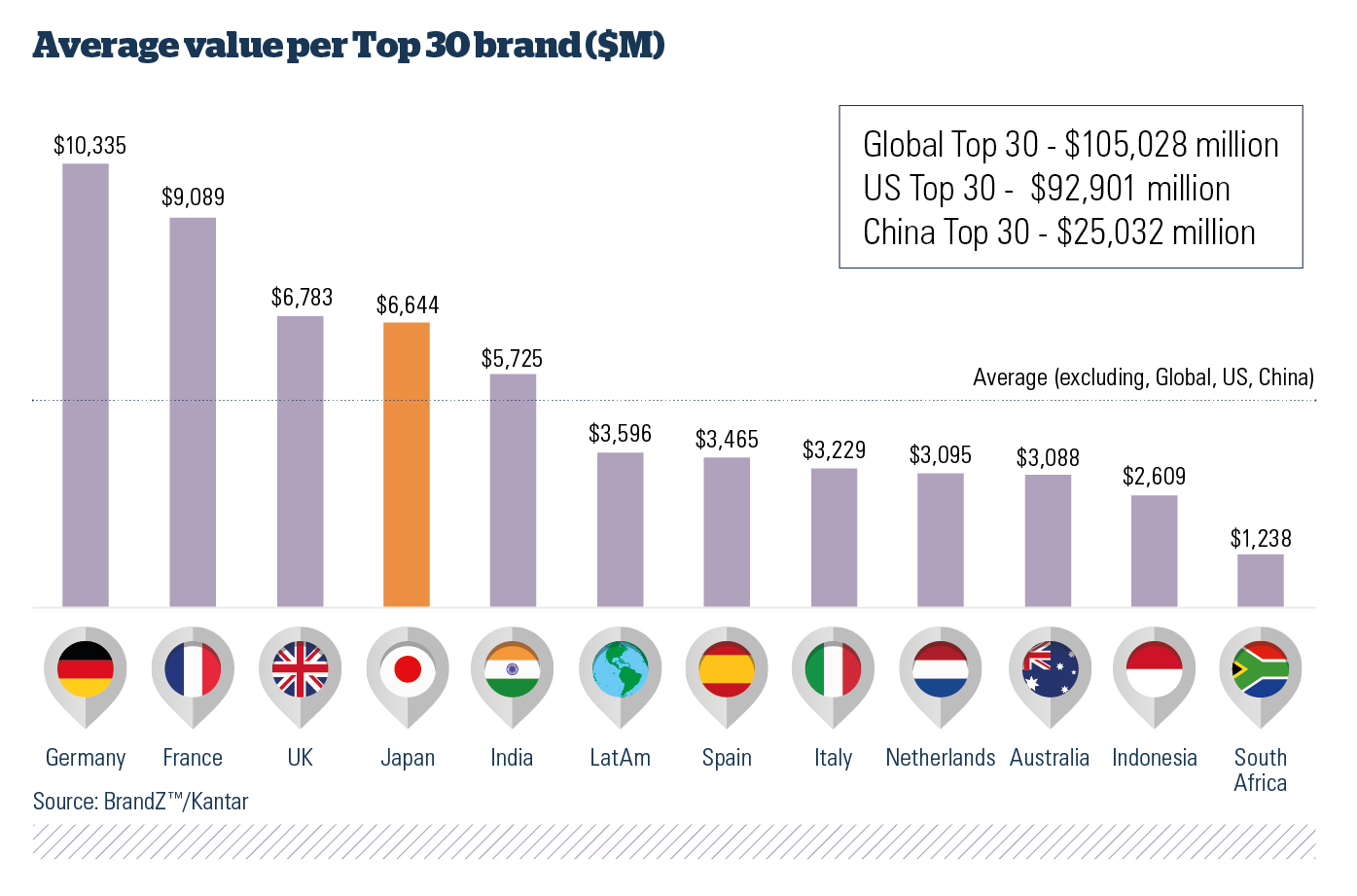 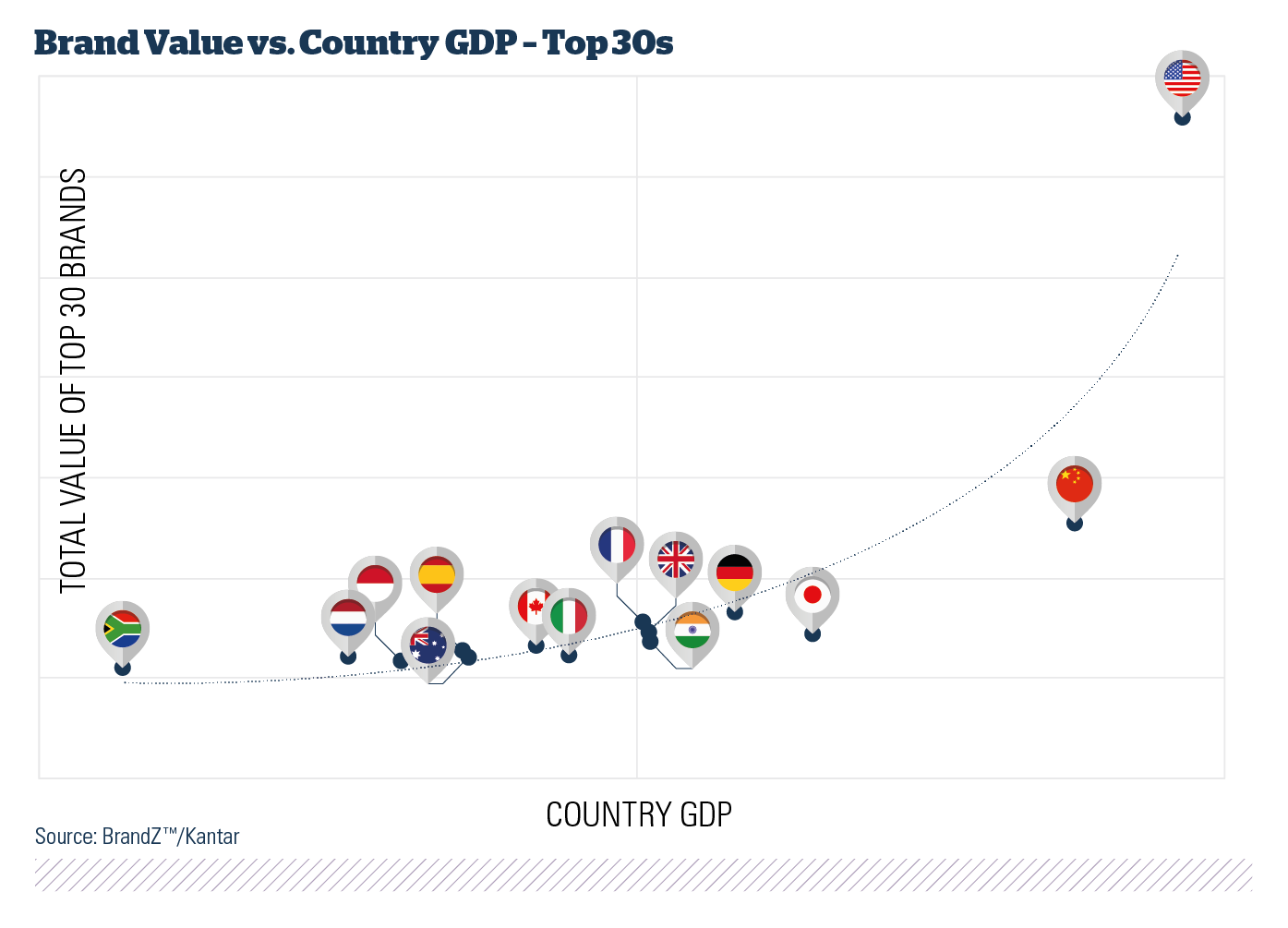 One big reason for this lag in performance is Japanese brands’ relative underexposure on the global stage (measured as a combination of revenue, volumes sold, and profitability from overseas). Contrast this with the higher average overseas exposure of top brands European countries like France, Italy, and Germany - countries with luxury goods makers and high-end automotive brands that perform especially well in foreign markets. 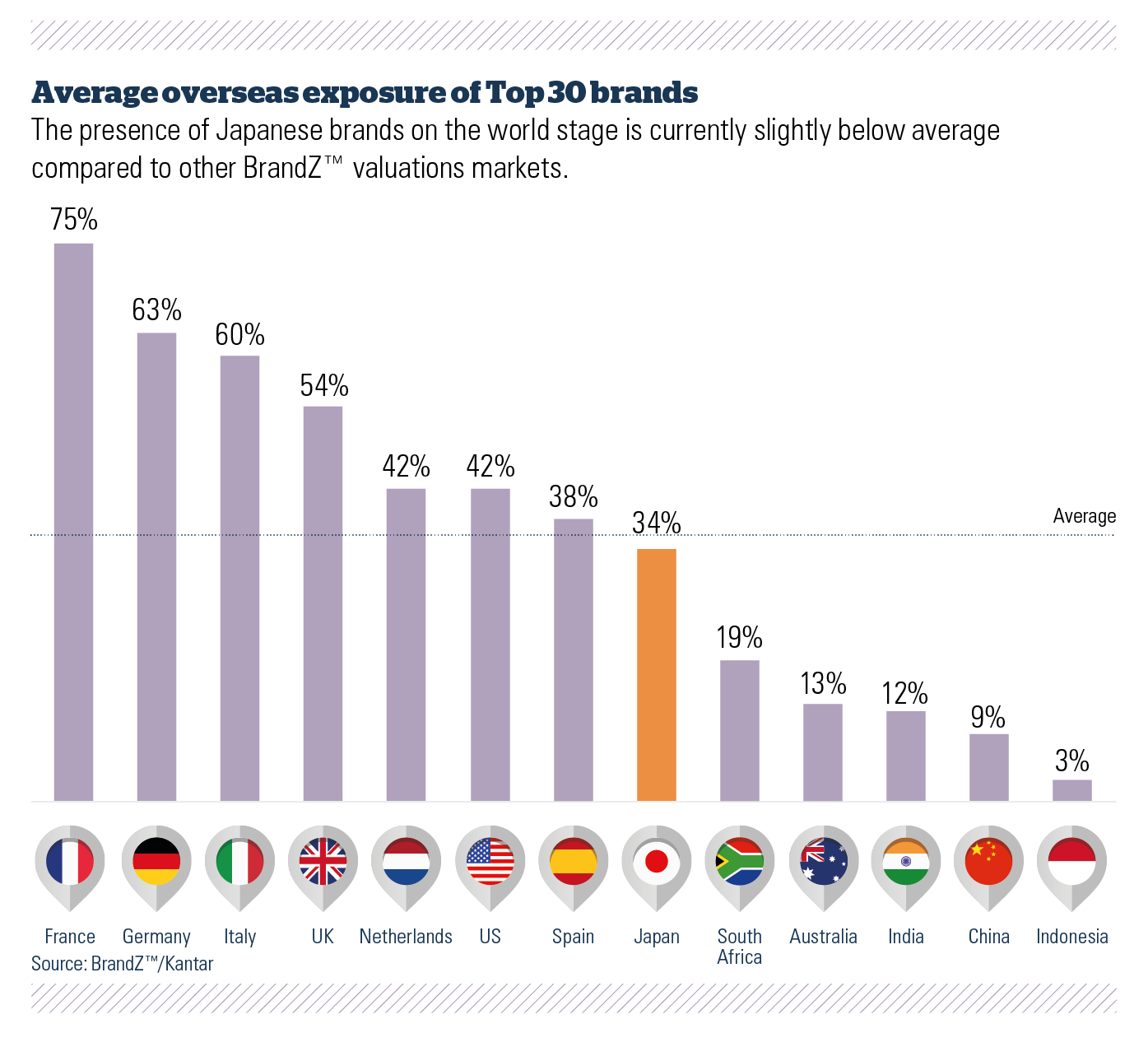 How, then, can Japanese elevate its brands to global stature and dominance?

There are number of commonly expressed theories for why Japanese brands sometimes fail to gain traction abroad. Many boil down to “cultural differences”: essentially, a belief that Japan is a highly idiosyncratic market, which leads Japanese brands to stumble when they assume that works at home will also work abroad. There may be some truth to these theories, but they fail to account for instances when Japanese brands do succeed abroad – often because, of rather than despite, their Japanese values (as in the case of Toyota, the world’s biggest auto brand, and a number of cultural exports ranging from Nintendo to Uniqlo to the country’s anime industry).

BrandZ™ offers a different perspective on the issue of Japanese brands’ performance overseas – one that highlights data-driven, actionable drivers of growth that Japanese brands can use to catch up to their foreign peers. With BrandZ™, brands can pinpoint specific, statistically significant value drivers (attributes like Innovation, Creativity, and Communication) and use these drivers to improve their overall Meaning, Difference, and Salience scores among foreign consumers – which will ultimately result in more business.

Currently, sufficiently detailed global performance data is available for 18 of the Japan Top 50 brands, with more to follow in the coming years. At the high level, what we know today is Japanese brands currently have much weaker equity outside of Japan, and are much less well-known. 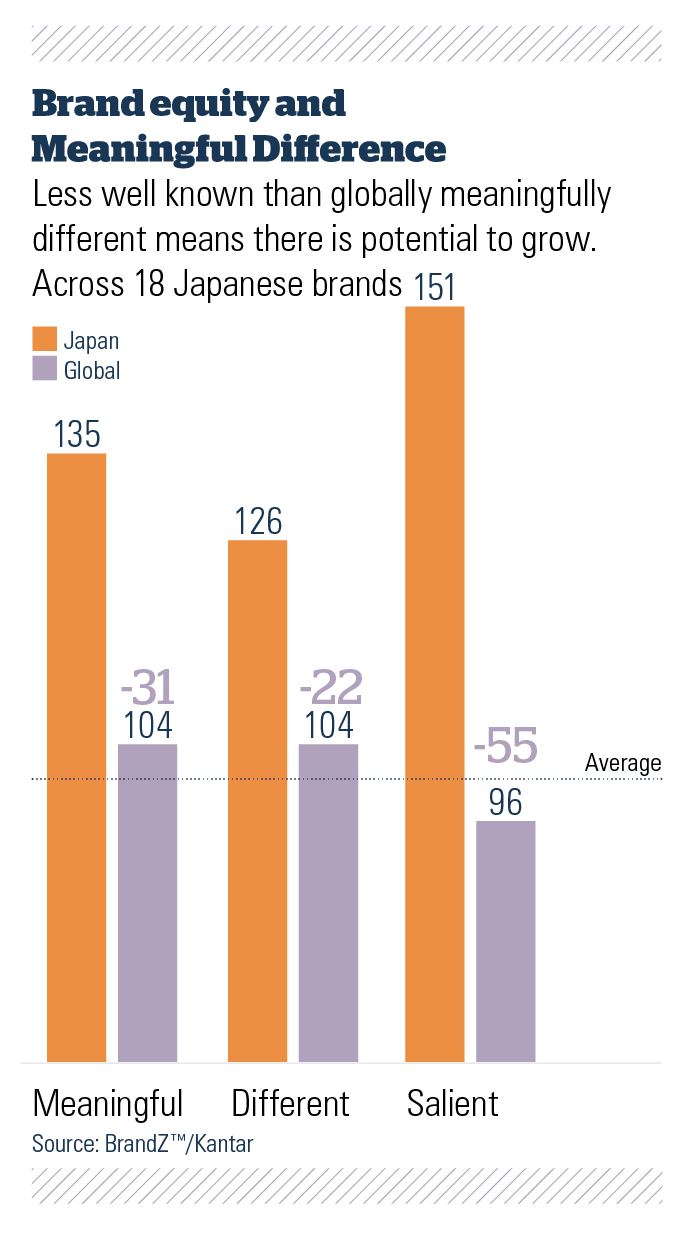 The good news – though it might not seem like it at first – is that Japanese brands are less well known than meaningfully different globally. In other words, Japanese brands take a bigger hit to their Salience scores when they go abroad than they do to Meaningfulness and Difference scores.

Japanese brands’ average scores for Meaningfulness and Difference in foreign markets aren’t massive, but they are above the global average of 100. This suggests that the biggest problem for Japanese brands is simply that they aren’t very well known abroad – rather than a worse scenario in which foreign customers have acquainted themselves well with Japanese brands, and then rejected them as inferior.

When comparing the vQ “vital signs” of Japanese companies’ brand health at home versus abroad, Innovation stands out as the biggest opportunity area for Japanese brands looking to boost their performance in foreign markets. Though all “Vital Signs” component scores outside of Japan are lower than what’s found domestically, the “global gap” is lowest with regards to Japanese brands’ Innovation credentials. An emphasis on Innovation in brands’ marketing communications could fuel value both growth within Japan and abroad. 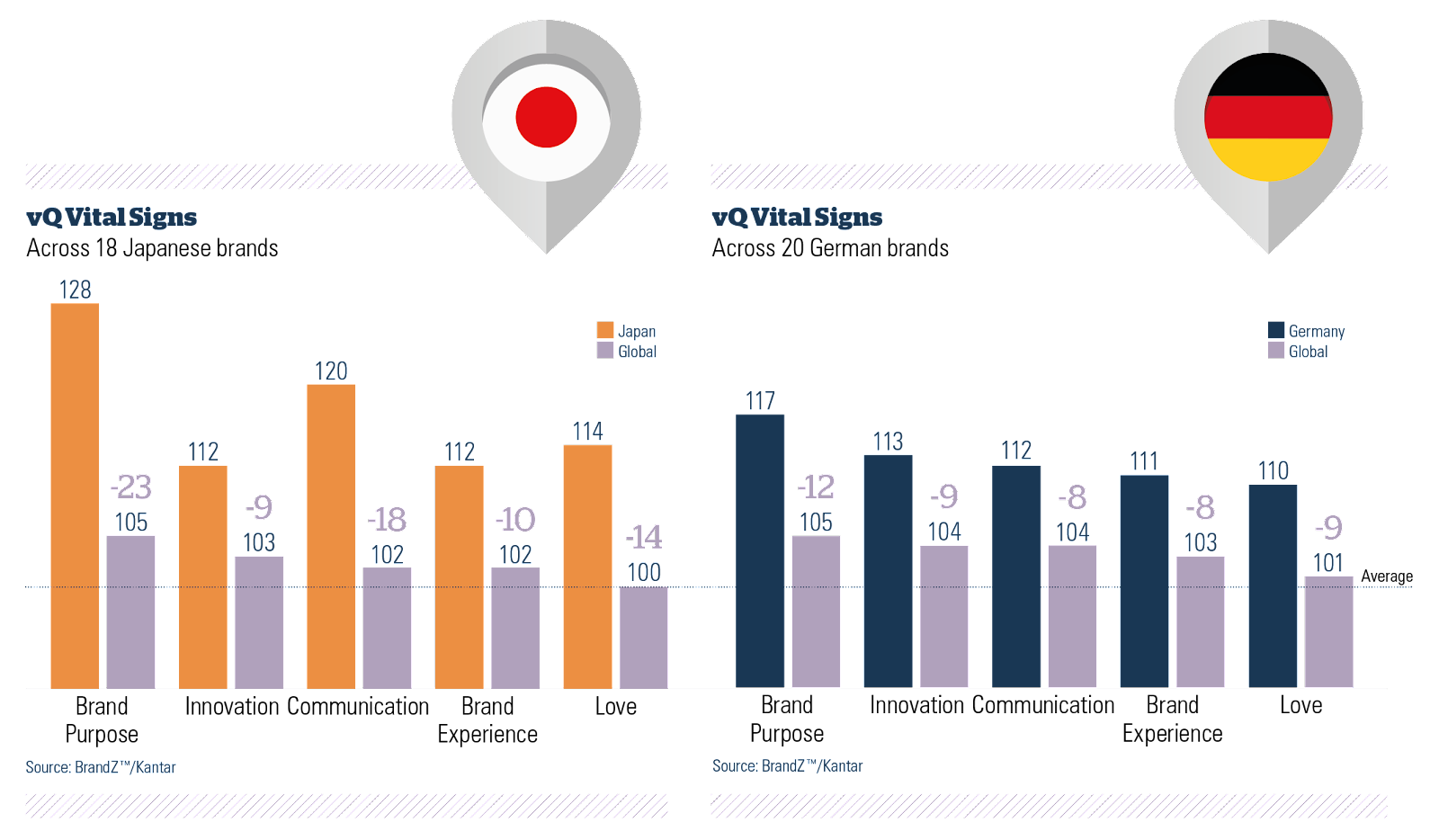 Digging farther into the driver data, we find that Japanese Globally Japanese brands are viewed as more Straightforward, Adventurous, and Different abroad than they are at home – but less Trustworthy and Desirable. The latter facts aren’t necessarily a cause for alarm, as Japanese brands’ Trust and Desire scores abroad are at reasonable, above-average levels. In other words, foreign consumers aren’t outright rejecting Japanese brands as untrustworthy and undesirable, but there is still certainly room for improvement.

Consider, for instance, Japan’s major overseas car brands: Toyota, Nissan, Mazda, Honda, Suzuki, and Subaru. Despite their many successes, in almost all instances they have a lower profile in overseas markets than they do at home – with perceptions of Difference providing the biggest score gap, and therefore greatest area for future improvement. 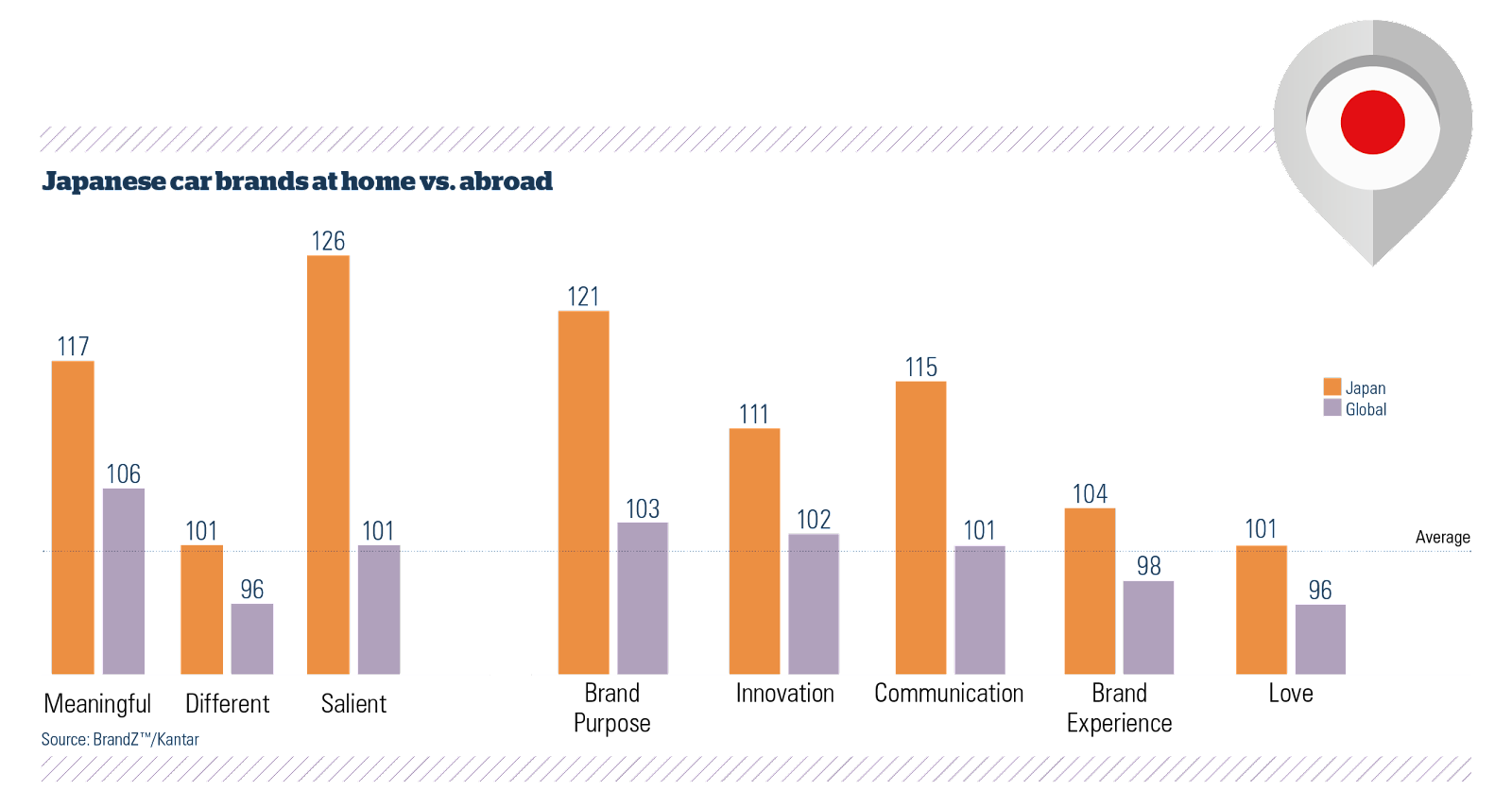 And improvement is possible: brands are by no means destined to lag behind abroad as much as Japanese brands have. Just look at the case of Germany, which the world’s fourth-largest economy to Japan’s third. True, brand equity perceptions for German brands are generally lower outside of Germany. However the gap is much smaller than is seen with Japanese brands. In particular, German cars are seen as almost as Meaningful and equally as Different abroad as they are home. 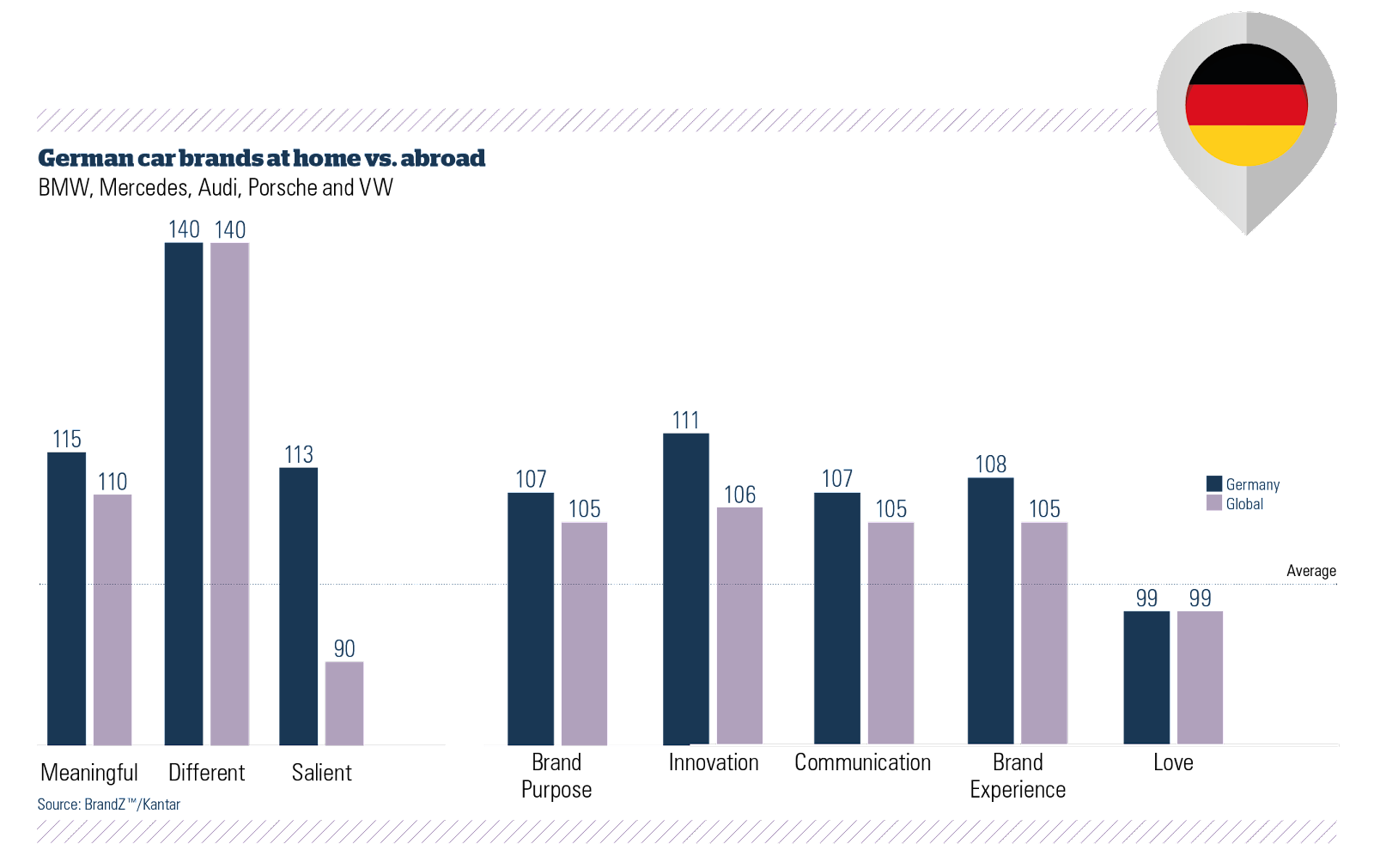 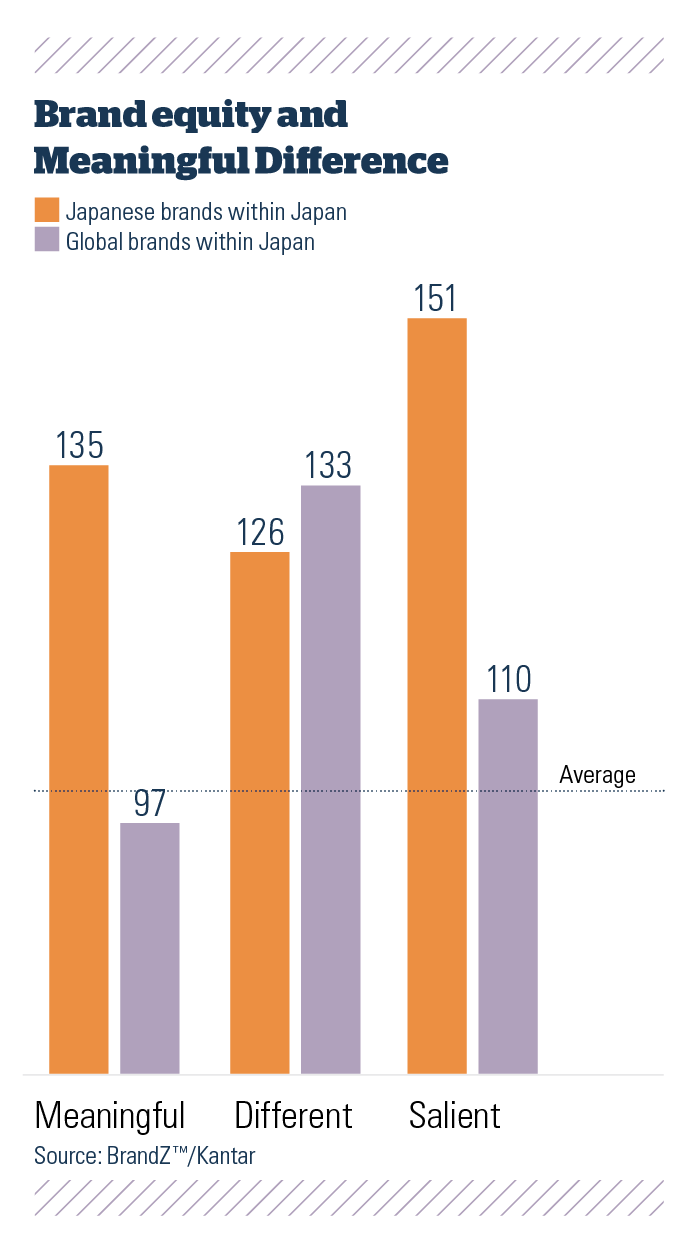 There will always be reputational hurdles to surmount when brands go abroad – look no farther than the Japanese market itself, where Global brands are seen as less Meaningful and less Salient that Japanese brands, as well as less Trustworthy (with an average score of 119 for Japanese brands versus 106 for Global brands).

But “foreignness” also brings opportunities. When marketed correctly and robustly, foreign brands can carry a new and exciting sense of Difference, Innovation, and Uniqueness. This is certainly true in the case of the domestic Japanese market, where global brands outscore Japanese brands on average in these very three categories.

One thing that Japanese brands shouldn’t do is totally change their brand message and marketing strategies on a country by country basis, all in the hopes of chasing a local market’s latest communications fad. Too much localization – to the point that a brand loses its unified global message – can actually harm or obscure a brand’s image. Globalization is still the goal – with localization judiciously appled market by market as an enhancement of a unified brand image, rather than as replacement for that unified brand image.

SPOTLIGHT ON INNOVATION AND LOVE

A NEW CHAPTER FOR JAPAN