There’s no sugar-coating it: 2020 has been a tough year for brands everywhere, particularly in South Africa. The total brand value of this year’s Top 30 fell 20 percent to $26.7 billion. Only South Africa’s most Meaningful brand, Clicks, managed to keep its head above water, growing its value 10 percent. 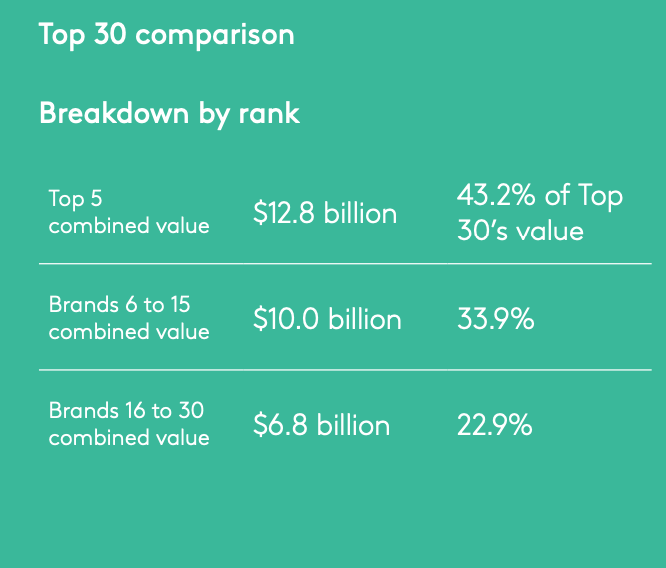 Financial institutions often form the bulk of the top brands in many countries, and South Africa is no exception. But while its banks are big, they are not always beloved. Capitec was the standout, rising 5 rankings to #12, while the category overall dropped a disappointing 24 percent.

Although banks dominate the Top 30, they show a lack of strong equity, and their position is sometimes purely the result of their financial value. But this need not necessarily always be the case. Indonesia, for example, has several banks with excellent Brand Contribution scores, including one that has cracked the top 10 regional banks globally. 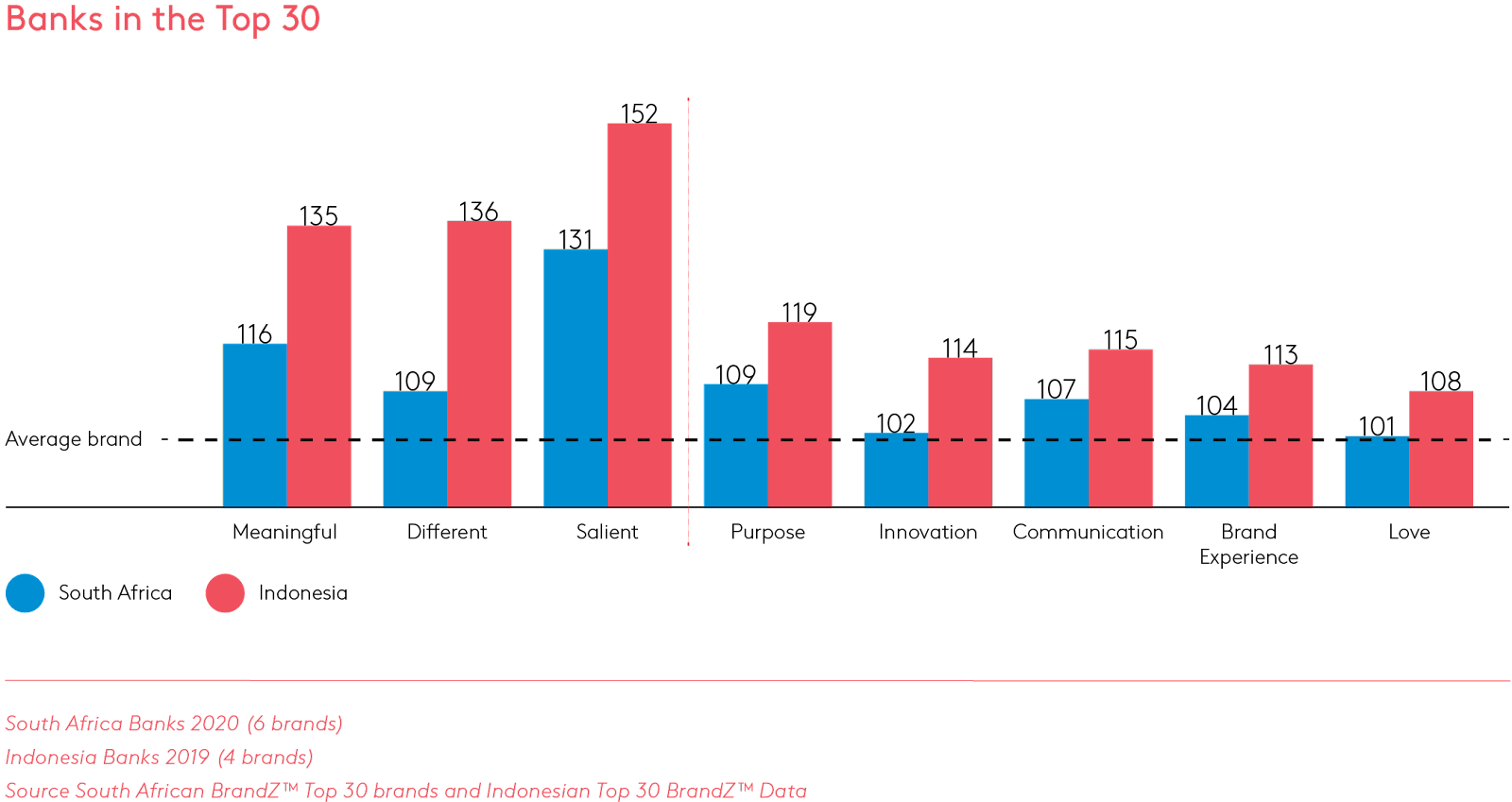 However, two South African banks clearly soar. The new #1 FNB certainly has been making itself known and loved by consumers for its digital innovation, and it has strong brand equity scores across the board. Meanwhile, Capitec scores extremely well for both Meaning and Difference (with FNB not far behind). Among other things, this is the result of its focus on retail customers, which enables it to offer a much-simplified customer experience. And with relatively low Salience or presence in customers’ minds, it has clear avenues for growth through advertising.

Contrary to popular opinion, South African data rates are not stratospheric when compared to the rest of the world. A recent report found that the country ranks 148th out of 228 countries on the price of mobile bandwidth. That puts it in the same territory as Japan or Germany, and better than Canada and the United States. However, all comparisons are local, and South Africans pay much more for data than consumers in other African countries. Still, the category showed some resilience in the face of economic turmoil, with Vodacom outperforming its rivals in the category.

Beer is a tricky category, because the evaluation period for brands occurred largely before the lockdown and concurrent ban on alcohol sales. Prior to that, beer proved the most resilient category against the recession, falling only 5 percent. The category was also buoyed by the inclusion of fast-rising brand Flying Fish. Hansa, however, which has discontinued advertising, saw a predictable slide; otherwise the category would have gained in value.

Insurance is rarely a beloved category by consumers, and betting markets likely would have imagined a steeper drop for it than is shown in this year’s rankings. There are two factors that are keeping it afloat, one is the inclusion of Hollard in the rankings for the first time. The other is the strong performance of Discovery, which continues to be among the more dynamic of South Africa’s brands.

Retail’s category “slide” is a bit misleading because both of the brands that parted the ranking this year were retailers. In fact, retailers individually did quite well in the ranking, with 5 of the 6 brands either holding the same rank or notching gains. And the only brand that increased its value in the top 30 was Clicks.

Retailers are also among the most loved brands in South Africa, with the entire top 5 for the BrandZ™ metric Love coming from the category. Part of the reason might be that South African consumers believe they are getting a fair price from them. They are seen as more fairly priced than retailers in India and Indonesia, and far outpace other categories by this measure in their home country. Retailers have also been among the most aggressive innovators in 2020, making big improvements in their brand experiences, which may pay them dividends in the coming years. 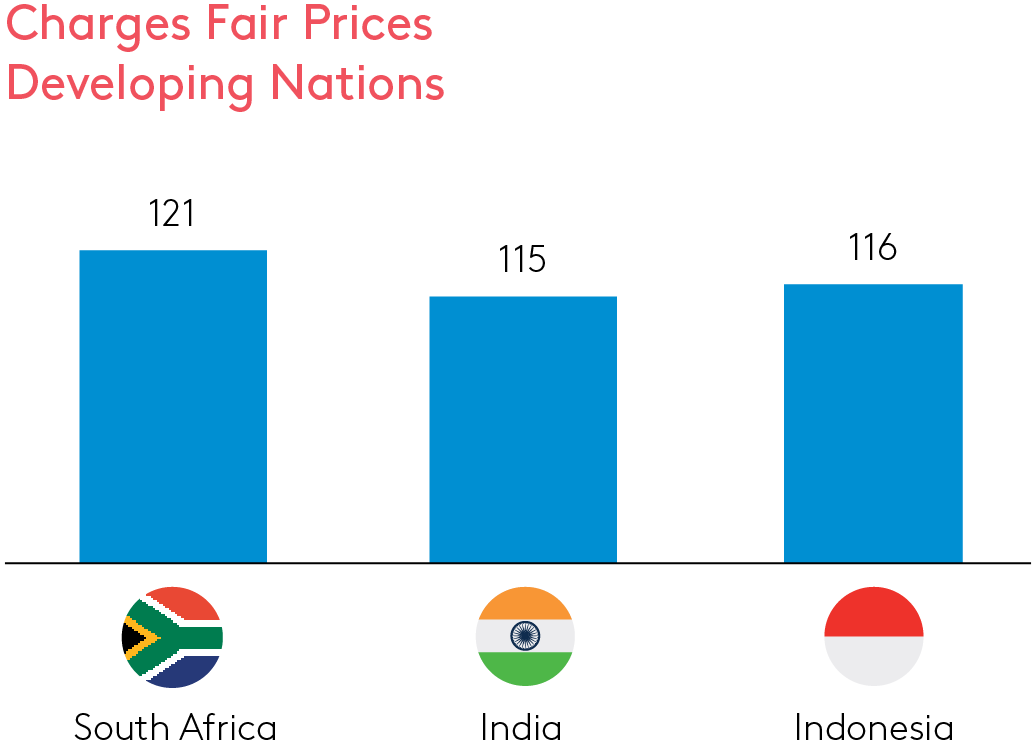 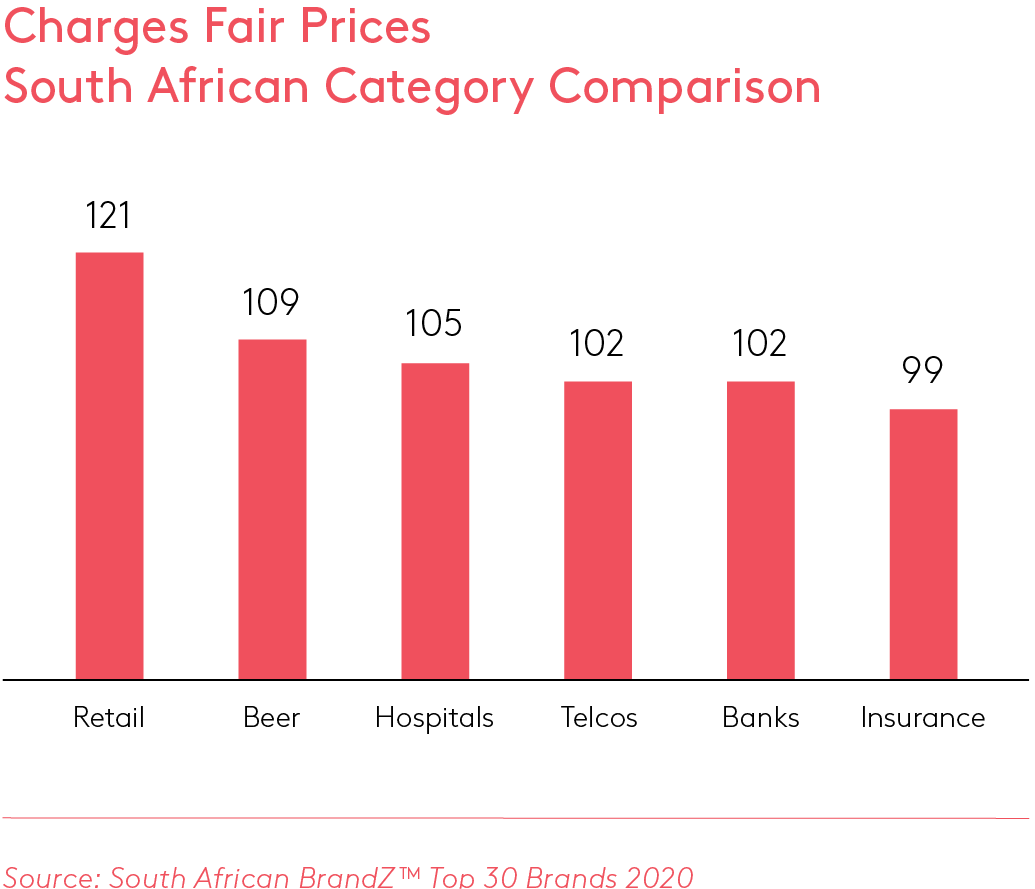 The highlight for the fast food category is that Nando’s finally managed to crack the top 5 this year. Over the past few decades, Nando’s has built itself into one of the world’s most expressive brands. In its home country, its humorous and bitingly satirical advertisements are part of the national conversation, while abroad it has exposed consumers to South African art, music, and culture.

As South Africa’s most Meaningful and loved brand, Clicks delivers on both functional and emotional levels. The brand has followed a strategy of rapid expansion, saturating its home market to roughly 700 stores, making it an ubiquitous and convenient option for shoppers. It is also installed clinics in many of its stores, which positioned it well for the pandemic. And its Clicks Club Card now has a partnership with FNB’s eBucks program, which should make it more top of mind for people.

Finally, Clicks scores well on a metric that should resonate with the country’s stressed consumers: fair prices. This does not mean it sells things cheaply, but that consumers feel they are getting good value from it. All of this has helped Clicks rise 10 percent in brand value and five spots in the rankings. 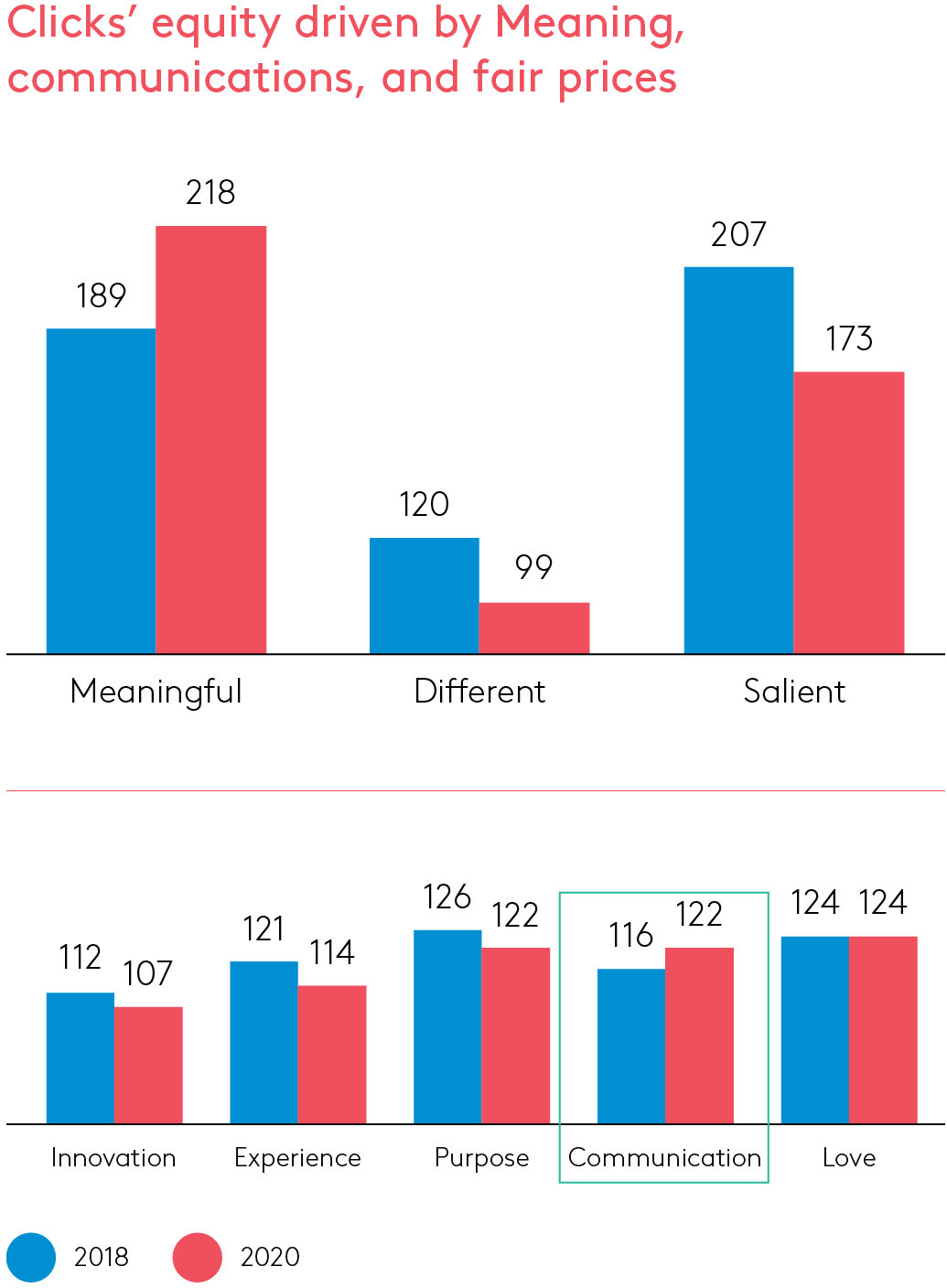 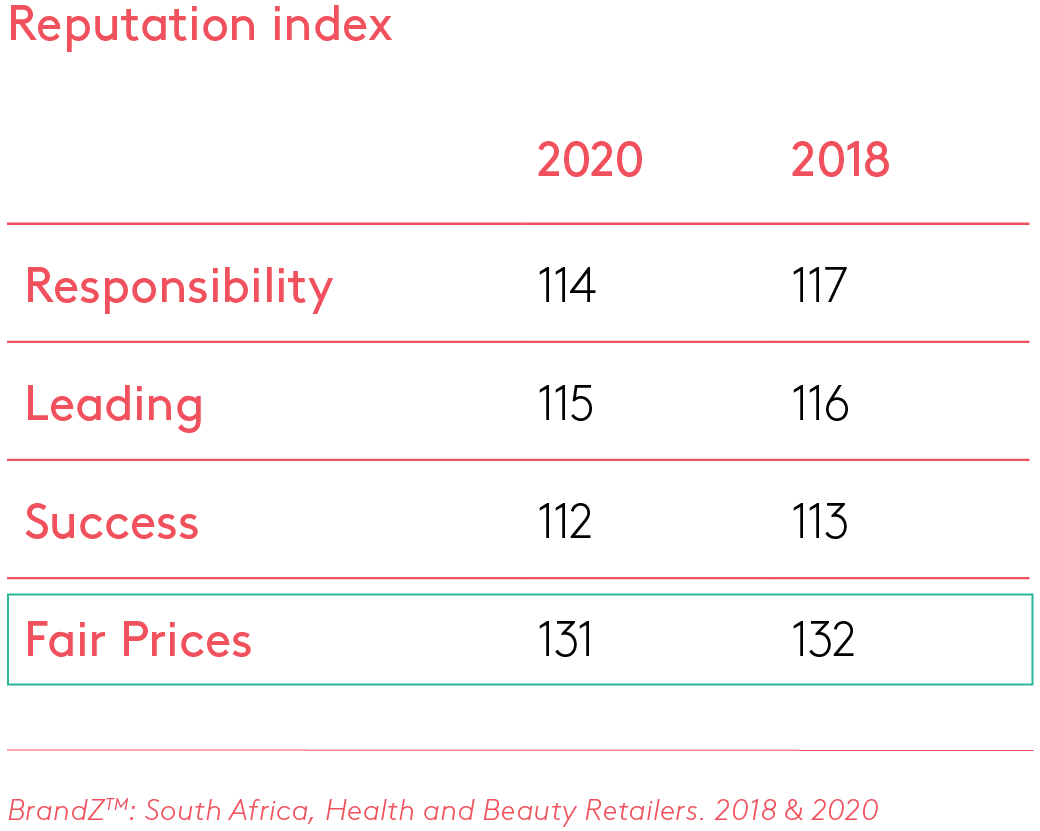