BrandZ is the world's largest brand equity database. Created in 1998 and continually updated. BrandZ is an invaluable resource, containing data on brands gathered from interviews with over 150,000 people every year in up to 400 studies around the world"> brandZ | Report - Indonesia
We’ve stopped what we are doing and creating your personalized BrandZ™ report, which will appear in your inbox soon.

“Muslim awareness” in marketing has grown significantly since 2014. That year marked the coming of age of the Halal cosmetics industry, with Wardah sourcing growth through the Hijab beauty need state. Brands in food, financial services and banking followed, communicating propositions in Syariah finance (compliance with Islamic law), Halal (what is pure) and Riba (what is not just).  Marketers are now selecting a consumer segment - the “Muslim woman” - as an opportunity and need-gap in their marketing plans.

The Rise of Religion in Popular Culture 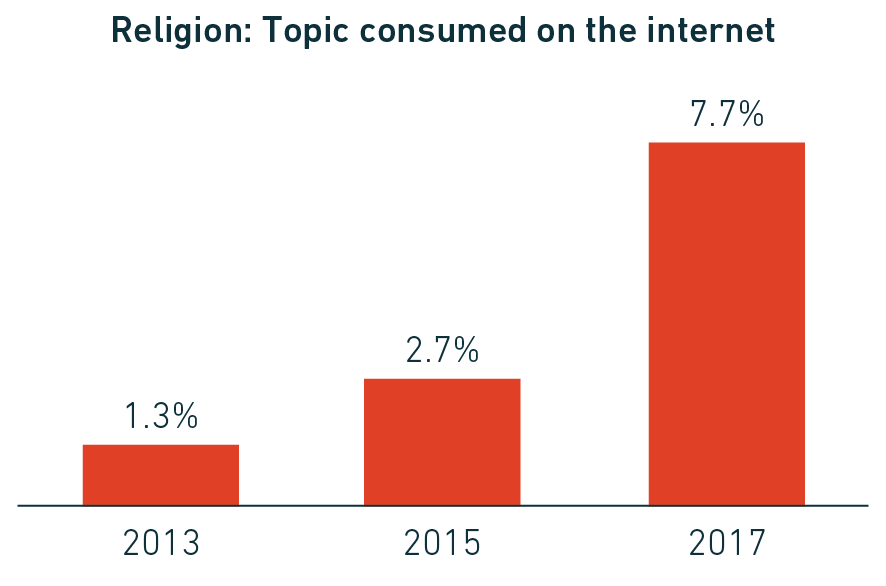 Religion as a topic is being widely discussed. There is an inherent tension and opportunity for marketers here. While the Indonesian consumer is looking for different cultural experiences and influences that will broaden her outlook, she is also holding on to the values and traditions of religion and pious living.

Online search is the starting point to learn about religion and religious practice. While “Islam” as a query has always been popular, other related queries have increased in search volume; terms such as Hijab, Salah, and fasting are generating higher levels of traffic, especially during Ramadan but at other times, too. 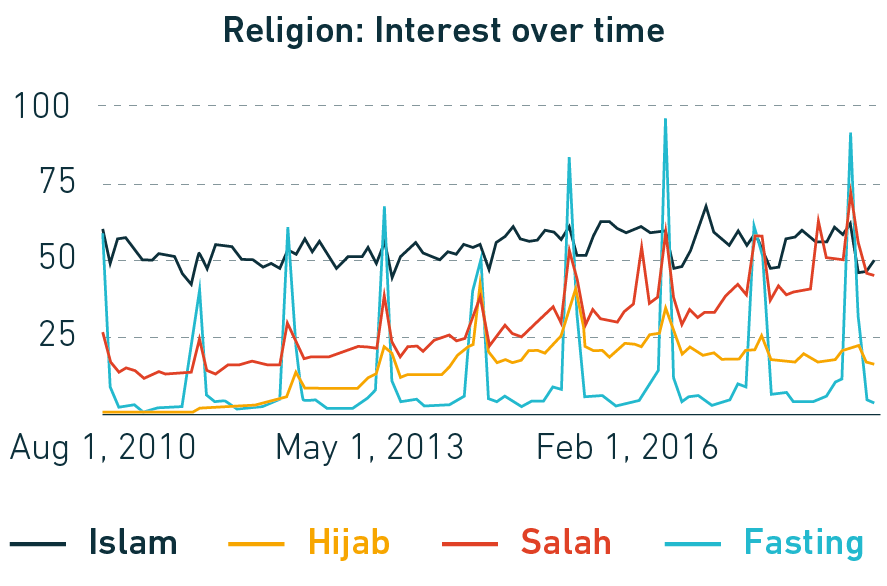 The Jakarta Post recently reported on celebrities showcasing hijrah (repentance) - becoming more religious and repenting for their previous “less Islamic” ways. Peggy Melati Sukma, Teuku Wisnu, Irwansyah and Kartika Putri are among those showing hijrah, which often involves a public declaration to retreat from a worldly life and focus more on religious learning. Social media platforms, especially Instagram, have proven to be successful in promoting such conversions.

In 2014, there was only one religion-based television program among the top 25 programs; in 2018, there were at least six popular shows that were religious in nature. The average rating achieved for religious programming went up by 26 percent between 2017 and 2018. This interest extends beyond Ramadan. Shows like “Damai Indonesia” (Peaceful Indonesia) on tvOne, “Islam itu Indah” (Islam is beautiful) on Trans TV and “Mamah & Aa” on Indosiar are examples of such “pious entertainment”. Beyond pure piety, there is also the rise of softer religious content such as the “Hijab Traveler” on Trans TV, transcending religion to a way of life, and part of popular culture.

Wardah and several insurance companies have been prominent in taking an Islamic stand. Multinationals like Unilever have addressed this with products such as Sunsilk Halal and Hijab Fresh. But it is becoming more important that marketers in all categories to be culturally sensitive to the shift in public sentiment regarding religion.

Here are a three ways brands can adapt to this change:

Advertisers and marketers should appreciate this duality of the new consumer. Those that succeed will be those seeing not just a face with a Hijab but a cultural shift to a new kind of modernity. They will strive to resolve the tension by offering aspiration without diluting traditional values.

A guide to avoiding e-commerce traps

How to reach out to the next pot of gold