The technology category, which includes internet platform, content, and hardware brands, increased 19 percent, following a 16 percent increase a year ago. iQiyi, a streaming video site owned by Baidu, led the category in growth, increasing 64 percent in value, reflecting growing demand for quality video and other content, and excitement generated by iQiyi’s impending IPO.

In his speech to the 19th Party Congress, President Xi Jinping highlighted the importance of technology innovation as China changes the engine of its economy from production to consumption. Government directives, like Internet Plus, along with Chinese entrepreneurship and openness to trying new things, have driven China’s leadership in mobile-centric ecosystems that embrace e-commerce, payment systems, and, increasingly, virtual reality (VR) and artificial intelligence (AI).

Tencent, China’s most valuable brand, continued to innovate and leverage its enormous database, which guides the development of products and services with deep insights into consumer attitudes and behavior. The brand rose 25 percent in value, following successive annual increases of 29 percent and 24 percent.

Tencent increased its stake in Snap, the owner of Snapchat, the messaging service. Snap could potentially benefit from Tencent’s gaming and advertising expertise, and Tencent could expand its presence in North America. Along with JD.com, the e-commerce brand, Tencent invested in VIP.com, an e-commerce brand with special strength in lower tier markets. The deal is intended to strengthen all three brands competitively against Alibaba. Tencent also launched a successful IPO for its e-book subsidiary, China Literature. And Tencent entered a strategic partnership with a major science publisher, Springer Nature, in an initiative to encourage the work of young scientists.

Baidu focused primarily on its search business, with AI initiatives to improve search and the consumer experience on mobile. It entered major AI-focused strategic collaborations with smartphone makers Xiaomi and Huawei. In both instances, Baidu matched its software capabilities with brands whose strengths include hardware and distribution. Huawei, the number three mobile phone producer in the world, after Samsung and Apple, introduced its Mate 10 smartphone. Priced at almost $1,000 the phone is positioned to compete as a premium, even luxury, item—new territory for a Chinese brand.

iQiyi, the streaming video site owned by Baidu, announced plans for an IPO, in 2018. The funds would be used to purchase content and strengthen the brand against its competitors, including Alibaba and Tencent. All Chinese video streaming competitors invested in content to grow their audiences and advertising revenue. Tencent, for example, purchased Game of Thrones and entered a deal with the NBA for live streaming basketball broadcasts. Youku entered an agreement with Alibaba, its corporate parent, to create original content. NetEase, an online video games provider, successfully introduced content outside of China and sought content from abroad to launch in its domestic market.

Sina rose 24 percent in value on the popularity of Sina Weibo, its microblogging site. Telecom communications giant ZTE continued to expand internationally. It derived 42 percent of its revenue overseas. The Lenovo company continued to lead the BrandZ™ Top 100 in the percent of business transacted overseas—72 percent. The company sought more acquisitions following its announced purchase of a stake in Japan’s Fujitsu Client Computing company, a deal that Lenovo expects will increase its market share in Japan. Flat sales of its devices—laptops, tablets, and phones—depressed Lenovo’s brand value. 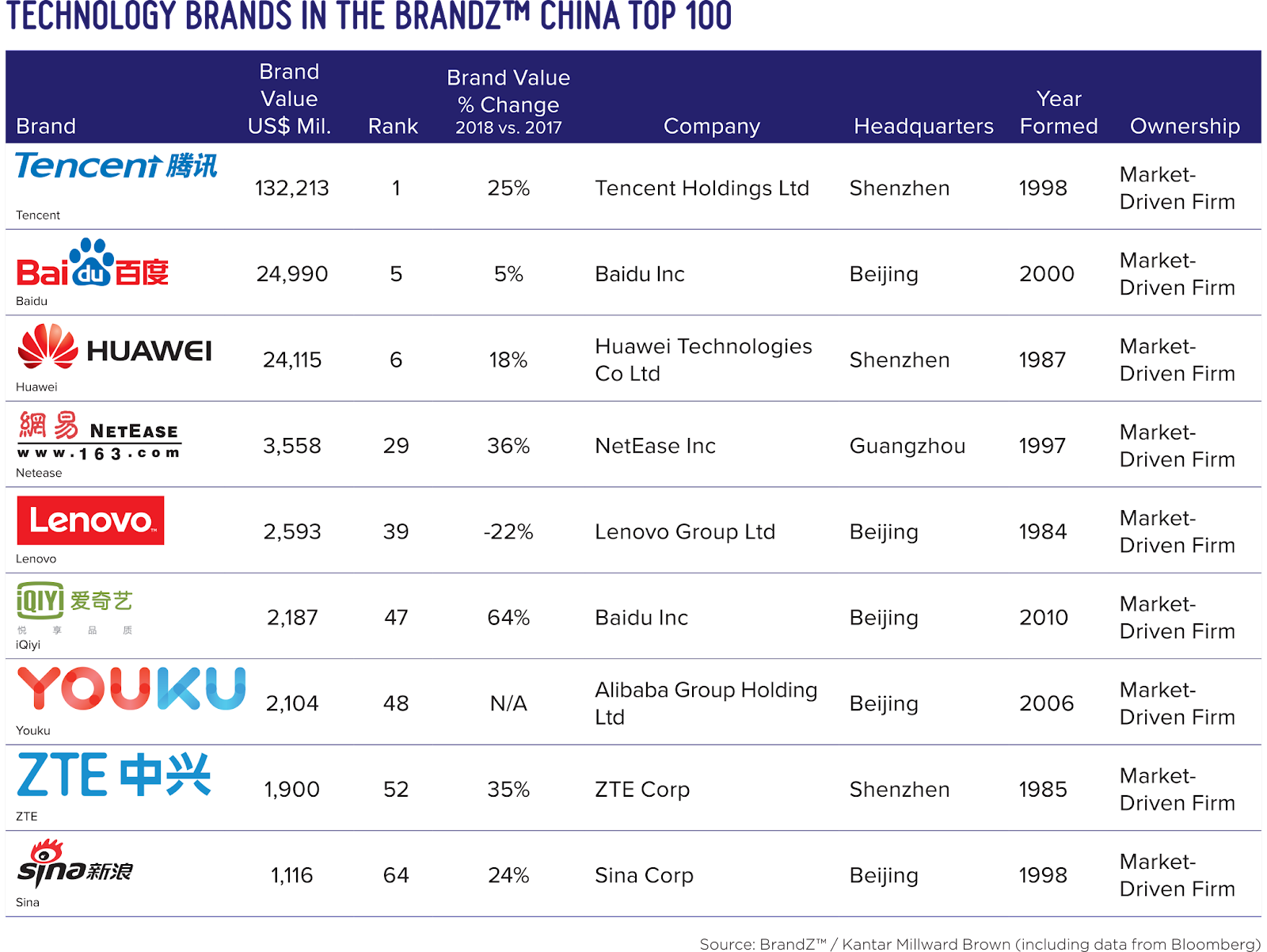