Even before the unexpected assault of COVID-19 around Chinese New Year, the value growth of the technology category, including both internet providers and device makers, was slowing after successive years of uninterrupted gains. Among the growth inhibitors were China’s moderated economic expansion, government regulatory changes, China-US trade tensions, and heightened competition, with five technology brands entering the BrandZ™ China Top 100 for the first time.

The COVID-19 experience exaggerated existing trends. China’s technology category comprises 15 brands that divide into two groups: internet platforms like Tencent and Baidu; and device maker brands like Huawei and Xiaomi. Both groups encountered fierce competition. Internet leaders faced operators that initially competed in a narrow niche like gaming or entertainment, but aspiring to be multifaceted platforms or ecosystems, many nimbly expanded their offerings to grow audience size and revenue, both from e-commerce and advertising. The technology category increased 6 percent in value, following successive increases of 22 percent and 19 percent in prior years.

During the height of the pandemic, some technology brands, including Tencent and Baidu, benefited from an increase in gaming when people were quarantined at home. Cutbacks in advertising budgets impacted revenue, however. The shutdown of retail locations impacted sales of smartphones and other devices, although Huawei was helped by its ecosystem strategy for integrating 5G smart phones with other devices and IoT elements.

Tencent, China’s second most valuable brand, illustrates the category’s competitive dynamics. Advertising sales initially softened during 2019, primarily because of the economic slowdown and trade tensions. Having recovered from government regulations that impacted its gaming business, however, Tencent faced new challenges from increasing competition. In a sign of progress, consumers responded positively to the mobile version of the Call of Duty game when Tencent Holdings Ltd. introduced it late in 2019.

Tencent Holdings Ltd. continued investing in other technology brands with which it collaborates and competes, including Didi Chuxing, (ride hailing app), JD.com (e-commerce), and Meituan (O2O services) and it explored buying a stake in iQiyi, the streaming service in which Baidu owns a majority stake. In conjunction with its 21st anniversary, Tencent Holdings Ltd. announced a revised purpose, advancing technological innovation that improves society, which it expressed in English as “Value for Users, Tech for Good.” Chinese consumers increasingly believe that it is important that brands be committed to improving Chinese society, according to Kantar China MONITOR.

Advertising weakness, exacerbated by reduced media spending during the pandemic, also hurt the results of Baidu Inc., as the search and internet giant continued to make large investments for future growth in new areas, like cloud services. Baidu took out the most AI patents of any Chinese company during 2019. To fund expansion into new businesses, Baidu sold part of its stake in Crip.com, China’s largest travel agency brand, now known as Trip.com.

Baidu also experienced heightened competition in gaming from NetEase, which in an IPO on the Hong Kong exchange raised $2.7 billion in part to fund international expansion, especially in Japan and North America. NetEase established a studio in Montreal to accelerate its overseas growth. It also partnered with Warner Brothers on a Lord of the Rings game.

Another newcomer to the BrandZ™ China

Top 100, Zhihu, a question and answer site compared with Quora, completed a round of investor funding, raising almost $500 million to invest in technology innovations and upgrades. Advertising is the brand’s main revenue source. Tencent Holdings Ltd. is among the its backers. Zhihu partners with Baidu to leverage the search giant’s capabilities.

ZTE, China’s second-largest telecom equipment maker after Huawei, rebounded sharply in brand value after the US government lifted sanctions that had prohibited the brand from buying components from American companies. Subsequently, the US planned to impose restrictions against both ZTE and Huawei. China Mobile selected both Huawei and ZTE to supply the roughly 300,000 5G base stations it plans to install this year.

And despite cybersecurity concerns that limit the presence of Huawei in the US, Huawei advanced overseas, driven in part by strength in Europe, where the telecom provider Telefónica selected Huawei to build its 5G network, although with limitations. Huawei surpassed Apple to become the No. 2 brand, after Samsung, in smartphone shipments. Its Mate 30 smartphone series and the P30 series helped Huawei build its premium business. Huawei introduced its smartphones as central to its ecosystem strategy called 1+8+N, in which the smart phone is the hub of an integrated 5G network of (8) contact points primarily devices, including wearables like watches, and the other IoT elements and networks (N).

in India and other fast-growing markets. However, Huawei’s strength in China impacted the domestic performance of Xiaomi, which also experienced weak advertising sales that affected stock market performance. Going forward, Xiaomi announced the introduction of new 5G phone models during 2020. The consumer shift to the premium end of the smartphone market impacted Meizu, a maker of budget- priced smartphones.

The successful implementation of its diversification strategy drove growth across Lenovo’s several businesses, during 2019. The positive results include Lenovo’s core personal computer business, and its mobile phone business, which developed from its acquisition of Motorola in 2014. Factory shutdowns during the global pandemic impacted its results for the first quarter of 2020, however.

DJI introduced a new compact drone with a camera and other accessories designed for enterprise use by medical teams and other professional operations. UBTECH planned an IPO. The enterprise solutions brand YonYou entered the BrandZ™ China Top 100 for the first time. Among its specialties are Enterprise Resource Planning and Supply Chain Management. The cloud services provider Kingdee also entered the Chinal Top 100, along with BOE, a major provider of screens for smartphones and other devices. 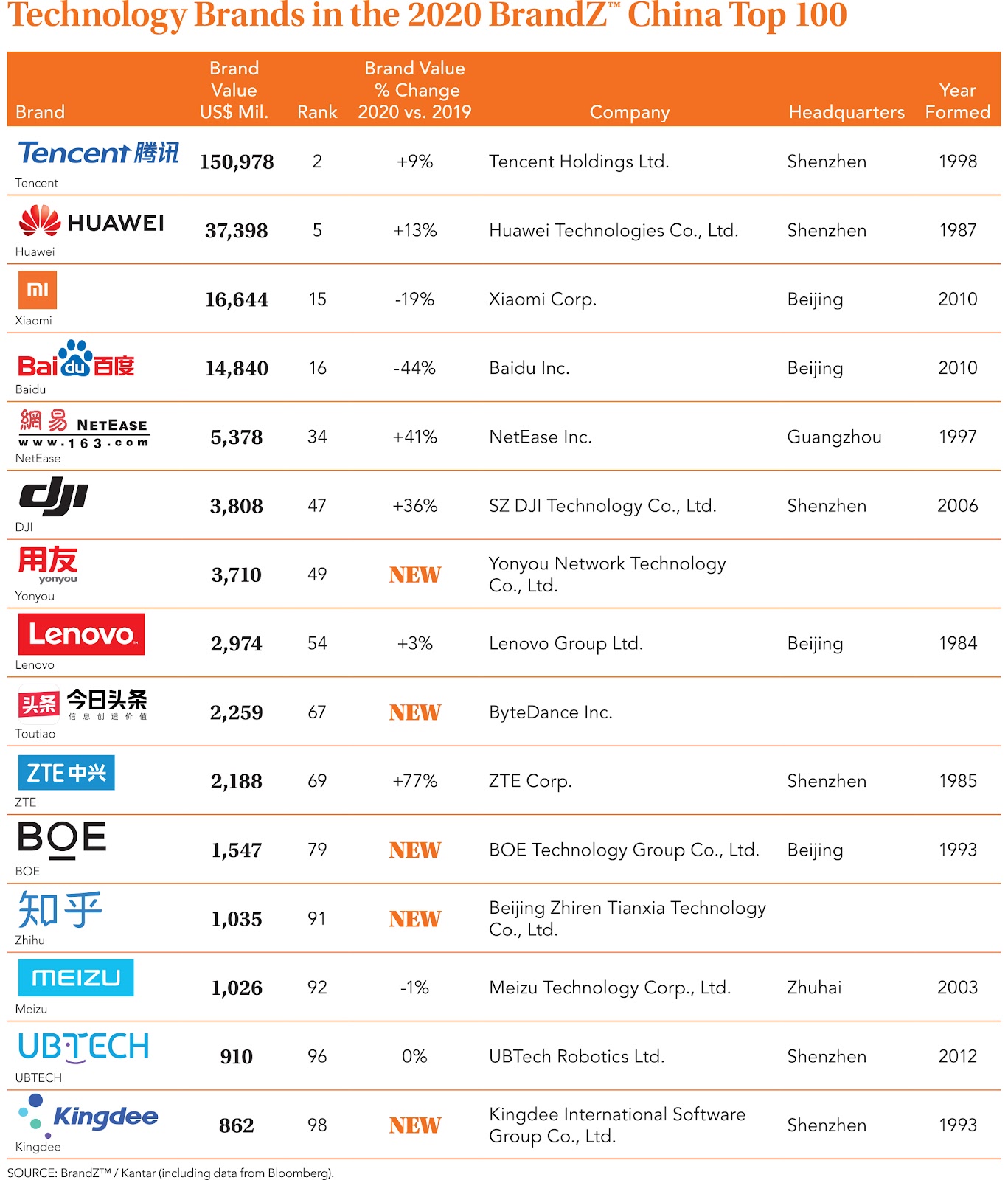