After years of anticipation, two events heralded the impending transformation of a category struggling with commoditization: 5G arrived with the promise of radically faster transmission speed; and AT&T received court approval for its acquisition of Time Warner, definitively moving a telecom provider from being a voice and data pipe to becoming a content provider.

Brands were quick to promote 5G, but slow to explain its actual consumer benefits. While business clients welcomed the possibilities for advancing the Internet of Things, the shape of this transformation, and consumer demand for it, remained vague. In a similar way, the full consequences of AT&T’s transition remained unclear.

Meanwhile, economic fluctuations affected the category. Vodafone, the most global telecom provider brand with operations in almost 50 countries, was most exposed. Vodafone encountered disruptor brands in several of its markets, including India and Italy. The economic volatility in Latin America impacted the results of Spain’s Movistar.

China Mobile, the world’s largest telecom provider, with over 900 million subscribers, felt a profit squeeze when the government directed state-owned telecom providers to cut data costs while also accelerating broadband rollout, including 5G. Amid all this uncertainty, the telecom provider category increased only 1 percent in value, following a 2 percent increase a year ago.

The advent of 5G, and the repositioning of AT&T from utility to entertainment brand, add more uncertainty. With 5G, and the pursuit of leadership in the Internet of Things, telecom providers will encounter technology leaders like Google, as well as home appliance brands. As a content brand, AT&T potentially will face not only Verizon, but also Disney, Netflix, and even Apple with its entry into streaming services.

The competition also includes Sprint and T-Mobile, the Deutsche Telekom brand in North America. These challengers, which have competed on price and the promise of no contract, are waiting for regulatory approval of a merger that would create the third-largest US-based telecom provider, and another powerful 5G operator.

AT&T and Verizon are already rolling out 5G to stake their claim early. They have announced cities across the US that will receive some 5G service during 2019. Both brands list Chicago and Minneapolis among their first markets. These legacy phone companies will also compete with brands like Xfinity and Spectrum, the mobile brands of the two largest US cable companies, Comcast and Charter.

Because of the enormous amount data that telecom provider brands collect, they are potentially well positioned, even as their competitive set expands with the development of 5G and IoT. However, the telecom providers have done relatively little to monetize that data, primarily because their business model does not depend on it.

Unlike technology brands, like Facebook and Google, the telecoms charge for their service rather than provide it for free to attract an audience for paid advertising. Telecoms like Verizon, with its acquisitions of Yahoo and AOL, have taken steps toward building advertising revenue, but the telecom brands face some challenges.

First, the telecom brand heritage in engineering can make it difficult to optimize the opportunity because a siloed organizational structure can inhibit easy communication between engineering and marketing. Second, like the technology brands, the telecoms need to reassure consumers that personal data will be protected.

Until now, the telecoms have avoided much of the censure aimed at the technology brands. But consumers increasingly question the value exchange implicit in sharing their personal information, and wonder if more personalization and convenience is worth the risk of unwanted intrusions and data breaches. The advent of 5G makes the question more urgent.

The speed of 5G can open occasions because it will enable game players on mobile to have the same gaming experience that they enjoy with fiber, with imperceptible latency, the millisecond between making a command and having it implemented. IoT also will create new opportunities. But these are not the only places telecoms are looking for growth.

Orange, the French-based telecom brand, used its technology and the equity of the Orange brand to launch an online bank that competes with fintechs. Orange Bank is expected to expand to Spain during 2019. Like some other telecom brands, including Spain’s Telefónica, Orange also invests in tech start-ups, like those advancing women’s entrepreneurship, which helps burnish the brand’s credentials as an innovator and social activist.

Although the larger telecoms sometimes struggled to differentiate, some of the smaller brands established a clear proposition and found niche audiences the way craft beers attracted a core group of followers. GiffGaff, a UK-based MVNO (mobile virtual network operator) run by Telefónica, added a financial services app aimed at its core Millennial customer base. VOXI, a Vodafone brand aimed at young people, does not charge for downloading or uploading popular social media apps like Facebook and Snapchat.

Meanwhile, industry consolidation continued. In Europe, UK-based Vodafone waited for EU approval of its bid to take over the cable networks owned by Liberty Global in Germany and Eastern Europe. The French brand Illiad entered Italy with a promotional pricing strategy similar to the one used by India’s Jio, which precipitated the merger of Vodafone and Idea Cellular and the sale of Tata’s telecom business to Bharti Airtel. In the US, regulators contemplated the merger of T-mobile and Sprint.

AT&T, the No. 1 ranked brand in the BrandZ™ telecom providers category, has been losing salience as new entrants to the widening category of communication take share of voice. However, the established position of AT&T means the brand is relatively more Meaningful than these newcomers.

AT&T’s personality and corporate reputation show two sides of its customer experience. Customer experience will be vital to AT&Ts success as it transforms from a telecom provider into a communications and entertainment ecosystem.

Telecom provider brands communicate about being the best. And they may be best in some things—being the largest network, for example. But no brand is the best in everything. Even as telecom providers move from 3G to 4G and now to 5G some of the same pain points remain and disappoint customers. Brands need to get it right and fulfill the promise.

This notion seems basic, but relative to the abundant data they collect, and compared with other categories, telecom providers have opportunities to delight customers, anticipate and eliminate problems—and build loyalty. The data also enables telecoms to understand which customers have been most loyal or valuable and deserve rewarding in some way.

Other than presenting consumers with just one bill, most telecom provider brands have not done a good job of explaining the benefits of having a converged offering, where one brand provides a range of services—such as mobile, internet, and TV.

With tremendous opportunity in 5G, and the potential of the Internet of Things, create a clear customer proposition that explains the benefits of this technology to the consumer. The proposition could be broad but should focus on the benefits for specific audiences. 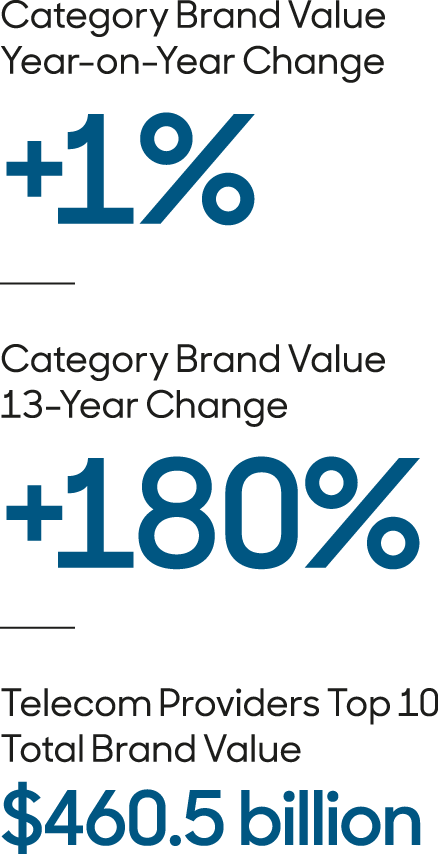 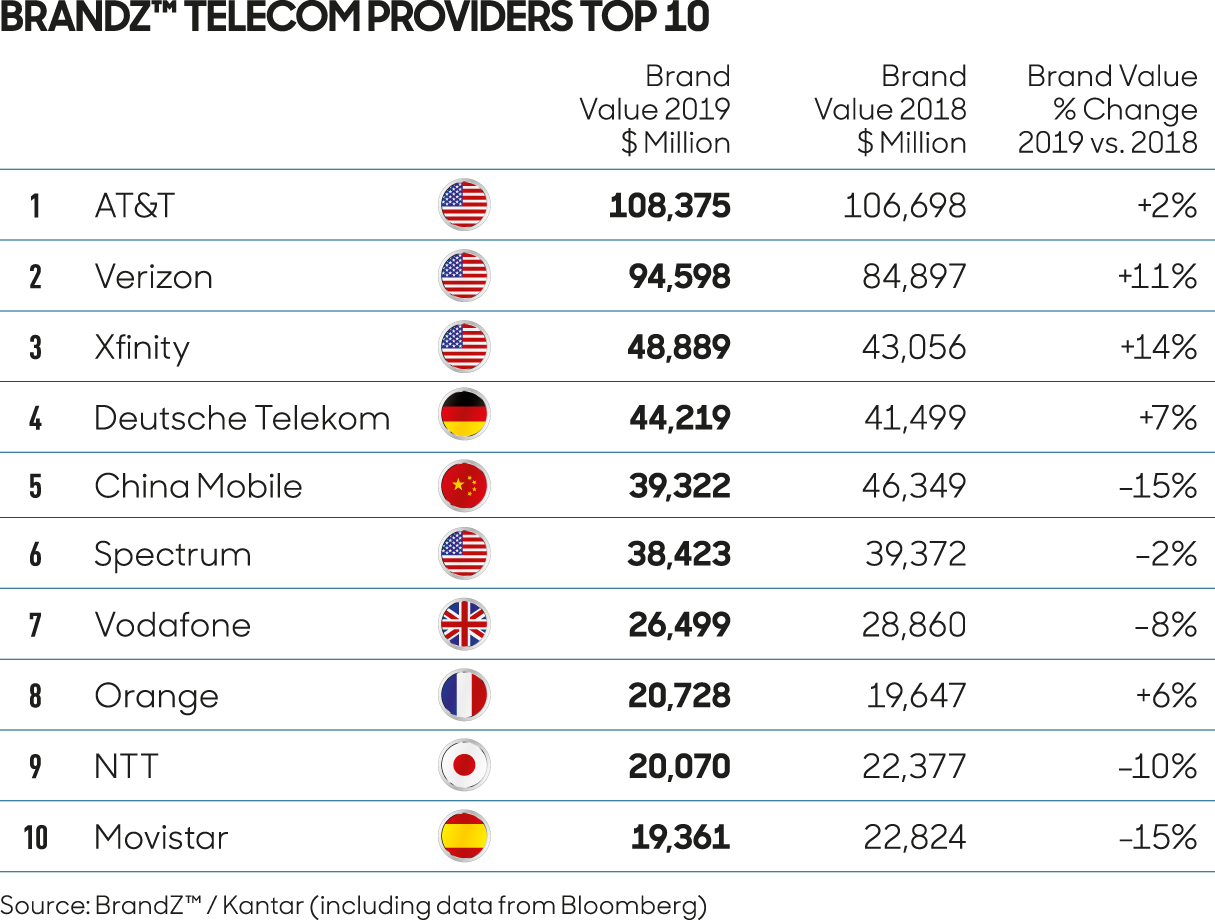