In a year when Alexa became a household name, the category that invented electronic voice transmission over a century ago continued its transformational shift to data and content. And it competed with technology brands for leadership in digital connectivity. Slowing mobile growth and narrowing margins affected results, however, and the telecom provider category increased 2 percent in value, outperforming only the oil and gas category in the BrandZ™ Global Top 100.

The most valuable brands continued to think beyond the category. AT&T attempted to acquire media giant Time Warner, which would provide a vast library of content for the DirecTV streaming service it purchased a few years ago. The US government blocked the acquisition, however, arguing that the combined company could potentially be monopolistic. AT&T appealed the decision and underscored its commitment to transforming into an entertainment company by relocating its entertainment division to Los Angeles, from the East Coast.

Other telecom brands also are attempting to become entertainment hubs. Comcast launched its Xfinity mobile service bundling with TV and internet. Using voice search it was possible to search across YouTube and Netflix. The brand is aggregating services and adding simplicity. Vodafone, the UK-based telecom with operations in 26 countries, explored combining with Liberty Global, a giant UK-based TV and broadband entertainment company present across Europe and beyond. 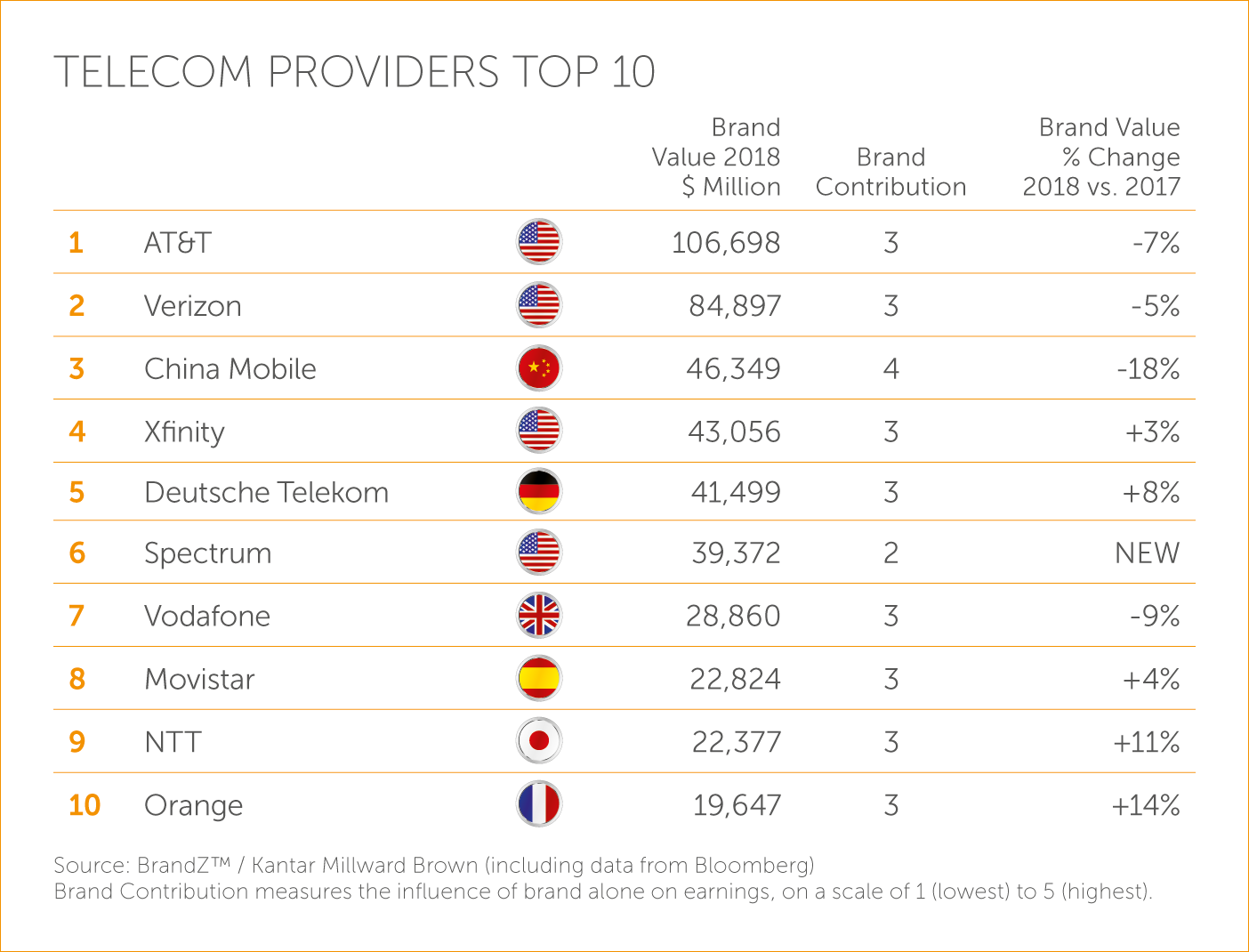 Japan’s NTT prepared for 5G expansion in anticipation of the 2020 Olympic Games in Tokyo.

Entertainment and content were not the only spaces telecoms entered as they reimagined the category. France’s Orange, for example, launched Orange Bank in France, an effort to disrupt banking and leverage Orange’s customer base and its knowledge of online banking gained from its Orange Money operations in Africa and the Middle East.

Verizon launched a new campaign that stretches the brand beyond being a voice and data conduit, and even a content provider, to becoming a brand at the intersection of human need and connectivity, with products that focus on Smart Cities and the Internet of Things. In a project aimed at controlling traffic congestion and pollution, Verizon is embedding sensors on roads around Sacramento, California. Verizon plans to launch 5G in Sacramento in 2018.

Moving from being an engineering-driven telecom company focused on designing and building reliable infrastructure to a content-driven platform brand dependent on artistic creativity requires a cultural leap, as the competitive set widens to include not only other telecoms, but Apple, Google, Amazon, and other technology and content providers.

In its largest ad campaign ever, Vodafone launched a theme called, “The future is exciting. Ready?” The campaign acknowledges that the telecom provider category is rapidly transforming, and it positions Vodafone as optimistic about a future being shaped by new technologies and helpful in helping consumers understand and use them.

Verizon introduced Verizon Up, a loyalty program that rewards spending, but requires users to share personal data, which helps target advertising. Verizon intends to build a strong advertising business by combining its technology and customer data strengths with the expertise of Aol and Yahoo, which it acquired and recently merged into a brand called Oath.

Ironically, while retailers and banks are shutting locations, T-Mobile added 2,800 stores (including MetroPCS, its prepaid brand), ending 2017 with around 5,400 stores, including 500 places where the telecom provider had no previous presence, enabling T-Mobile to reach new customers and leverage the cost of its national media investment.

Although people consumed a lot of content, over-the-top (OTT) streaming services competed with telecom providers for market share. The main challenge was not that customers were cutting the cord, rather they were “cable shaving,” rejecting bundles to pay only for the channels they usually watch.  In an effort add new subscribers, AT&T bundled a DirecTV Now, the streaming service of its DirecTV subsidiary, with phone, TV, and internet. Verizon introduced unlimited data plans to stabilize its customer count.

With a strong performance by its T-Mobile business in the US, Deutsche Telekom, Europe’s largest telecom provider, increased revenue and profit even as it invested in preparations for 5G. France’s Orange increased in revenue for the first time in several years. Orange expanded the number of contract customers and increased income from increased data usage driven in part by online newspaper and magazine subscriptions combined under an offering called ePress. Driven by Spain’s recovering economy, Movistar added more high-spending customers with offerings of more data and faster speed.

Many of the telecom provider brands, including AT&T, Verizon, and Deutsche Telekom, planned to prepare their networks for 5G and even introduce their first 5G offerings in limited markets. The advance to 5G is expected to facilitate new technologies and increase the transmission of data with the growth of the connected devices, including smart homes and autonomous vehicles. Verizon tested 5G in 11 US markets. AT&T planned to trial 5G in Texas.

Indian government digital priorities helped facilitate the rise of Reliance Jio, which disrupted competition in the second largest telecommunications market after China. Low pricing enticed subscribers to join Jio, and triggered a period of consolidation, including the merger of Vodafone and Idea Cellular, and the sale of Tata’s telecom business to Bharti Airtel. Meanwhile, Jio reported its first quarterly profit since its launch in September 2016.

In the US, the Trump administration reversed net neutrality regulations promulgated by the Obama administration. The revised rules, which allow telecom providers to transmit data at varying speeds, opened the possibility that the telecoms would allocate bandwidth unevenly, favoring certain major customers at the expense of individual consumers. The telecom providers generally supported the new rules, while assuring consumers that service levels would remain unchanged. 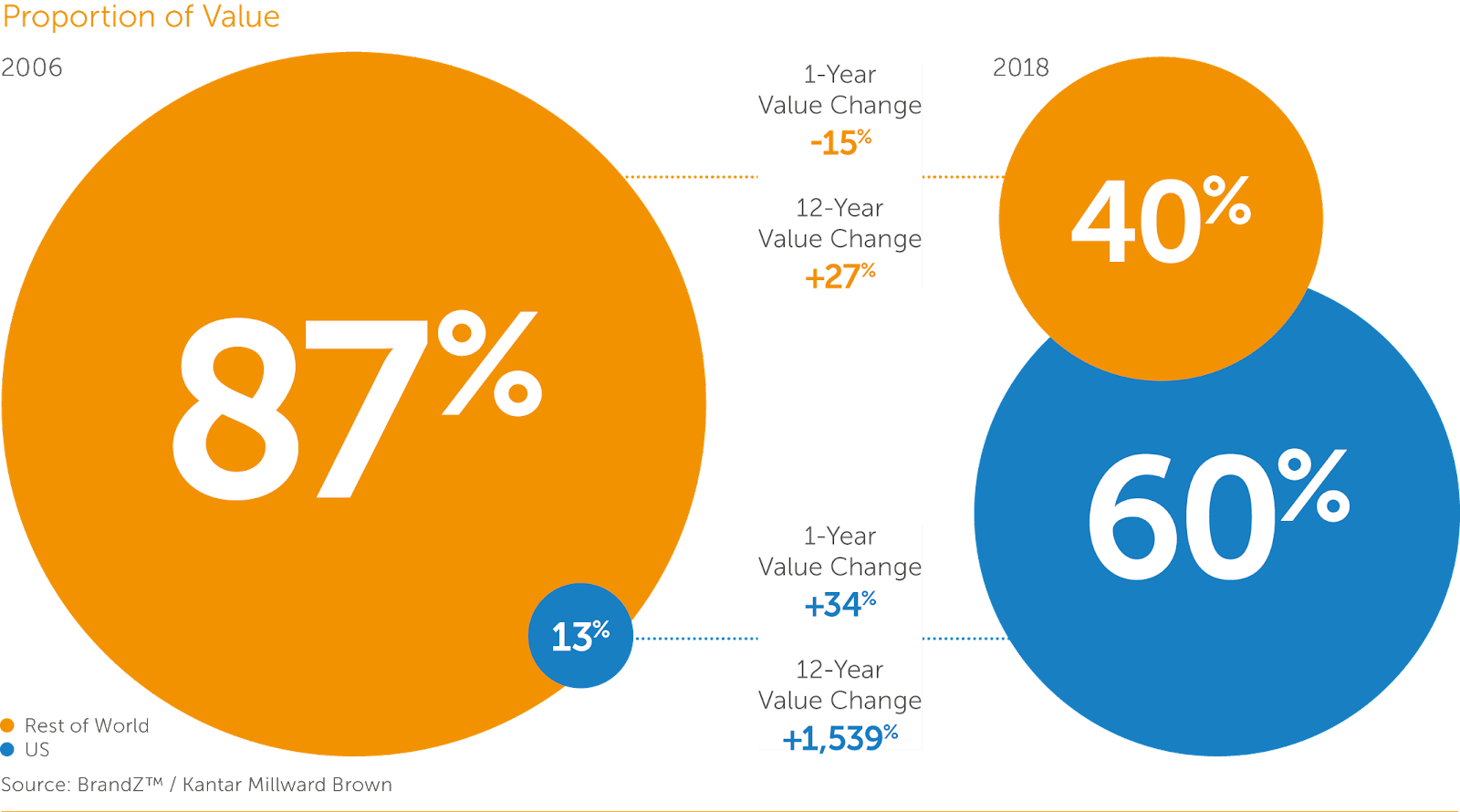 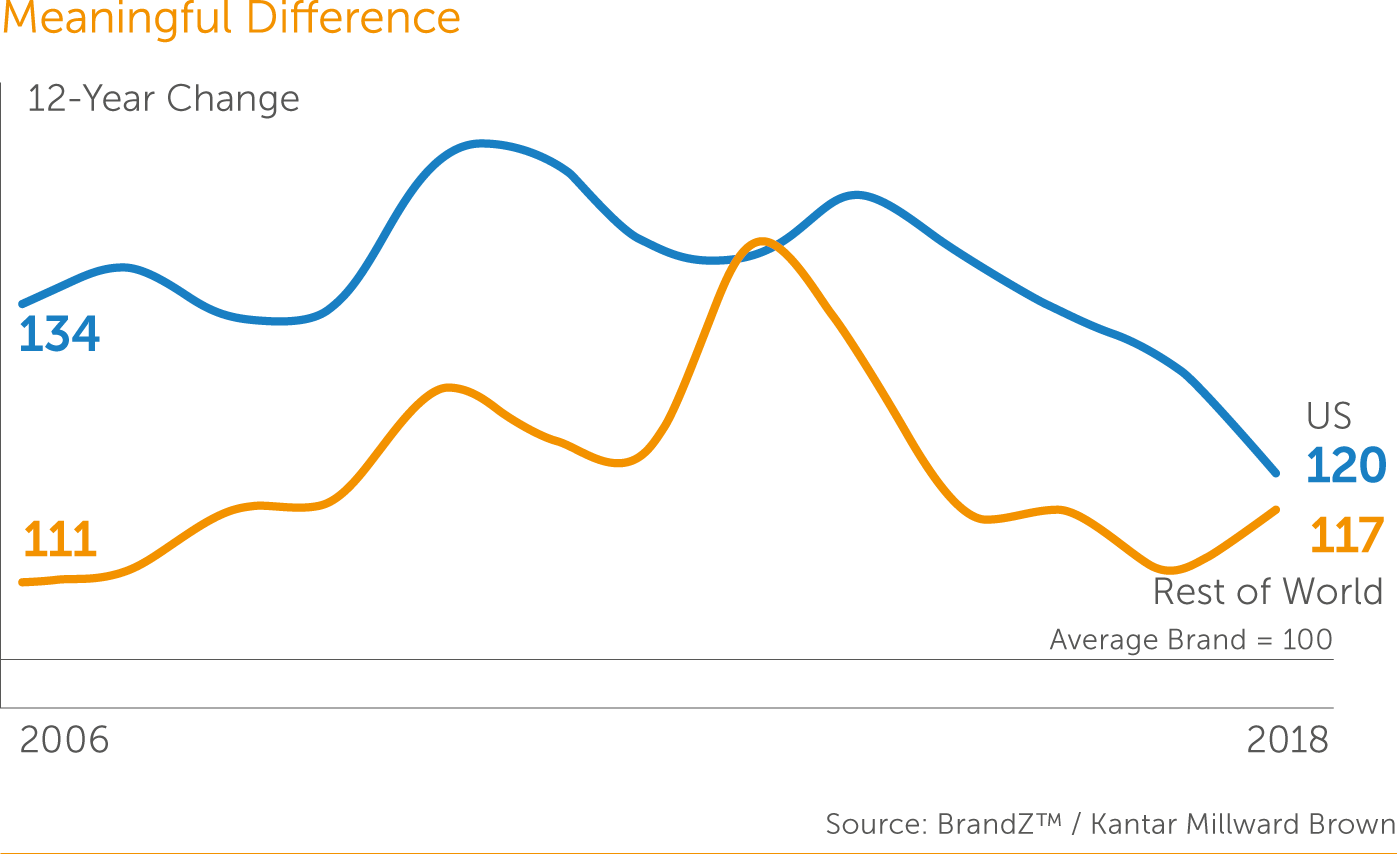