Having spent years struggling to differentiate their brands, Covid-19 suddenly validated telecom providers as essential to keeping the world connected, even when economies shut down and people quarantine at home. The closure of physical stores slowed device sales and subscriber growth, however, and the telecom provider category declined 4 percent in value following a 1 percent increase a year ago.

Telecom providers aggressively pursued the rollout of 5G, but less successfully explained the benefits of 5G for consumers. They built scale, services, and content, and expand into other categories, specifically entertainment. Meanwhile, category consolidation continued. After years of regulatory and judicial review, the merger of Sprint and T-mobile, owned by Deutsche Telekom, eliminated the AT&T-Verizon duopoly that had dominated the US telecom market. 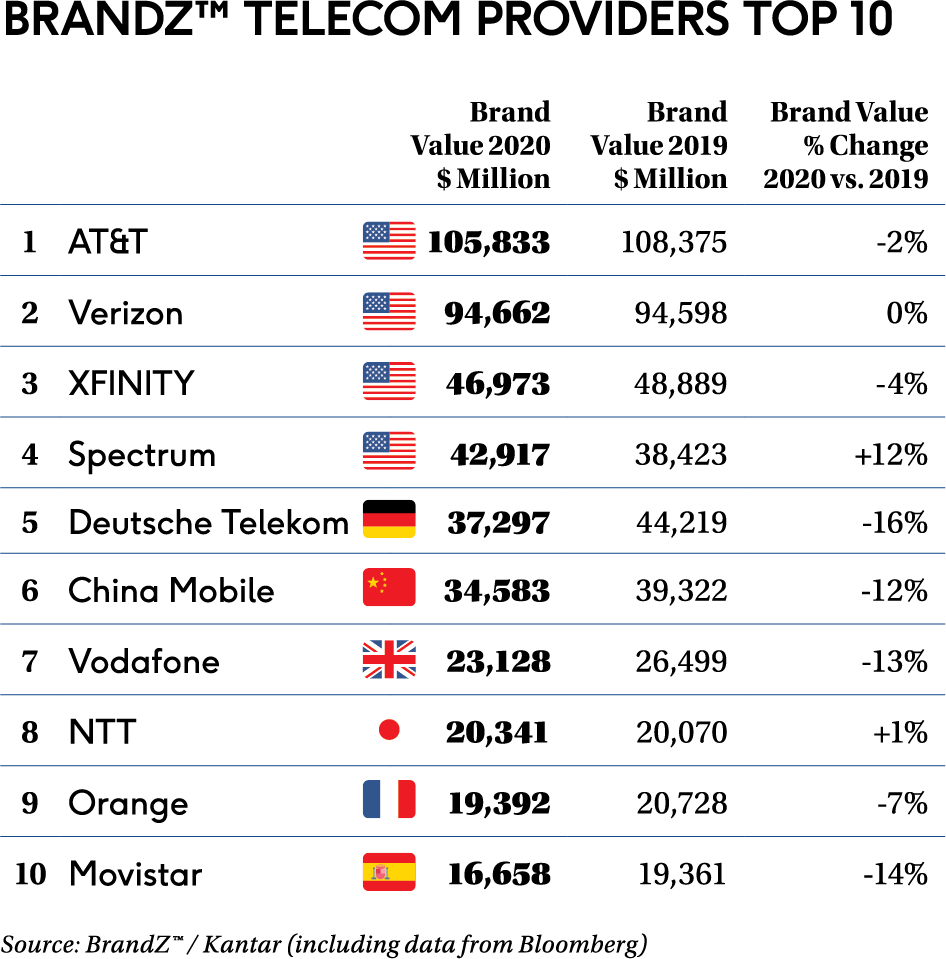 The merger not only resulted in three strong players in the US market, AT&T, Verizon, and T-Mobile, it also produced a new fourth competitor—Dish. An over-the-top streaming service, Dish purchased a prepaid telecom service called Boost when it was spun off from Sprint as a condition of its merger with T-Mobile. Dish plans to use T-Mobile’s network and introduce its own 5G service.

Consolidation reshaped the European telecom market as well, with UK-based Vodafone’s acquisition of the Liberty Global operations in the Czech Republic, Germany, Hungary, and Romania. The deal made Vodafone Europe’s largest provider of mobile and broadband and strengthened its position against key European competitors Deutsche Telekom and Telefónica.

Telecom brands continued the effort to differentiate and be seen as more than a utility. Most notably, AT&T became an entertainment brand with its acquisition of Time Warner. Being a creator and distributor of  content helps free AT&T from being perceived as a commodity, but it does not necessarily ease business pressure as much as it changes them, shifting AT&T into the “streaming wars” and a competitive set that includes Disney, Amazon Prime, Hulu, Apple, and Netflix.

In addition, AT&T introduced AT&T TV, a service that streams more than 100 TV channels over the internet. This new service comes as AT&T’s DirectTV satellite business declines. AT&T acquired DirectTV in 2015, and the launch of the new streaming business reflects the industrywide growth of OTT streaming and the pressure on satellite and cable businesses.

O2, which operates in the UK and several other European countries, refreshed the brand recently with the strapline “Breath it all in” to celebrate the life-giving force that comes from oxygen and being connected. O2 has been successful identifying the brand with music, having rebranded London’s Millennium Dome over 10 years ago as the O2 Arena, which has become the world’s leading sports and entertainment venue in audience size.

Some brands have differentiated by communicating about purpose, which was the intent of a message delivered by Vodafone’s CEO at the 2019 Mobile World Congress. The message focused on building trust, reducing environmental impact, simplifying offerings, and collaborating with like-minded competitors on 5G networking sharing and other projects.

Similarly, France-based Orange intends to differentiate by transforming over the next five years from a pure telecom provider to a digital platform. It is focusing on the development of its network, AI, and data applications to sell more services to both consumers and B2B customers.

In an exercise that involved surveying both internal and external stakeholders, Orange recently revised its raison d’ être, which begins, “As a trusted partner, Orange gives everyone the keys to a responsible digital world.” Some of the specific actions include helping people monitor their screen time and donate unused minutes to others.

Orange began its digital offering with the launch of Orange Bank several years ago and is now expanding its Internet of Things home connectivity and intends to be involved in e-commerce and health and wellness. Through its Orange Business Services division Orange plans to become a leader in cloud technology.

Although France remains the largest revenue market for Orange, the brand is also strong in West Africa, the Middle East, and parts of Europe. Orange introduced a mobile wallet called Orange Money in West Africa and will expand its offering.

Without clear differentiation, a brand’s fallback position often becomes price. Price competition in the UK was expected to intensify after promulgation of contract transparency regulations making it easier to move among providers rather than be locked into contracts.

Even in markets like India or Latin America that leap frogged to mobile, brands are also facing the need to find a distinctive proposition. The lack of a strong brand proposition opens a brand—and sometimes an entire market—to disruption.

In India, Jio rapidly grew market share with pricing that undercut the established brands, precipitating market consolidation and propelling Jio to become India’s leading telecom provider, with around 370 million subscribers. Iliad, which operates a brand in France called Free, has attempted to disrupt the Italian telecom market with price.

To build differentiation as well as margin, many telecom providers bundle offerings of mobile service with TV and internet. In Spain, for example Movistar offers a complete package, while O2 in Spain has a no-frills offer.

Bundling options may change with 5G, sometimes seen as the ultimate cable-cutter. The pace of the 5G rollout varied by country. In the US and UK, the major telecom providers have begun developing 5G infrastructure, but few mobile handsets are 5G capable, and communication around 5G generally has not clearly articulated the consumer benefits. In France, the government was expected to issue 5G licenses in spring 2020 but postponed the process because of Covid-19.

Verizon reorganized its business to focus on 5G and its core strengths in telecommunications, having tried with limited success to develop a media business with its acquisitions of AOL, Yahoo, and the Huffington Post. Verizon streams content on its Verizon Fios fiber optic service. Similarly, Vodafone provides access to content with a paid TV offer, but not as a branded content owner.

In anticipation of 5G, Vodafone, a sponsor of e-sports, entered a partnership with e-sports marketer ESL to stream e-sports events on its 5G network. The mobile gaming experience will improve with 5G, a useful benefit with the growth of cloud gaming from entries like Google’s Stadia. The upgrade to 5G also promises to improve the experience of working remotely. Verizon signed an agreement to acquire BlueJeans Network Inc., a videoconferencing service.

Despite the lack of complete clarity about 5G benefits, consumers are preparing for the technology upgrade. Over a quarter of smartphone owners who intended to buy a new smartphone in the next six months, definitely planned to buy a 5G-enabled phone, according to Kantar Worldpanel ComTech US data. Another 42 percent said their next phone probably would be 5G-enabled. And, according a similar study of five European countries, people plan to pay over £750 ($980) for a 5G-enabled phone.

Having struggled for years to differentiate their brands, the extreme social separation during the Covid-19 pandemic demonstrated the essential contribution made by telecom providers. They provided the wired, wireless, or fiber optic lifeline that connected people and businesses to the rest of the world. With stores closed, however, people purchased fewer mobile phones, which impacted revenue and subscriber growth for some network operators. The pandemic had additional implications for brands like AT&T that expanded into streaming services. While being quarantined at home, people had more time to explore online entertainment, which potentially helped build audience size. But advertising declined as companies cut costs. The telecom category declined 4 percent in value after rising 1 percent a year ago. Anticipating post-pandemic online behavior changes, Verizon signed an agreement to acquire BlueJeans Network Inc., one of the videoconferencing options people used for socializing or working while quarantined at home. 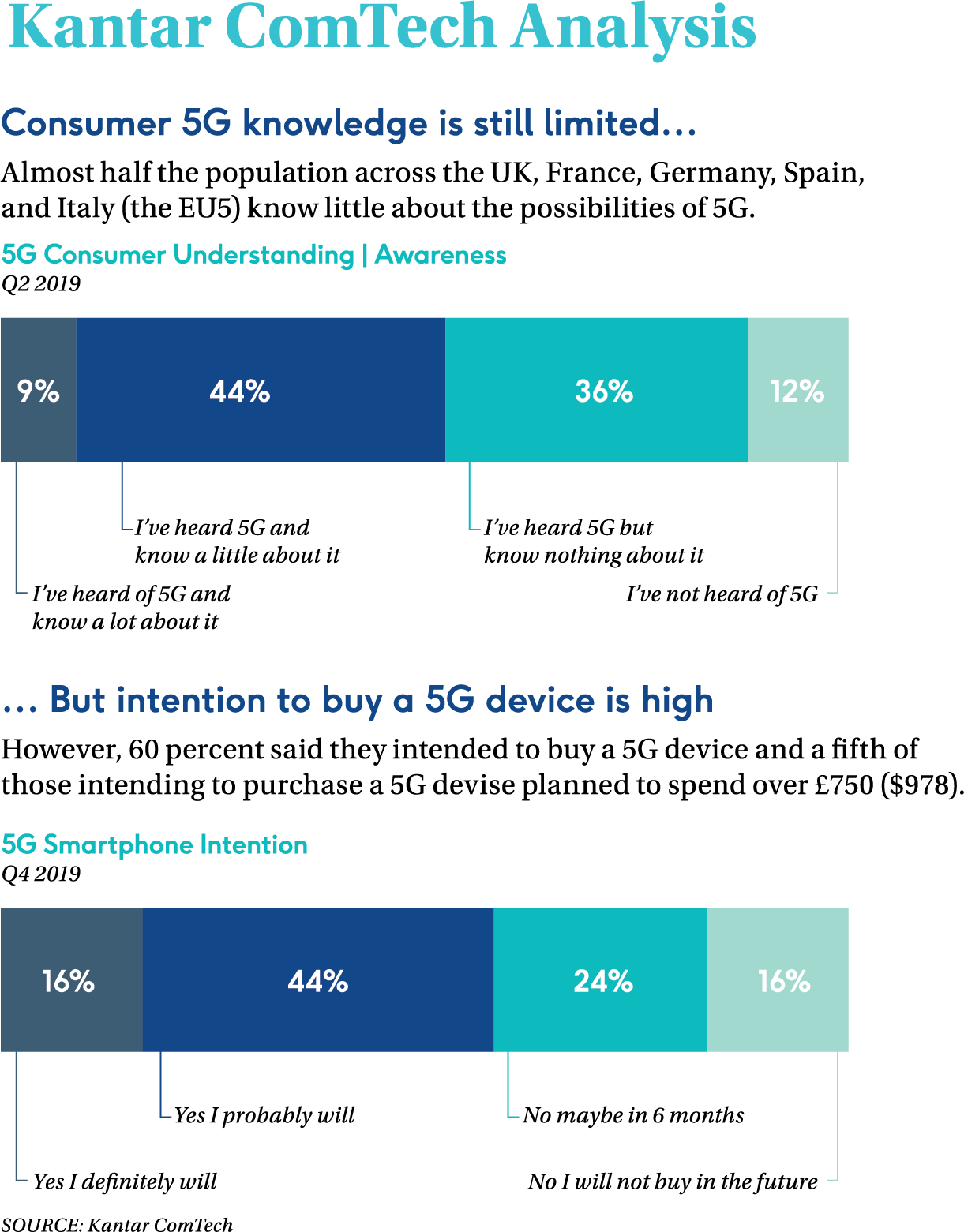 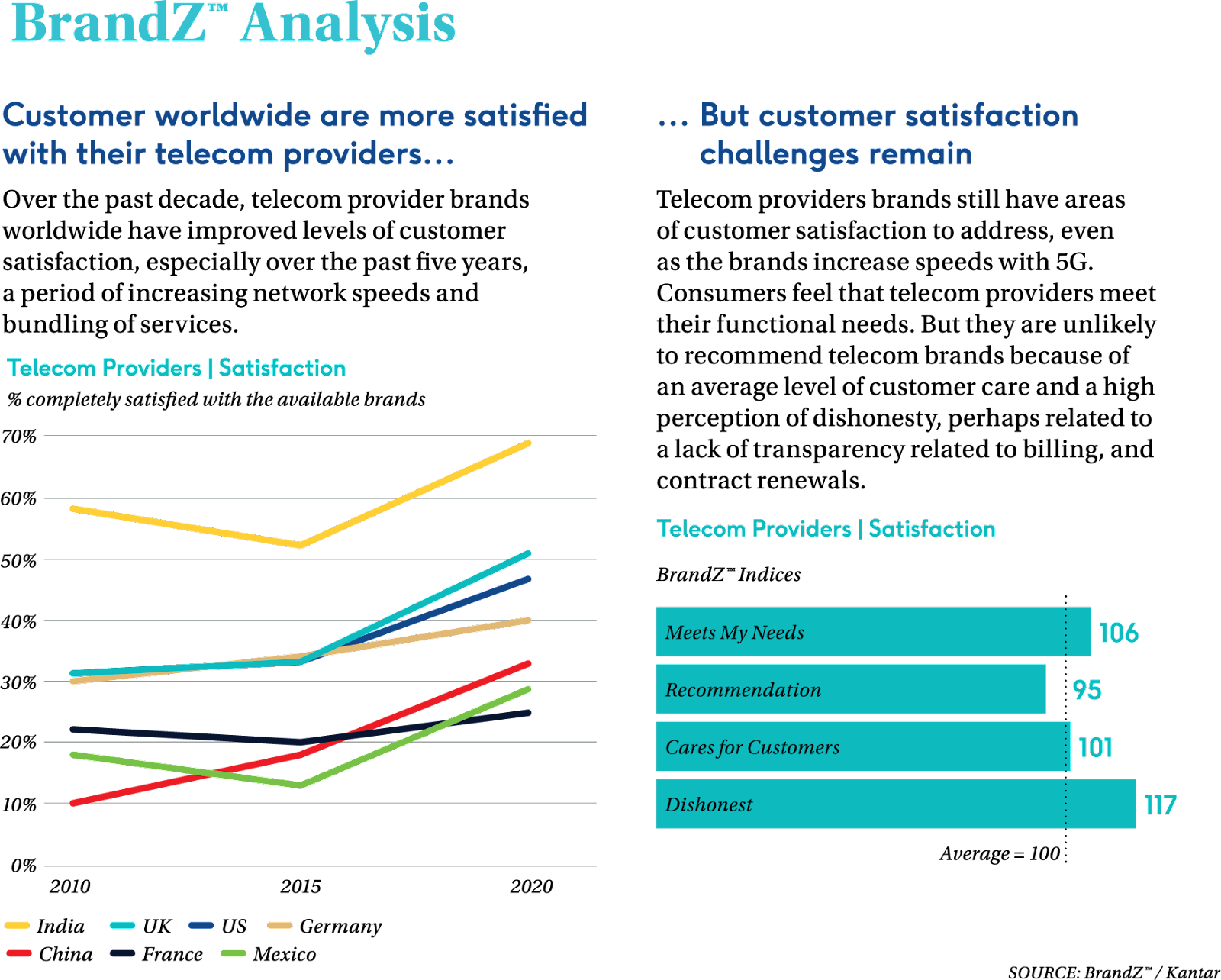 Authenticity is key. But authenticity cannot be invented. A belief in what the brand stands for needs to permeate the organization at every level, including the board, so that every action, every communication is infused with brand commitment and sounds authentic because it is.

To be well received in the market, the innovations that spring from the minds of the engineers need to correspond with the consumer insights emanating from the marketing department. A fuller explanation of 5G could help accelerate consumer acceptance of this new technology, although the full potential of 5G can only be imagined.

By addressing key industry challenges, brands can help improve the lives of their customers. Among these challenges are digital inclusion, especially for brands that serve people in more rural or developing markets and have an opportunity to democratize the technology and empower people. Other challenges include cyber bullying, cyber security, and screen addiction.