It’s year two for the Top 30 South African Brands report, and before introducing its top brands, it’s worth making an introduction to South Africa in 2019.

The country today could best be said to be going through a period of cautious optimism after what president Cyril Ramaphosa has called “nine lost years” of corruption and state capture under former president Jacob Zuma. As a result, major government-led enterprises have gone into a tailspin—and most notably Eskom, the state power provider, and South African Airways, which dropped out of the Top 30 this year. However, 2019 saw the smooth election of Ramaphosa—and an acknowledgement of past abuses with promises of reform. This gives South Africans a guarded space for hope and the possibility of a return to growth.

Such a change certainly would be welcome. The South African economy briefly went into recession in 2018 and contracted 3.2 percent in the first quarter of 2019, which was its worst performance since 2008. Unemployment is at 26.6 percent (for context, South Africa historically has high unemployment, but not that high). Fifty-five percent of young people are out of a job. The country is also seeing inflation, rises in fuel costs, and an increase in VAT, which together promises to cut the buying power of all but the richest South Africans in the coming year.

To a degree, BrandZ Top 30 South African brands reflects this with a decline of 13 percent in brand value in 2019, with banks and retailers being hit especially hard.

That said, if you’re a brand manager in the country, you’re probably scratching your head. After all, the economy was growing until Q1, and many top brands are posting year over year increases in revenue. Meanwhile, BrandZ data shows that Brand Contribution scores, a measure of how much the brand itself contributes to value, are essentially flat on average. What gives?

To answer, we have to pull back the curtain on BrandZ methodology and, in particular, on the financial side. Financials play a large role in the BrandZ methodology for creating its rankings. The reason is that brands are not abstractions and exist in the real world. They employ people, sell products and services, and have real results. Unless you take that into account, you’re merely looking at soft measures and not the true value of the brand.

South African brands clearly faced major macroeconomic headwinds in the last year. The period of our evaluation coincided neatly with a tumultuous time in South Africa, during which, among other things, the country began to learn the extent of the mismanagement of the Zuma years. As a result, the JSE Top 40 fell 20 percent in dollar terms over the previous year, which by itself shows the that SA’s top brands certainly outperformed the average.

More importantly, in order to make like-to-like comparisons, BrandZ reports are financially normalized across countries on a dollar basis. The BrandZ valuation period ended on March 31, when South Africa was undergoing a period of high uncertainty, which caused a 15 percent decline in the rand. So while all but three of SA’s top brands declined in 2019, overall, the data also shows that these strong brands showed considerable resilience in the face of serious macroeconomic pressure. 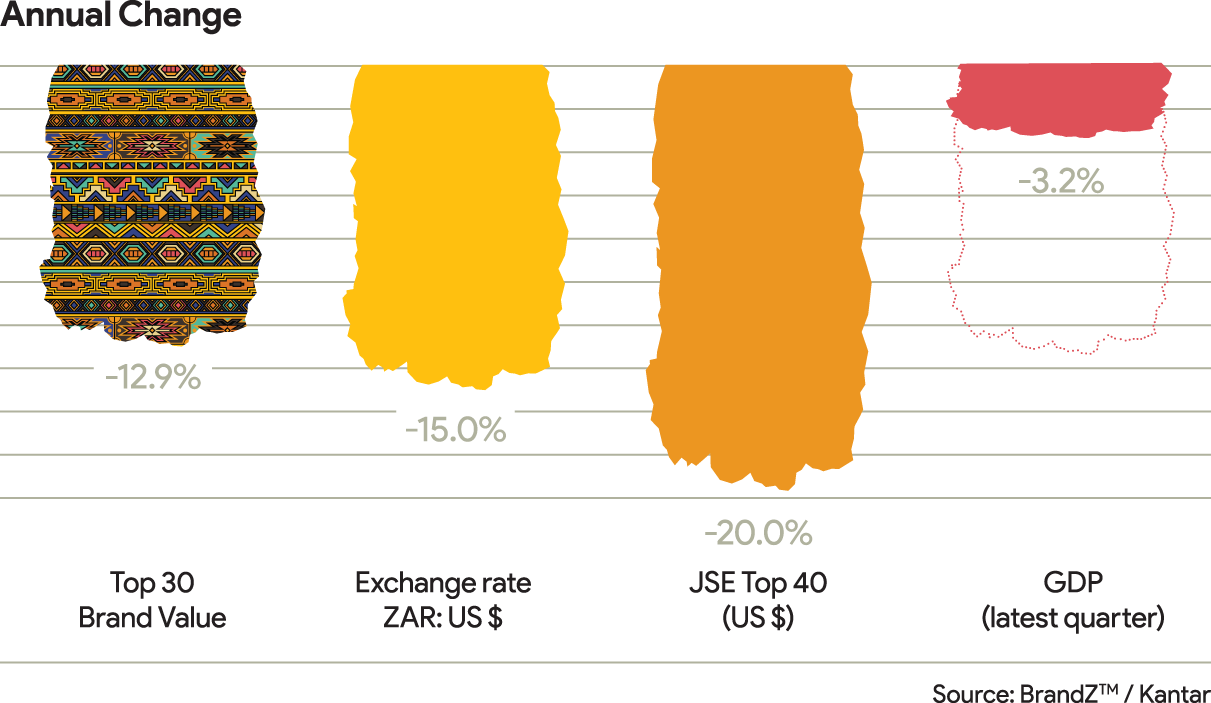 This is largely borne out by comparisons with other countries. While the South African economy is smaller than the rest of the BrandZ countries, when you normalize GDP, South African brands are slightly above average. 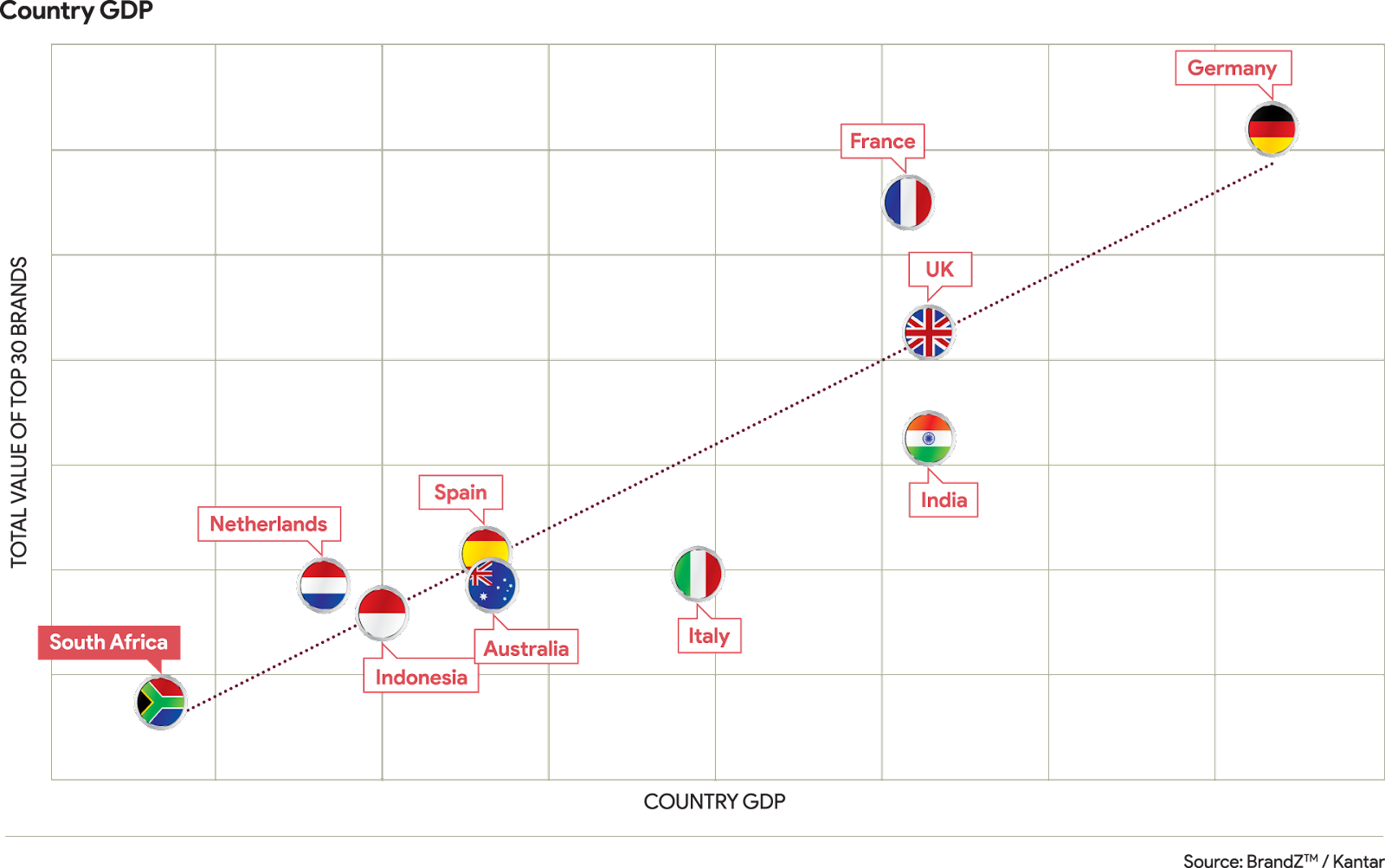 For a final point, South African brands have moved roughly in line with their peers. Compared with most rankings, there are relatively few changes in absolute rank, with most brands either staying the same or moving up or down a single spot. The biggest mover, DStv, did mostly because of a change in its financial structure, though the brand is also doing quite well. And SAA’s sharp fall from the rankings is due to its inability to release financial information in the past two years.

As a result, this report considers the raw numbers in context. It’s more important to compare South African brands to each other: which ones fell more or less, which ones showed resiliency, and which brands managed to eke out growth and how.

So what’s going on

One of the interesting themes that emerged from BrandZ data this year is the role of difference. Brands perceived as different fell only seven percent in 2019 vs. 20 percent for those that were not. The only three brands that increased their brand value this year—Nando’s, DStv, and Capitec Bank—were also among the top brands by this measure.

Being different is a major advantage when consumers have less money to spend. Different brands offer something that consumers can’t get elsewhere. And while consumers may be forced to purchase them less, they still do so—and always are loyal customers when better times return.

The problem, however, is that top South African brands in general are not as successful as their global counterparts by this measure, which probably reflects the insularity of South African brands. Only a small handful of top South African brands generate much of their revenue outside the country, with the bulk of them also accessing equally stressed African markets (both Nigeria and Angola have devalued their currencies in the most recent year, which hit Shoprite particularly hard). To those in country, top brands seem much like their counterparts, with little to distinguish their offerings.

This may be a missed opportunity. In the BAV Best Countries report, South Africa ranked extremely high on measures of difference. People around the world seem open to South African brands, including Nando’s, which leans into its SA identity to create a real distinction from its counterparts both home and abroad.

A more interesting fact is that consumers find top SA brands highly meaningful. Indeed, only four other countries outrank South Africa by this measure. In a way, this isn’t surprising. A lot of the country’s brands are succeeding with a strategy more honored in the breach than in the observance elsewhere: social activism. All North American and European brands to some degree state and express a purpose, often with a jarring disconnect between it and how they actually operate. But, with the country’s collectivist philosophy of ubuntu, which emphasizes helping others, SA brands have taken up purpose with a vengeance, both commenting on and taking part in calls for social and economic justice.

Looking into the future of South African brands, the picture is unsurprisingly murky. While the political situation has stabilized, it is nonetheless much easier to make a mess than to clean it up. But there’s certainly room for optimism, and the market reflects that. Since the end of our valuation period in March, 2018, the rand is up modestly and the JSE is as well.

Nonetheless, brands will be challenged as customers have less money to spend, and that will have a major impact on strategy moving forward. We know from 20 years of BrandZ data that strong brands tend to emerge from recessions more quickly and return to pre-recession growth levels faster than weak brands. On the other hand, brands that go out of business don’t come back at all.

As a result, brand managers in South Africa face tough choices, whether they go all out for revenue and dilute their brands with massive deals and sales. Or do they stay the course, invest in their brands, and remain confident for the future? In the thought leadership section of this report, Charles Foster, CEO Africa & Middle East, Insights Division at Kantar, tries to cut through this Gordian knot, and explain how investment in brand, no matter the economic conditions, is a key factor in future success.

In any case, top brands tend to make the right choices in tough times and this should be no different in South Africa. Observing the best brands top 30, in fact, may be the best way for others in the country to find ways to return to growth. It’s time to pay attention and choose wisely.