There is a way to stop the rot

There is a way to stop the rot

Why UK brands must focus on difference, and do it now

We have shown that UK brands have a major problem. Now we can use BrandZ data to understand exactly what has been going wrong – and what brands can do to turn their fortunes around.

The good news is this: there has never been a better time than right now to win new customers and build lasting loyalty.

What that will take is immense confidence among brand builders to make big, bold decisions regarding how they invest, in order to inspire trust and confidence among the consumers that brands’ very survival relies on. A new cycle of confidence must be set in motion.

Household budgets have in many cases come under unprecedented pressure, forcing people to reassess everything about how they live and the brands they use and buy. Some categories will be dropped altogether out of necessity; in others, people will be looking at their options with a new openness to trying something new.

At the same time, consumers are turning to brands for leadership in these times of fear and uncertainty. They want brands to offer them either comfort or a sense of escape from the world they find themselves in, and they are seeking out brands they can trust.

In fact, levels of consumer trust in brands as a whole have risen 2.8 percent since the first COVID-19 case was reported in the UK. 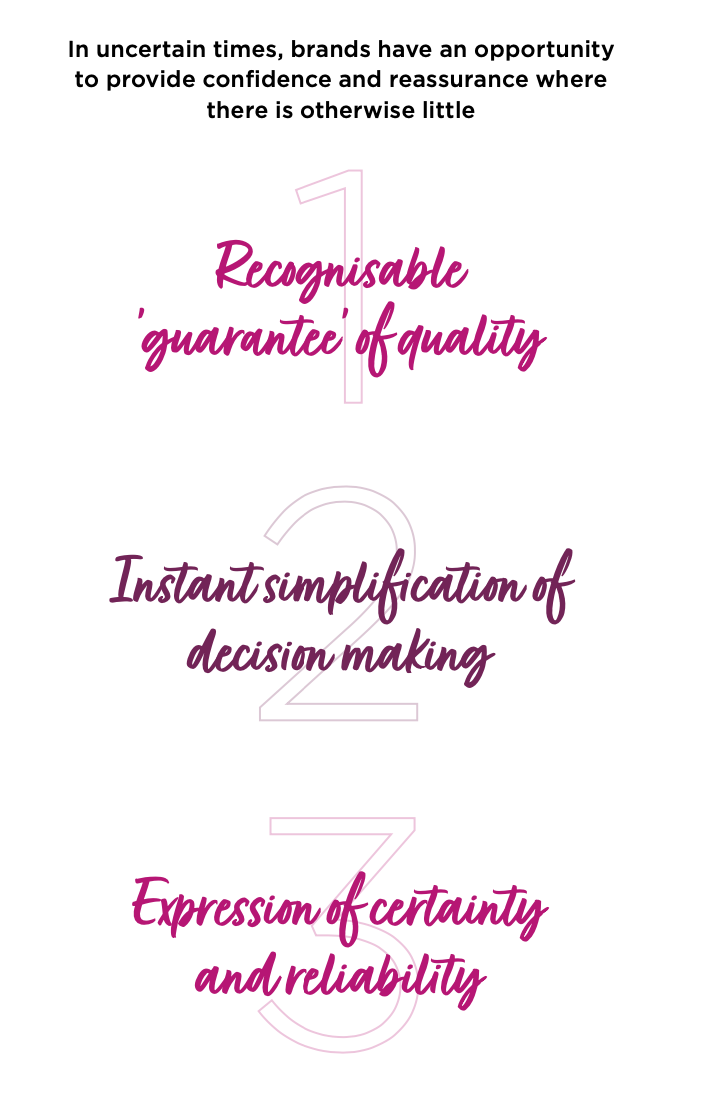 How to stand out – be different!

The most valuable brands, not just in the UK but all over the world, are those that stand out from the crowd in a way that makes a positive difference to people’s lives. It’s really that simple, and we call it having Meaningful Difference.

The Meaning of a brand can stem from a functional meaning – that is the brand does a good job of fulfilling a need consumers have. That could be a reliable banking service, a safe and comfortable car, or a detergent that cleans their clothes. But to have longevity and lead a category, a brand must also have a layer of emotional meaning, which is what creates lasting affinity between consumer and brand.

Difference is what leads a consumer to interrupt their normal buying habits – to stop, and look at a product that catches their eye in a store or online. Or they pause to consider a brand that, in its communications, promises to do something that others in the category don’t. Given that purchase decisions are increasingly being made in seconds, or fractions of a second, that moment of being noticed can be crucial.

What the best brands also have in spades is Salience – a way of amplifying Meaning and Difference that acts as a catalyst for growth.

Highly Salient brands are the ones that spring to mind when a consumer thinks of a category or has a need, but people don’t just think of a famous name. They think of a name they believe will deliver Meaning and Difference.

The interplay between Meaning, Difference and Salience is crucial for brands to appreciate; too often the focus is on Salience at the expense of the other two factors.

To some extent, this is understandable. Brands have traditionally looked to metrics like “unprompted recall” as a measure of their success, and fame is a huge help there. But BrandZ data consistently shows that while recognition by consumers is, of course, important for brands, fame alone is not the route to brand value growth or a healthy bottom line.

Without also having Meaningful Difference, brands that working on building strong Salience alone are essentially shouting in the wind: they make a lot of noise but the effect is negligible.

An imbalance between Meaning, Difference and Salience is at the heart of the problem facing UK brands. They are reaping what they have sown. An erosion of meaningful relationships with consumers has eroded brand value.

The average Meaningful Difference score of the UK Top 75 has declined from 109 last year to 107 this year, only marginally better than the average for all UK brands (100). Yet these same brands’ Salience scores are high. This mismatch – or “Salience gap” – is something we have also seen among declining brands in the BrandZ Global Top 100 this year.

If you’re not convinced that the Salience gap is real, consider this. The travel brand Thomas Cook collapsed in late 2019 after 178 years in business (and before COVID-19 could have been a factor in its demise). It was hugely Salient – a household name across the UK. But its Salience was out of all proportion to its Meaningful Difference, and year by year the Salience gap was opening up as it remained well known but became irrelevant to most UK holidaymakers. 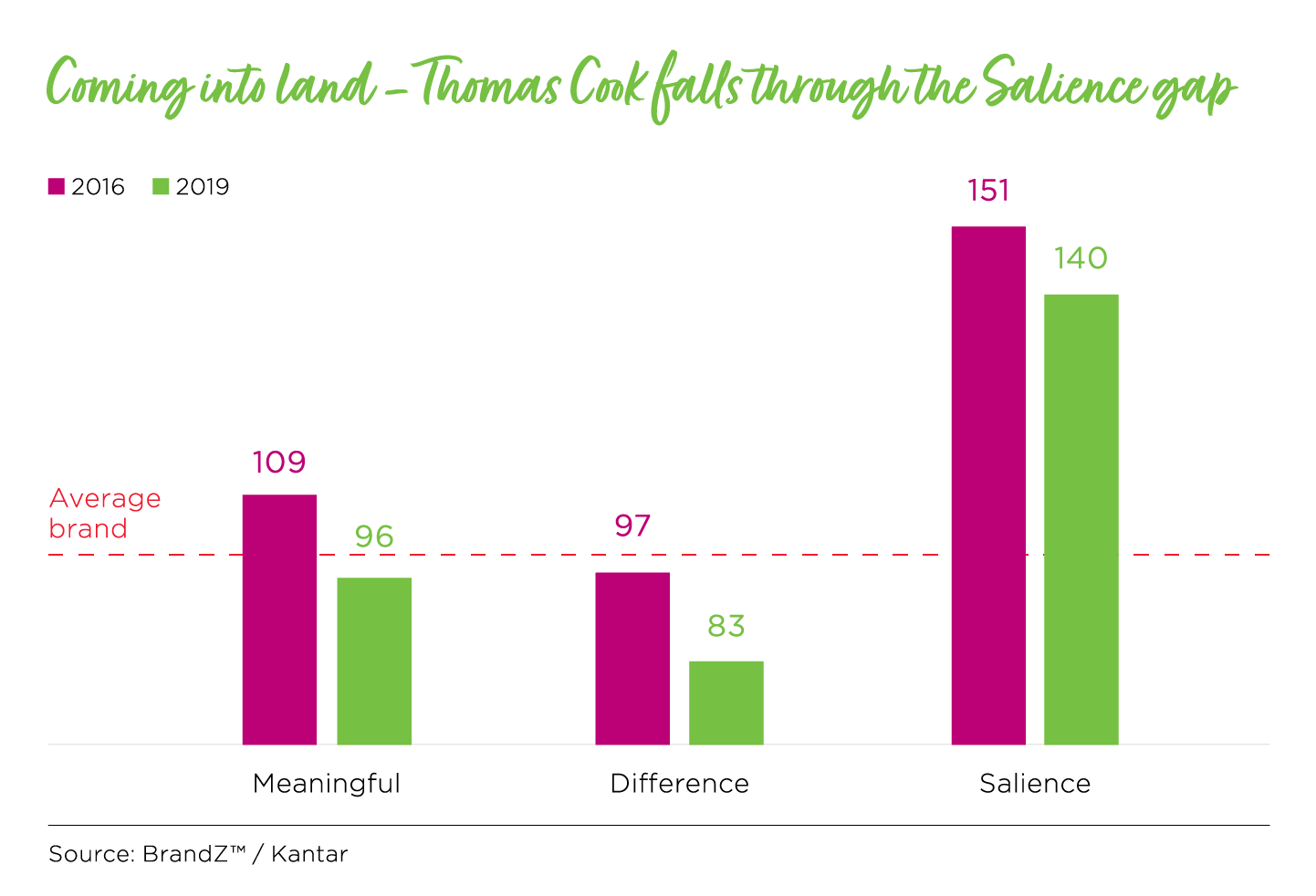 FlyBe is another well-known brand to have slipped into the canyon that is the UK’s Salience gap. Its passing was accelerated by the COVID-19 drop in demand this year, but the writing was already on the wall, with a Meaningful Difference score of 87 and a Salience score of 99 – a gap of 38 percent. And the same applies to many of the High Street retailers that have failed in recent years; Mothercare, Toys’R’us, House of Fraser and Woolworths were not lacking in fame, but what they were famous for was no longer important to consumers.

Contrast this with the performance of the new entrants to the Top 75 ranking this year, and the need for Meaningful Difference to lead Salience becomes crystal clear. There are six new brands in the top 75, coming from six very different business categories. What they have in common is huge Meaningful Difference compared to their Salience, and they are growing as a result. Of course, there are a great many factors that determine the success or failure of a brand, but Meaning, Difference and Salience serve as a powerful barometer of the state of the consumer-brands relationship. 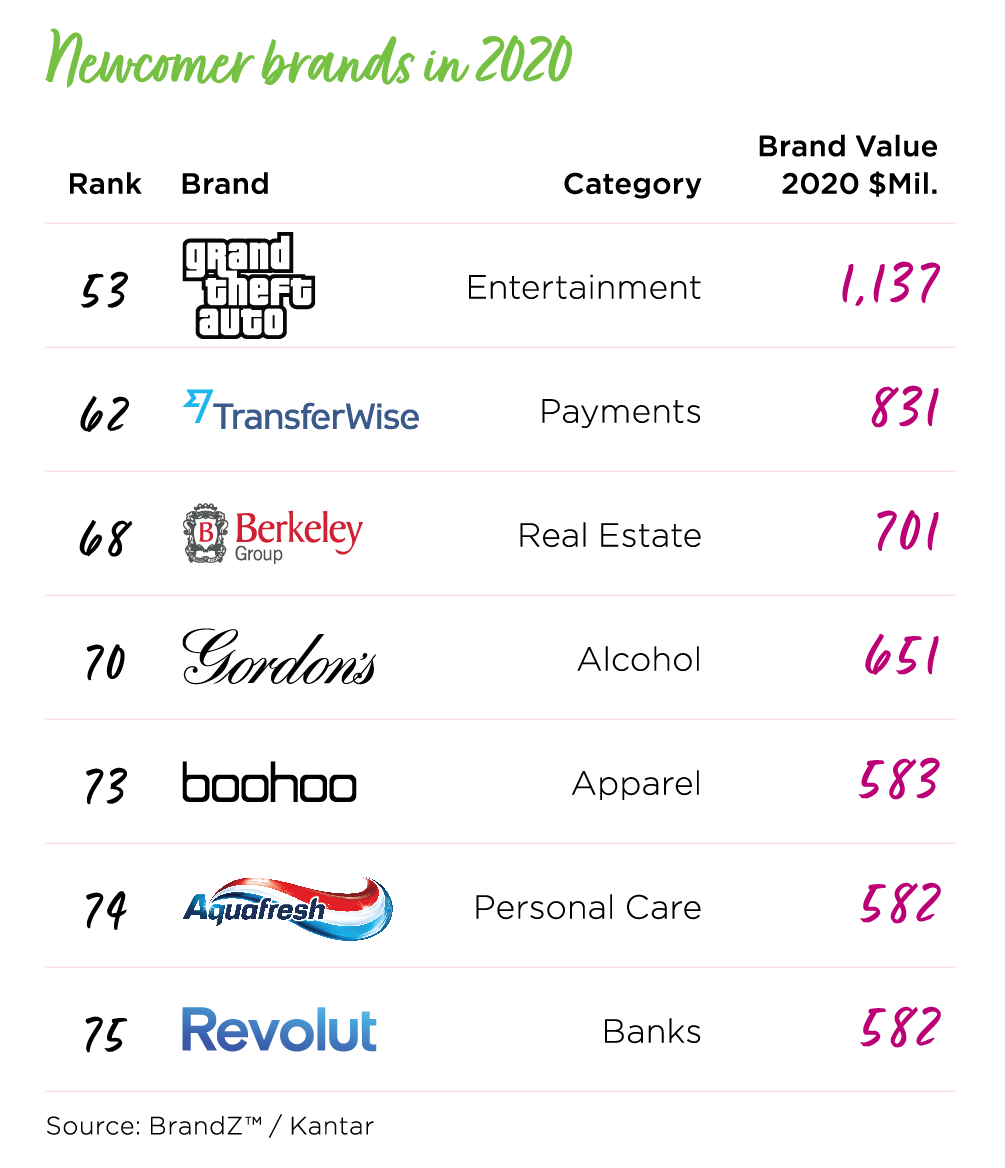 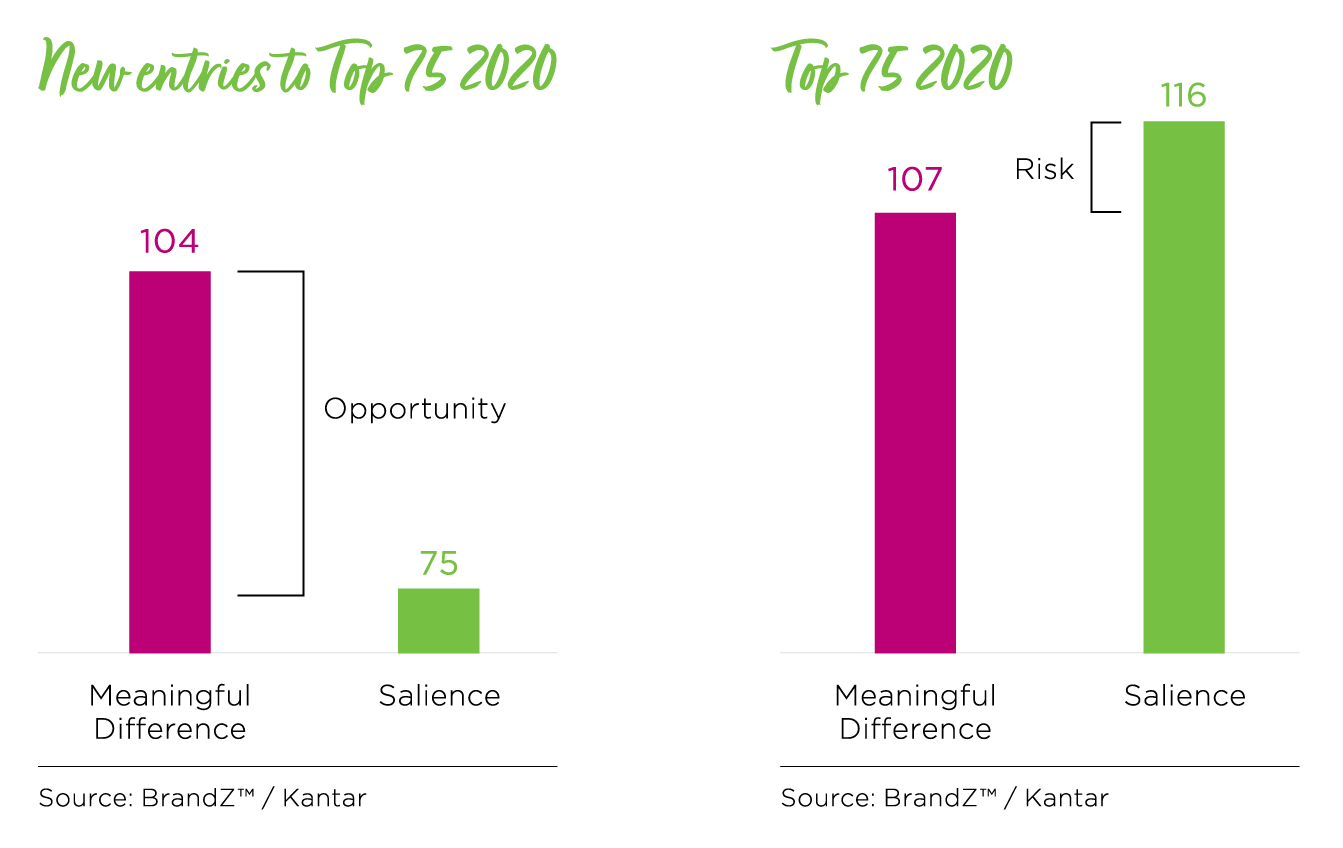 Food fight! How sector rivals are battling it out – and both winning

Two of the three fastest risers up the UK ranking this year are engaged in an intense battle with each other. Deliveroo (ranked 29th, up 39.6 percent) and JustEat (ranked 20th and worth 18.9 percent more this year) are both benefiting from a huge surge in lockdown-related demand that has undoubtedly contributed to their soaring brand value.

But these brands were already on the rise; COVID-19 has simply propelled them along an existing trajectory. The value of food home delivery brands in the BrandZ Top 75 has risen 87 percent since 2018.

The explosion in demand this year – by a factor of 10 since lockdown was announced in March – has fuelled an already intense battle between the two brands that has been heightened by takeover deals. JustEat merged with Takeaway.com in April, giving it greater scope and reach, and Amazon’s planned investment in Deliveroo has been given a provisional green light by the competition watchdog.

Kantar Worldpanel data shows that over 35 percent of Brits ordered takeaway in the 12 weeks to mid-June this year, up nearly 18 percent on the same period last year. Demand was especially strong in the week just before lockdown (up 57 percent on 2019 figures) as people sought to recreate at home the meals they would ordinarily have had in restaurants, pubs and cafes. In many households, a regular takeaway meal became a highlight of the week during lockdown; something to look forward to and plan for when so much else was not possible.

This boom in demand goes some way to explaining how it’s possible for both Deliveroo and JustEat to do so well; they each have a share in a pie that is growing. But the other factor is that they are perceived by consumers as being quite different to each other - and to the rest of the market.

Though JustEat currently dominates demand, Deliveroo has greater momentum, and a better relationship with younger customers thanks to an adventurous brand personality. JustEat has much more Salience among the over 35s, and has the edge when it comes to convenience, range and perceived superiority. 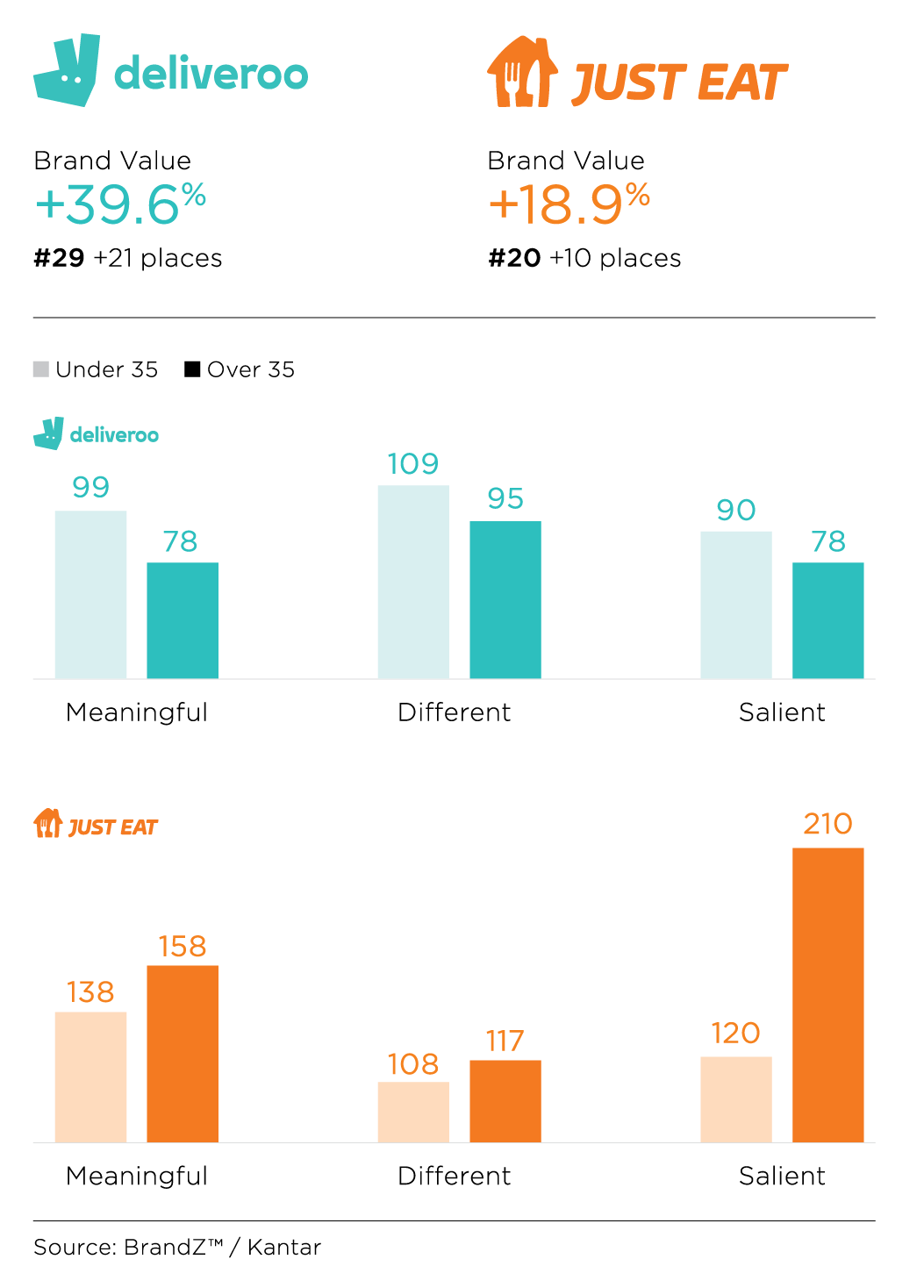 And now for something completely different

To appreciate what a truly Different brand looks like, think of Dyson. Its products are different, its customer service is different, and it stands out in a market of – let’s be honest – fairly boring appliances with its funky colours, innovative designs and functions, and premium pricing.

Dyson’s brand value has grown by 51 percent since 2017, making it by far the fastest-growing brand in the BrandZ UK ranking’s history. Its growth has been turbo-charged by differentiation, innovation and product excellence. This trio of positive attributes has helped it grow sales and preference all over the world.

Consumers rate Dyson as significantly better designed than others in the category, they see it as a leader, and rate its specialist credentials as well as its creativity and desirability. 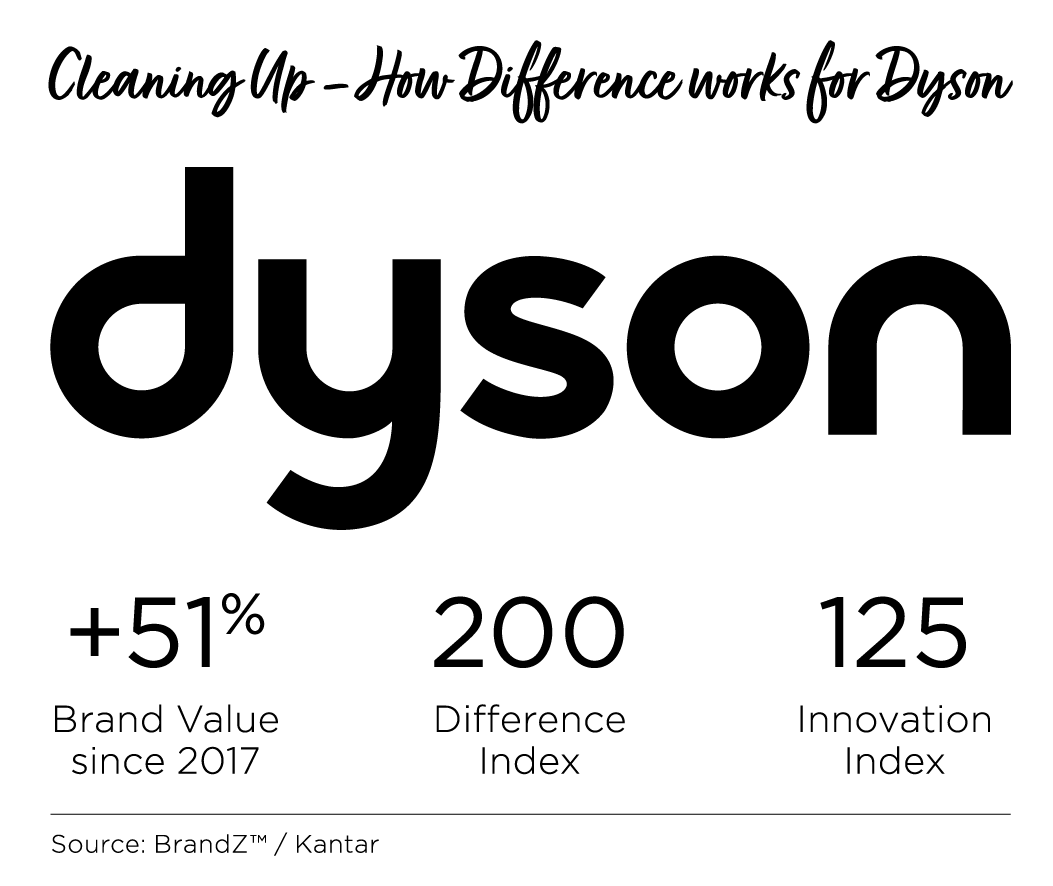