With 6 brands, technology is most represented

The Top 20 Risers, the brands that increased most in value year-on-year, came from 10 categories, indicating the possibility of strong brand appreciation in just about any sector of the economy.

Technology was the most represented category, with six brands, and technology influenced the rise of brand value in most of the categories. Based on its popularity compared with other social media platforms, including its parent brand, Facebook, Instagram led in year-on-year value increase, with a rise of 95 percent.

Salesforce and Adobe score high in BrandZ™ measurements of innovation and rose in value 58 percent and 57 percent, respectively. Each brand has created a cloud-based business in which it dominates, Salesforce in Consumer Relationship Management, and Adobe in graphics and digital solutions.

Having refreshed its corporate culture, Cisco took advantage of being in a business sweet spot as a component supplier for some of the technologies that are transforming the world, including 5G telecommunications, the Internet of Things, and autonomous vehicles.

Microsoft, which grew 25 percent in value, continued to expand its Azure cloud business and invested in its Masterbrand as it focused additional attention on consumer business.

LinkedIn, with a value increase of 46 percent, has a strong reputation among users and has grown rapidly in value since its acquisition by Microsoft in 2016.

Technology helped produce increases in value in other categories, such as the increasingly crowded entertainment category, where technology combined with brand building helped drive a 65 percent increase in value for Netflix. YouTube rose 29 percent.

Two retail brands, Amazon and its subsidiary, Whole Foods, rose 52 percent and 28 percent, respectively, in value. Amazon has caused disruption across categories by perpetually expanding its offering and improving the technology it uses online, in physical stores, and distribution centers.

Recovering from food safety issues, fast food brand Chipotle increased 40 percent in value. Digital sales rose over 40 percent and accounted for 10.9 percent of sales in 2018. Having turned around the brand several years ago on the strength of digital and artificial intelligence, Domino’s Pizza introduced a promotional use of AI for its loyalty program. The brand rose 29 percent in value.

In the payments category, Mastercard tried to future-proof for a time when financial transactions might be possible without a mediator facilitating the payment. Mastercard removed its name from its logo, leaving the intersecting red and gold discs to represent the brand, along with an audio identity. PayPal acquired iZettle, the Swedish company whose technology enables small business to accept contactless payments.

Both of the luxury brand Top Risers, Saint Laurent/Yves Saint Laurent and Dior, established strong brand equity in China, particularly among Millennnials. The personal care brand Shiseido, based in Japan, also developed a strong following in China, and in the West.

With its clever advertising, the insurance brand Geico built Salience and Meaningfulness based on a perception of fair pricing, according to BrandZ™ analysis. Uber, which entered the BrandZ™ Global Top 100 at rank No. 81 last year, rose to rank No. 53 on a brand value increase of 51 percent. 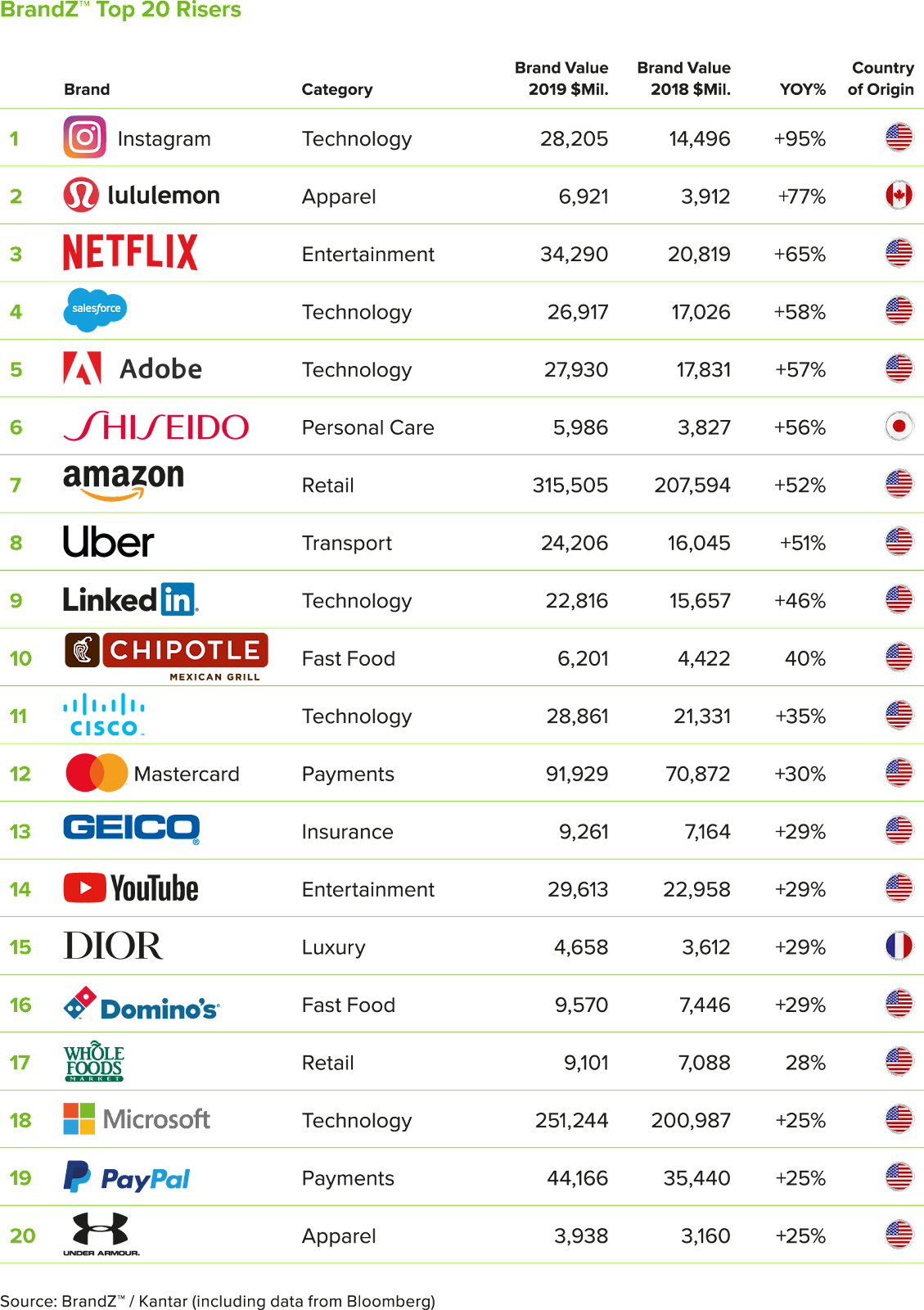