The presence of three automotive brands, the same number as in last year’s Top Risers, reflects the strength of the automobile category and the insight certain brands exhibited, responding to changing consumer preferences with innovation and new launches. Led by strength in passenger cars, especially SUVs, automobile production grew at a compounded annual growth rate of 9.4 percent to 18.8 units during the 12 months ending in June 2017, according to the Society of Indian Automobile Manufacturers. The automobile category in India includes both two-wheel and four-wheel vehicles.

The two bank brands increased value despite bad debt issues that slowed category value growth a year ago. One brand is private, the other is a public-sector bank, indicating that, regardless of legacy, customer focus can lead to growth. The life insurance brand reflects the category’s potential as India’s middle class expands and customers seek to grow their wealth and build protection for themselves and their families. The FMCG brand is a rebound story. 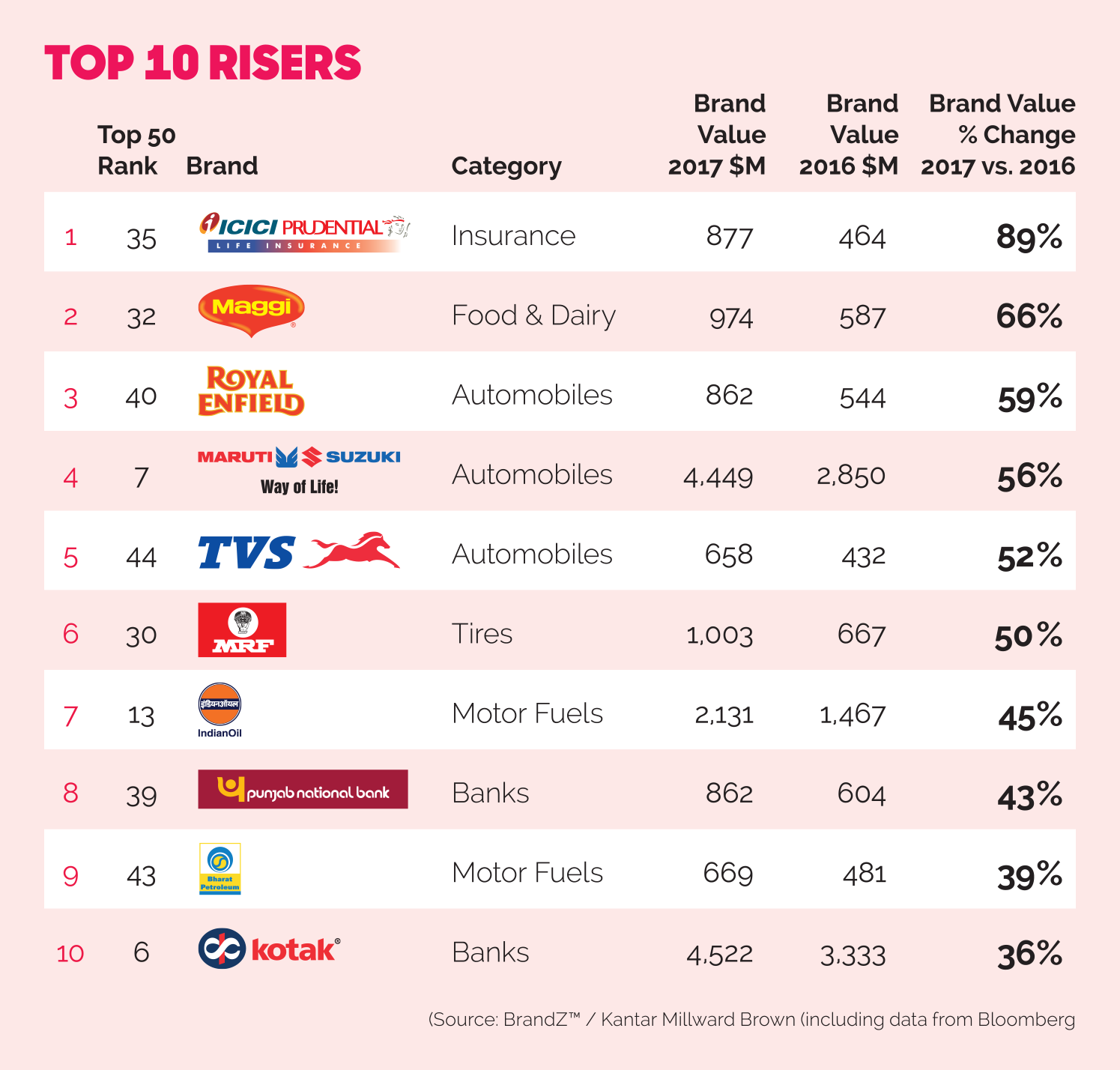 Royal Enfield, a motorcycle brand known for performance and driving experience, benefited from a growing consumer interest in more powerful motorcycles. Around 20 percent of consumers who consider purchasing the brand are car owners, according to Kantar Millward Brown BrandZ™ research. Royal Enfield supports biker groups, engaging them on social media, and it markets Royal Enfield-branded motorcycle accessories. Because of its brand strength, Royal Enfield also enjoyed strong export sales. The brand value increased 59 percent, on top of a 35 percent rise a year ago.

Maruti Suzuki stretched the brand beyond its traditional appeal to the value segment of the market. While Maruti Suzuki brand launched models for its core customers, it also introduced new showrooms, called Nexa, to reach premium customers through an exclusive channel instead of its existing dealer network. Known as a brand that offered good after sales service, Maruti has enjoyed a high level of Trust and good word of mouth, according to Kantar Millward Brown BrandZ™ research. The brand has added Status and Innovation as key drivers of consideration. Its 56 percent value increased followed last year’s 23 percent rise.

In contrast, TVS stuck with the basics, emphasizing the features and fuel economy of its two-wheelers to take advantage of the increasing interest in scooters. Until recently, scooters had been an entry point for shoppers who eventually would trade up to a more expensive car. Scooters have become the Indian household’s second vehicle, however, relied on for utility, convenience, and versatility in winding through crowded urban streets. TVS increased value 52 percent.

Automobiles need tires, and that the 50 percent value rise of tire-maker MRF is partly explained by its strength as an original equipment manufacturer (™EM) to automobile manufacturers. MRF also benefited from the rising prices for Chinese tires sold in India. At the same time, MRF leveraged these favorable conditions by aggressively marketing, particularly on TV, and engaging sports celebrities, usually cricket players, for ad campaigns.

ICICI Prudential increased the price of certain key policy premiums, which now average twice the price of equivalent products from private players. It accomplished this price rise through strategic collaborations across different bancassurance partners. ICICI Prudential led the Top Risers with an 89 percent increase in value, following a 10 percent decline a year ago.

The Top Riser banks—Punjab National Bank and Kotak Mahindra Bank—cultivated their brands in different ways. A state bank, Punjab National Bank is customer-focused and more agile than some of its competitors. Because its branches are located primarily in the industrial areas of India’s north and west, the bank was less exposed to problems with farming loans. Punjab National Bank increased value 43 percent, following a 51 percent decline a year ago.

Kotak Mahindra Bank launched India’s first mobile bank. It plans to double its customer base in the next few years led by the digital channel. The brand’s 36 percent rise in value follows a 39 percent rise a year ago.