There’s a long list of pressures on the British UK High Street, many of them resulting from consumers’ increasing use of online alternatives to physical stores.

Consumers now have incredibly high expectations when it comes to convenience, range, speed of delivery, and competitive pricing.

Pressure on the High Street is only going to intensify, with the advent of online-to-offline retail – digital brands that are opening physical shopping spaces.

Amazon, for instance, recently launched its Clicks & Mortar initiative in Manchester, giving shoppers chance to see in the flesh brands that have only previously been available online.

Globally, retail is undergoing a period of huge growth. It was the second-fastest-rising category in this year’s BrandZ Global Top 100.

But while leading global retail brands are growing in value by 25 percent – led by the likes of Amazon and Alibaba – in the UK, the retail brands in the BrandZ Top 75 grew by just 3 percent.

Most of their combined growth in brand value this year is down to the online-only players Ocado and Very; without them, the retail brands in the Top 75 would actually have seen a decline in combined value, of 1 percent.

So, where’s it all going wrong? Many of the failed retail brands – not just UK-based brands but also international names with a long history of trading in the UK – were far better known than they were distinctive or relevant.

In fact, the electronics chain Comet was extremely well known, with a Salience score of 191, almost double that of the average brand. But what it lacked was something important to be famous for: in the end, it was significantly less Meaningful and Different than other brands in its category. The UK’s retail success stories underline the point that in any industry, but especially in retail, fame is not enough to sustain a brand. The fastest-growing retail brands are far more distinctive and emotionally relevant than they are well known.

Consider this collection of online retail brands: Asos, Boohoo, Missguided and Very. They are all brands that are more Meaningfully Different than they are Salient. They are especially strong on Difference, which we know tends to be a lead indicator of growth. These brands also over-index other retail brands when it comes to being seen as adventurous, creative, sexy and playful.

They happen to be brands that are strong online, but digital brands don’t have a monopoly on being relevant, dynamic and forging emotional connections. 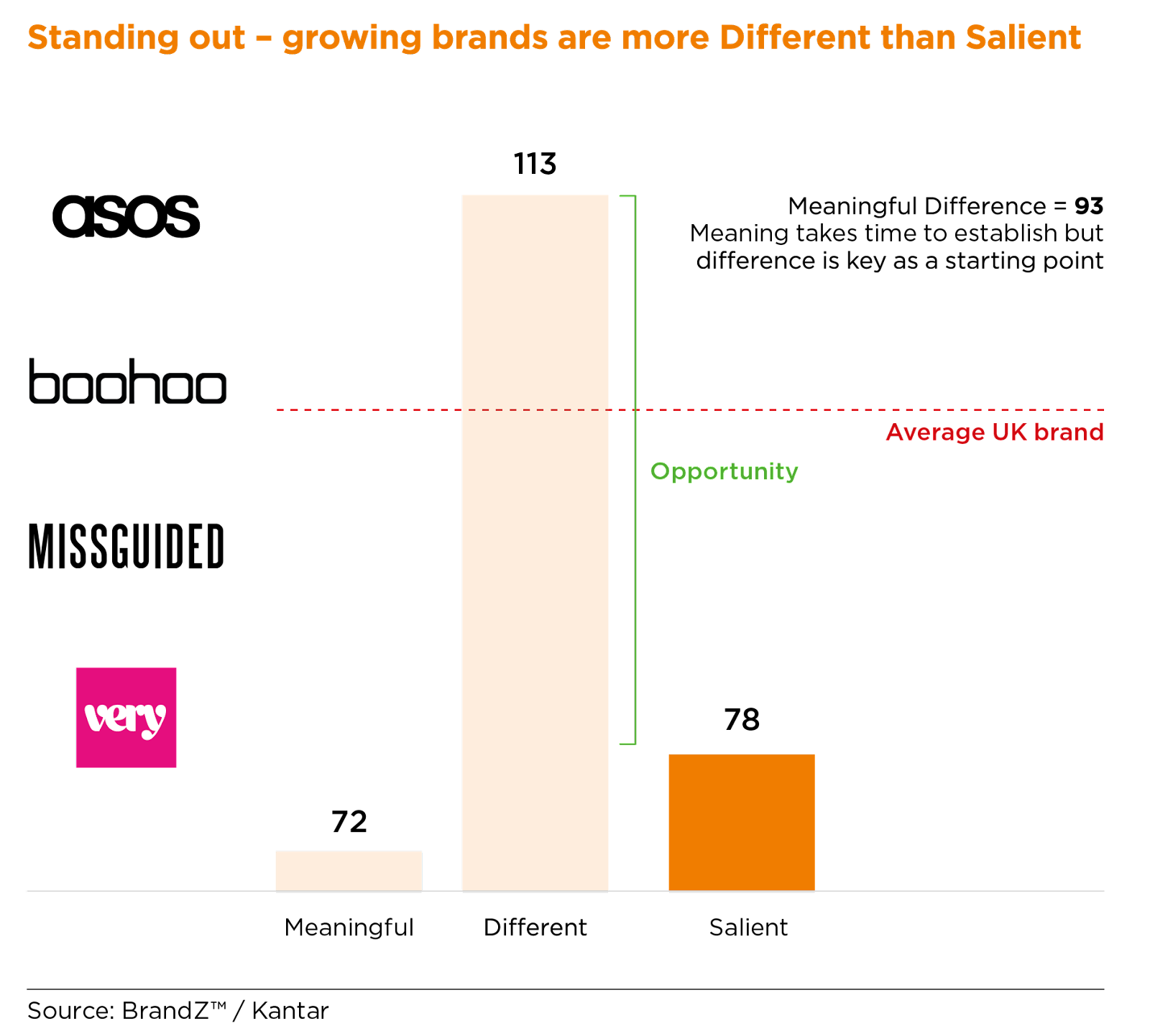 Primark isn’t a UK brand – it’s Irish – but it’s been a fixture of many UK High Streets for decades, so it’s faced the same shifts in consumer habits and the same challenges of operating physical space in an increasingly digital sector.

Yet while others have failed, it has flourished. It’s now celebrating 50 years in business, is expanding into new international markets, and is succeeding despite offering no online ordering service. What drives it is Meaningful Difference – a clear proposition built around value-for-money fashion.

Online communications are a strong part of keeping the brand relevant to new generations of consumers; Primark markets heavily with celebrity influencers and via collaborations – there is a new Disney range to coincide with the release of the Lion King film – to drive young people in store.

Banking and finance, like retail, is being transformed by consumer access to growing numbers of online brands and services. This, in turn, is raising expectations of more traditional banking services, with an emphasis on online accessibility and ease of use.

In the UK, mobile banking is set to overtake visits to branches within two years; around 2,900 branches have closed nationally within the past three years.

The eight banking brands appearing in both the 2018 and 2019 BrandZ Top 75 rankings have declined by an average of 7 percent, and have lost $2 billion in value in the past 12 months. They are: HSBC, Barclays, Lloyds Bank, Standard Chartered, NatWest, RBS, Nationwide and Bank of Scotland.

While brand equity and value has declined for the most valuable UK banks, the Monzo proposition is viewed as incredibly different. Monzo is not yet large enough to feature in the UK Top 75 ranking, but sets itself apart via strong perceptions of online superiority alongside a distinctive look and feel. Impressively for a brand just four years old, Monzo has quickly gained momentum, and is clearly associated with innovation, creativity, disruption and distinctiveness.