Across generations, consumers will abandon brands that betray trust

With rising consumer concern about privacy and misuse of personal data, brands need to be more transparent and they need insight into the changing value equation. It is clear that brands are penalized for misbehaving. How do they build and sustain trust, and what is the ROI for trust?

In the past number of years, there has been a distressingly long list of examples of companies behaving badly, and in the process abusing and losing public trust. Examples include cryptic or misleading explanations for how personal data would be used, irresponsible distribution of harmful fake news, failure to protect against or transparently report data theft or database breaches, serial personal misconduct by those in power which is condoned or covered over, and in small but still depressingly significant number of cases, outright fraud. The consequences have equally run the gamut from shaming on social media, consumer defection, negative impact on sales and share price, millions spent on apology communication campaigns and in some cases large fines from industry or governmental organizations.

So, it is clear there are consequences to corporate misbehavior and betrayal of trust. But is it enough to just not behave badly? Can the case be made that prioritizing and investing in actions that build and sustain trust can result in sustainable long-term return on trust?

Case in point 1. In a world in which consumers are bombarded with choices, they give their loyalty to brands that act authentically and demonstrate a commitment to a purpose that goes beyond profit.

The up-and-coming generation of consumers, born just before, or soon after, the turn of the century (and hence named Centennials), have been raised to believe they have the power to change the world, and they expect brands to which they give their loyalty to be working to do the same. According to Kantar’s US MONITOR survey (US Centennial population, ages 12-to-20), a full 72 percent believe that brands play an important role in society and are responsible for making it better. Edelman Research’s 2018 Earned Brand Global Report found that 1-in-2 people chose, switch, avoid, or boycott a brand based on its stand on societal issues.

Nike offered perhaps the most publicized example of brands taking a stand in recent times, with its “Dream Crazy” spot, which featured controversial athlete Colin Kaepernick, and the tagline “Believe in something, even if it means sacrificing everything.” While the ad sparked online protests and boycotts, it was a bold move targeted at their Centennial customers, which was rewarded with valuable earned media. Nike business resurged in the period following the release of the ad. 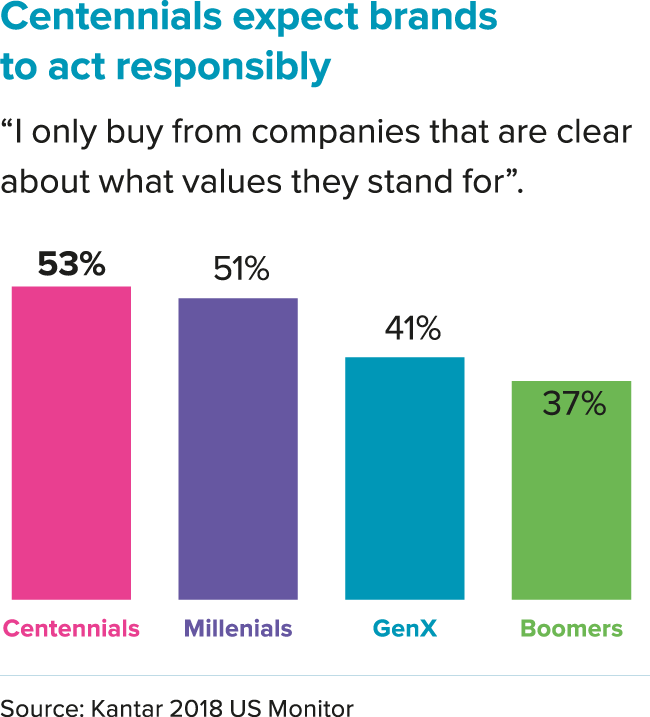 Case in point 2. Easy sources of growth are gone. In the future, growth for brands will come from expanding into new, and possibly uncomfortable, places that will require consumer trust and permission to succeed.

In certain competitive categories, brands are succeeding by focusing on developing products that complement their core range. This activity is in addition to, or instead of, focusing on incremental improvement to their core range. For example, even as growth for iPhone is losing ground, Apple is increasing its service businesses, including financial services and its first credit card. Amazon, which famously makes little money on its core e-commerce business, leads the market in Cloud computing (where security is a significant concern) and home hardware (Amazon Alexa), which may eventually become a major new channel for commerce. Neither Apple nor Amazon were well known or experienced in these spaces before they entered, but they had built large reservoirs of credibility and trust by relentlessly focusing on seamless and frictionless customer experience and by being good and careful stewards of the data with which consumers entrusted them (worthy of consumers’ opening their personal finances and lives).

As Brands consider strategies to drive growth, they need to keep in mind, breaching trust can have lasting consequences. 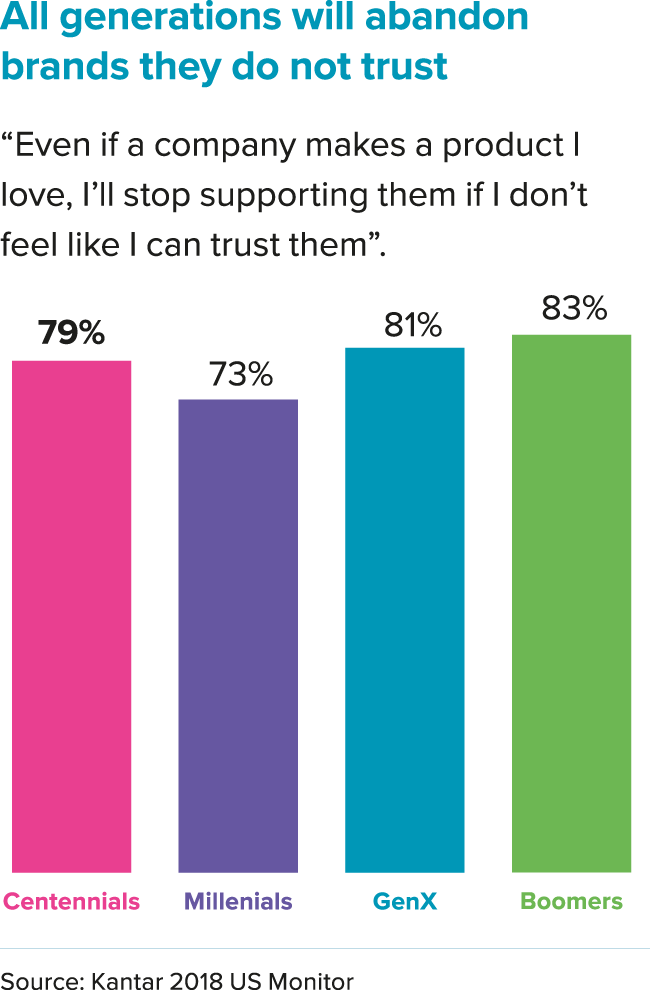 Ask yourself what new categories might be open to your brand if consumer trust is strong and sustained? How might short-term-profit-oriented behavior put your brand at risk of losing consumer trust, or block future opportunities?

Case in point 3. As illustrated by the BrandZ™ metric “TrustR” (Trust fortified with willingness to Recommend), trusted brands are more likely to be financially successful.

One of the most important and useful findings from BrandZ™ is that brands with the highest financial value also are likely to be highly trusted and recommended. When we calculated the TrustR scores of the Top 100 Most Valuable Global Brands, the positive correlation between a high TrustR score and brand value represents a compelling financial validation for the sentiments expressed in the above 2 cases. 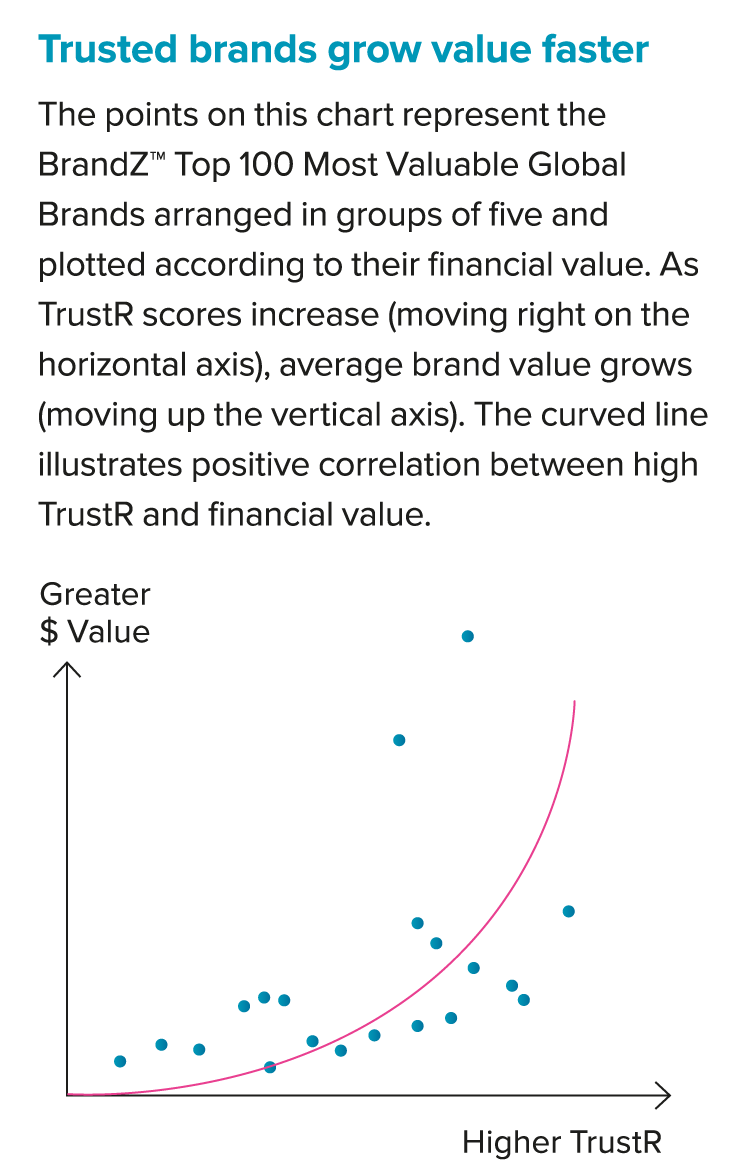 Ask yourself how many consumers trust your brand sufficiently to proactively recommend it? How much business are you leaving on the table by not developing a sustained, trusted relationship?