The UK ranks fifth in the world out of 80 countries in the latest global Best Countries ranking, an international study identifying the strengths, weaknesses and changing perceptions of countries.

This marks the second year in a row that the UK has dropped one place in the ranking. The UK remains a powerful global brand, best known for its world-leading education system, its global connections, influence and alliances.

It also scores well for entrepreneurship and cultural influence, and these indicators – along with a sense of prestige and fashion associated with Brand UK – provide opportunities for exporters across a range of sectors.

In the Origin Index on page XX, we explore international opportunities for “Made in the UK” products and services, and identify sectors where demand for British products is not yet matched by supply.

The Best Countries Report is now its in fourth year. It is the world’s largest study of nation brands, based on research among more than 21,400 people. Best Countries is a project by U.S. News & World Report, VMLY&R’s BAV Group and the Wharton School of the University of Pennsylvania.

The UK has lost ground in the minds of many of the groups of people consulted for Best Countries, perhaps partly as a result of the ongoing wrangling over Brexit, but also as a result of stiff competition from other leading industrialised nations.

Among business decision makers, the UK has slipped down three places from #2 last year to #5 this year, overtaken by Japan, Germany and Canada. Adults aged 45 or more now place the UK in seventh place (four spots down from a year ago), behind Germany, Japan, Sweden and Australia.

The people we call “informed elites” because of their level of education and interest in global affairs put the UK in seventh position, down three places. Among young people, the UK remains where it was for them last year, in fifth place.

The net effect of these movements when the different groups’ input is combined is an overall loss of one place.

How the UK compares to the world

The UK’s international reputation centres on its long-established role as a world leader on the economic and political stage. It offers transparent institutions and systems that provide stability for businesses, much to attract overseas visitors, and provides a good place to live for people at all stages of life, from childhood to retirement.

The quality of education the UK offers help it stand out internationally, and this in part explains the strength of the UK’s brand among young people. The country is home to world-leading universities as well as schools with a global reputation built up in some cases over centuries. The UK ranks fifth in the world among the best countries for overseas students, and has overtaken South Korea, Qatar and the Czech Republic on another key measure that matters especially to younger people: it’s seen as one of the best places in the world to start a career (rising from #10 to #8 this year).

The UK improved in the ranking as a leading country to headquarter a corporation, rising from #13 to #10 (overtaking Norway and Finland); at the same time, however, it slipped from #10 to #13 when respondents were asked about the best countries in the world to start a business. 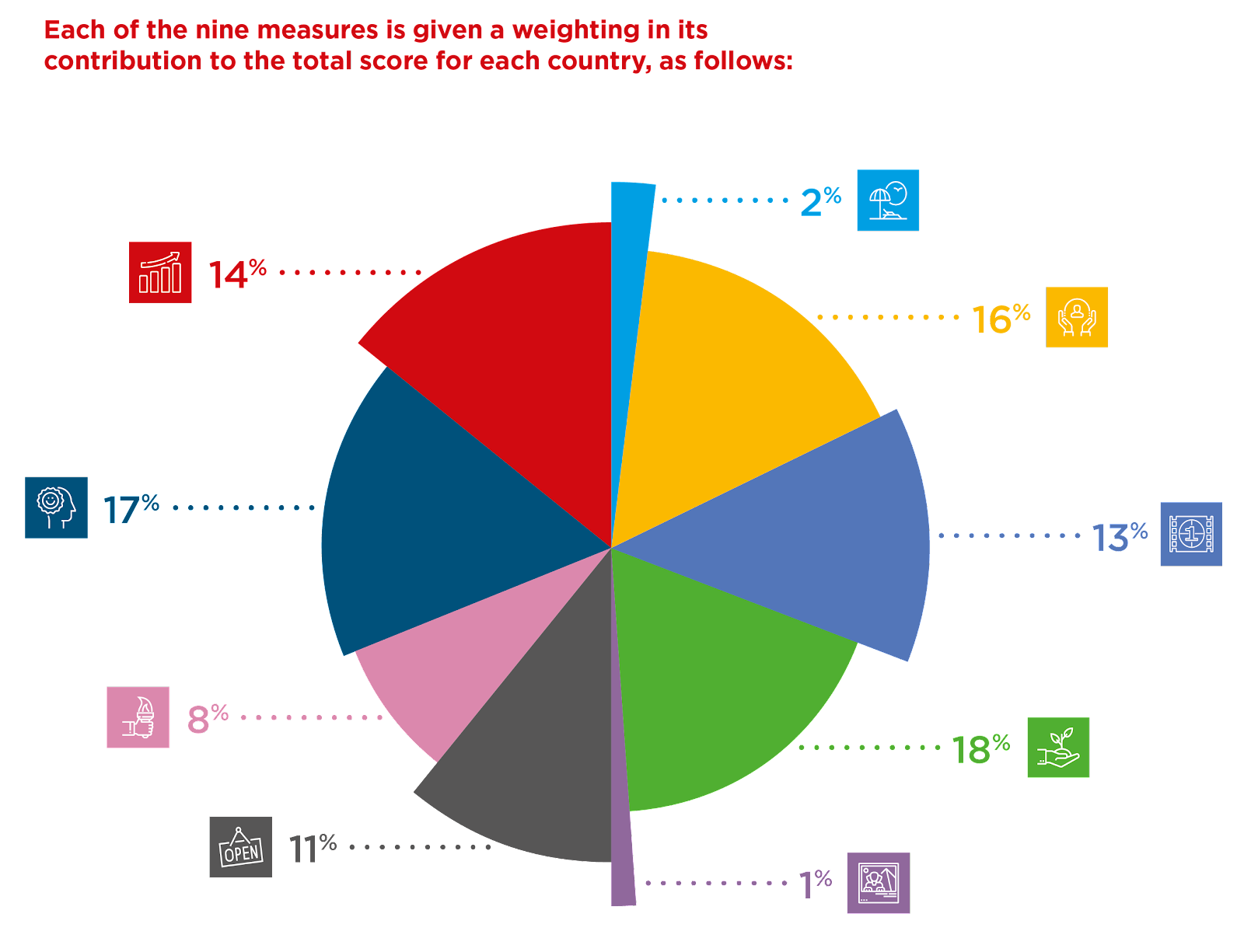 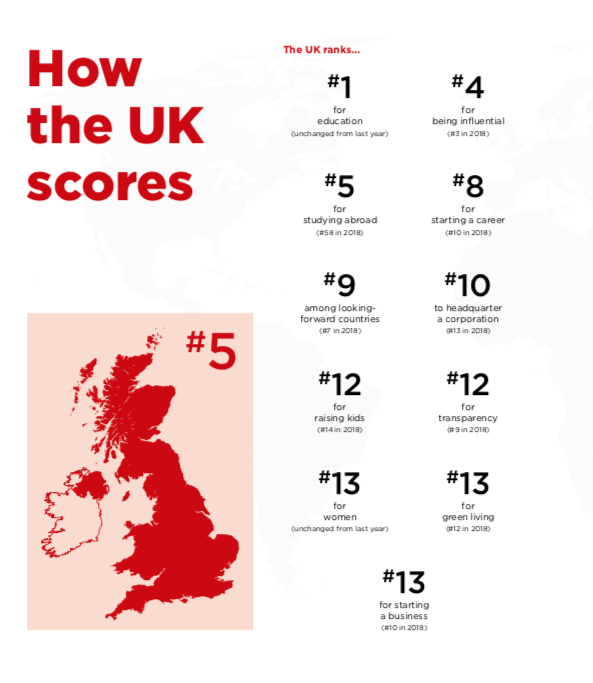 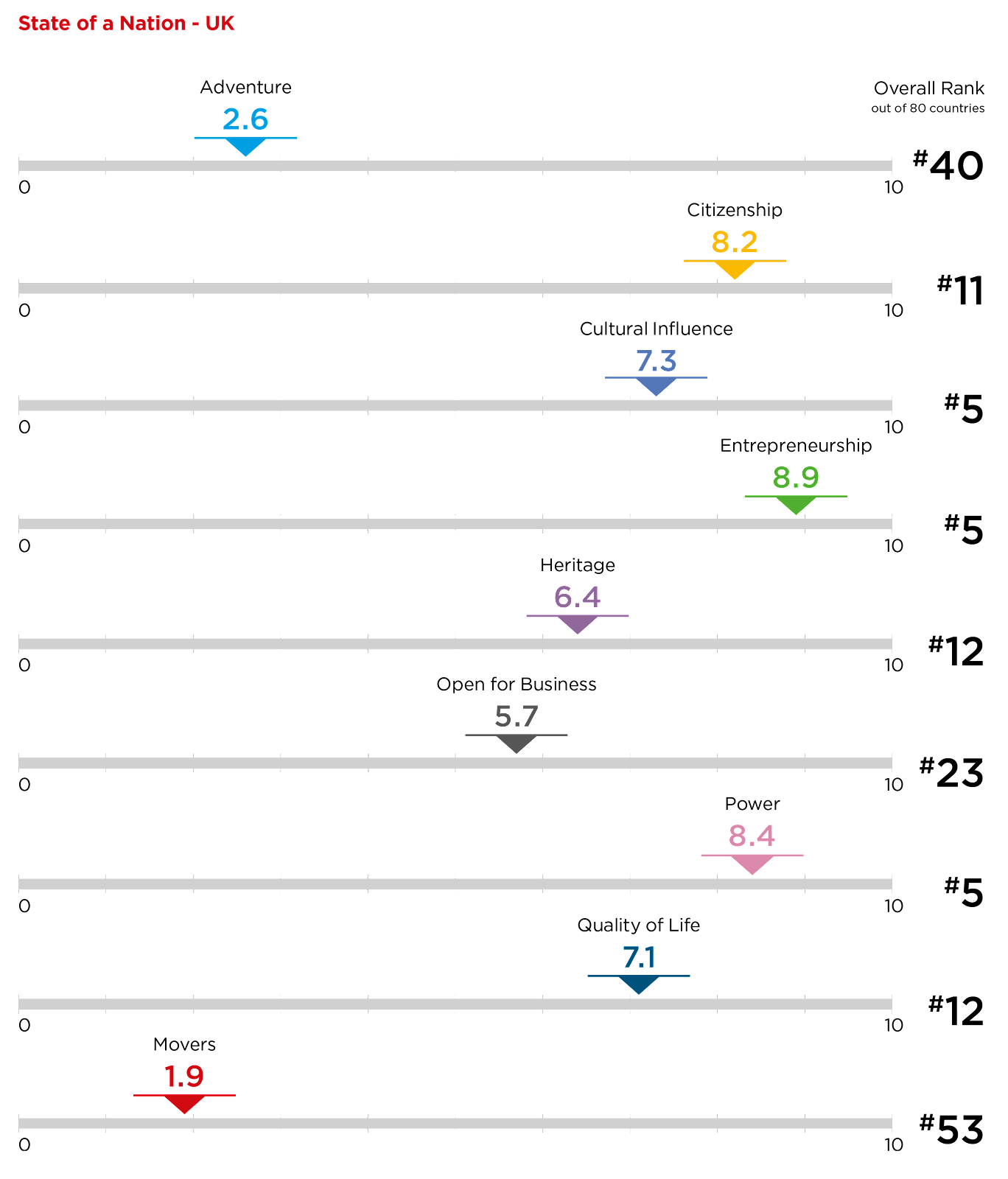 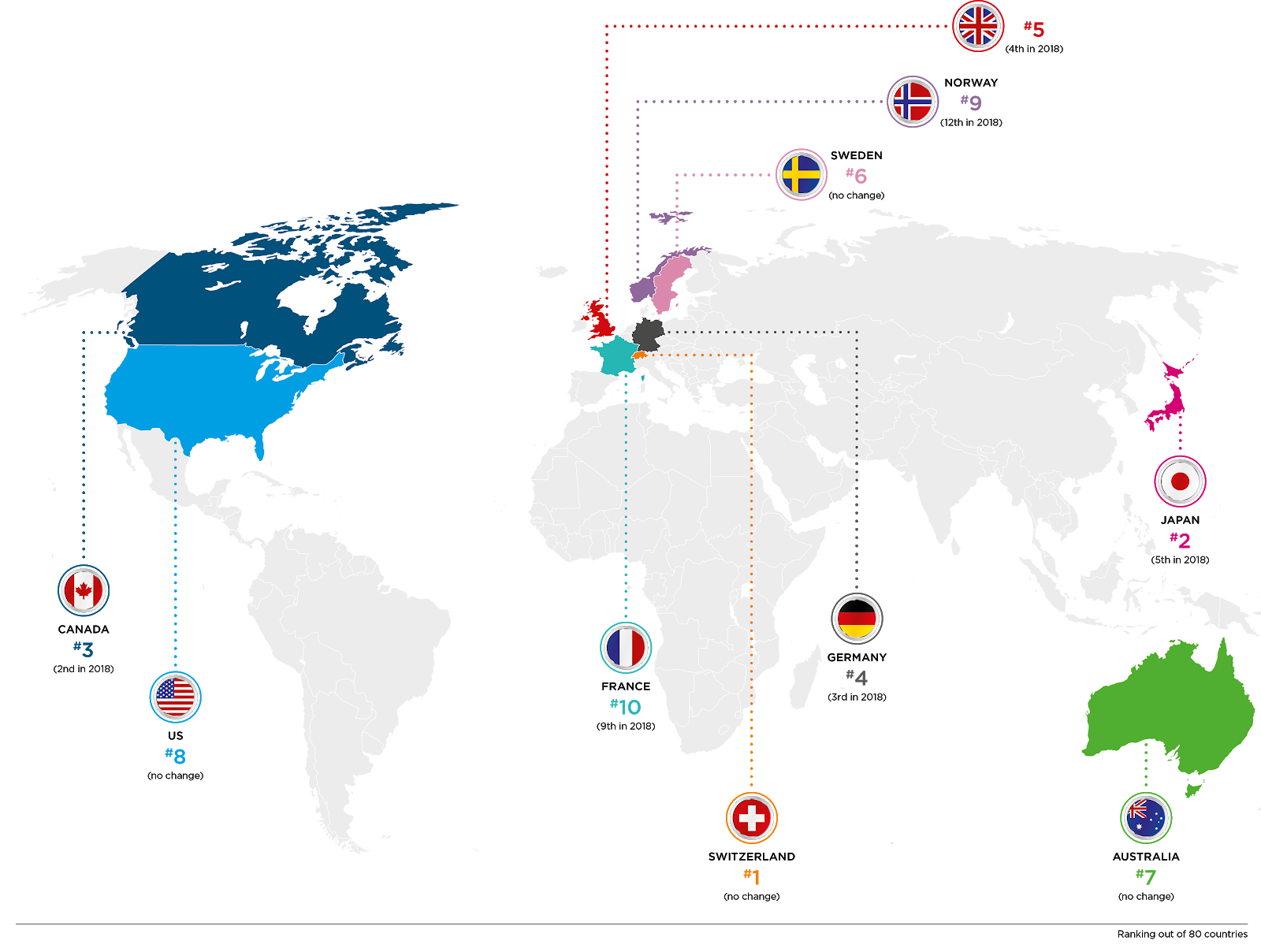 Keeping up with the neighbors 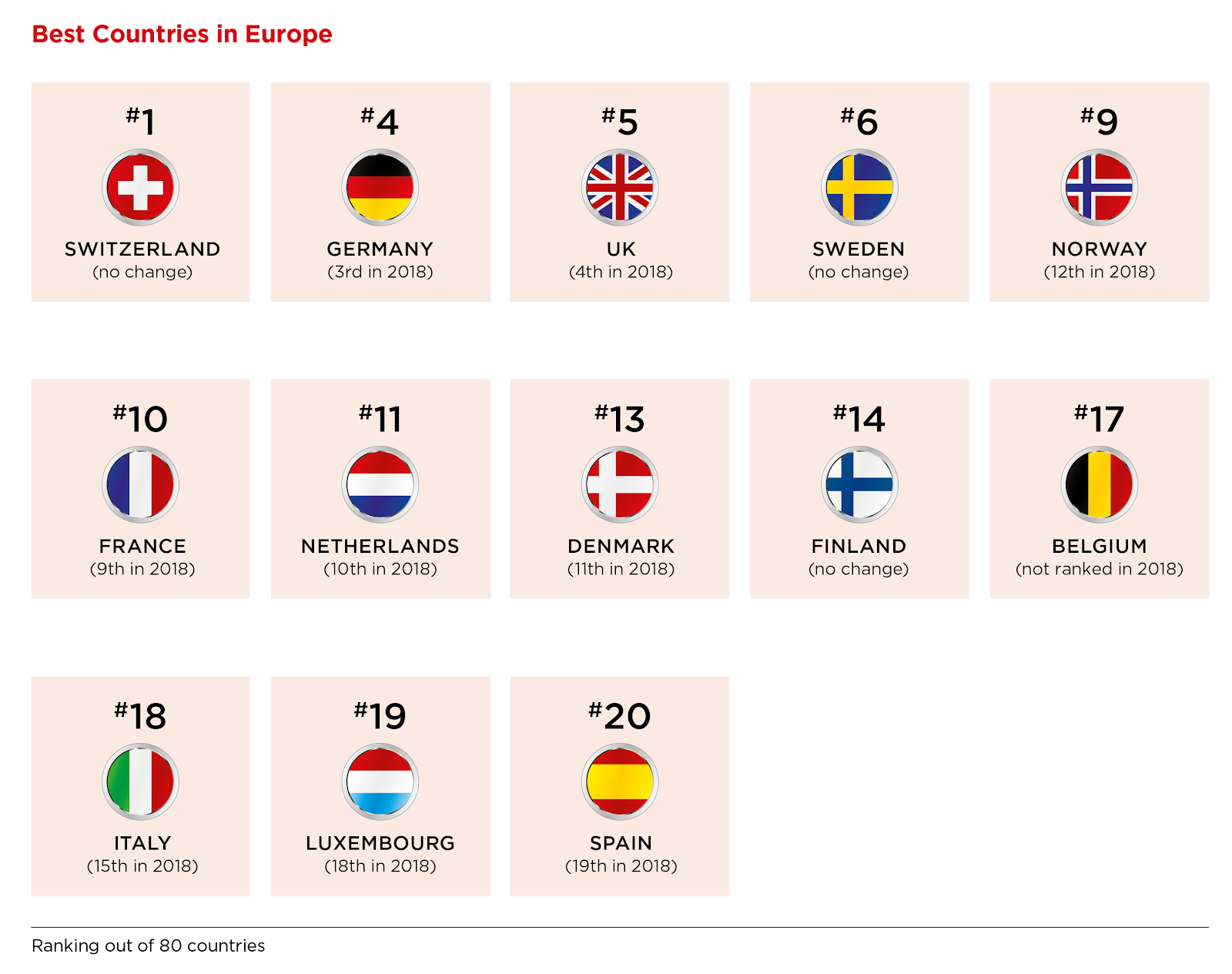 It’s perhaps unsurprising, given the closeness of the Brexit referendum result, that the UK is fairly evenly split between people who feel like citizens of their country and those who feel more like citizens of either their city or the world.

What is curious, however, is that Brits are, on the whole, more convinced than people abroad that their lives have improved as a result of their country’s membership of multinational organisations such as the United Nations, NATO, the Commonwealth and, yes, the European Union. This view is held by 69 percent of UK respondents, compared to a global average of 57 percent.

On a range of attitudinal questions asked as part of the Best Countries research, Brits generally hold views that are roughly in line with their counterparts in other countries. They have more confidence than the global average, however, that their country is not corrupt. They are also more trusting of their government to take care of their economic wellbeing, health and safety; this is all relative, though, with only a small majority (55 percent) of Brits expecting their government to protect their economic wellbeing, and 67 percent believing in the country’s leaders to look after their safety.

British people are also more likely than average to believe the world is a safe place (40 percent agree this is the case, compared to 35 percent globally). But they do have concerns about the effect of the digital world on their lives. Around 74 percent of UK respondents say they see the internet as more divisive than uniting, and two-thirds say they trust newspapers more than they believe online sources of news.

This year’s Best Countries research for the first time asks people explicitly about how they feel about products based on their country of origin. This has led to a new ranking: The Origin Index (OI), which ranks consumer preferences across a range of product categories.

The UK is an outstanding performer on this measure, ranking among the top 10 countries of choice when consumers both at home and around the world consider buying from a broad range of product categories. Wine is the only one of eight categories measured in which the UK is not a top 10 choice for international buyers.

British consumers generally held UK products in very high regard, and prefer to buy food, cosmetics and fashion that’s made in the UK above those from any other country. There’s also a strong preference for home-produced electronics and pharmaceuticals, but the breadth of categories in which Brits prefer to buy British shows there’s an underlying love for locally produced goods and services. 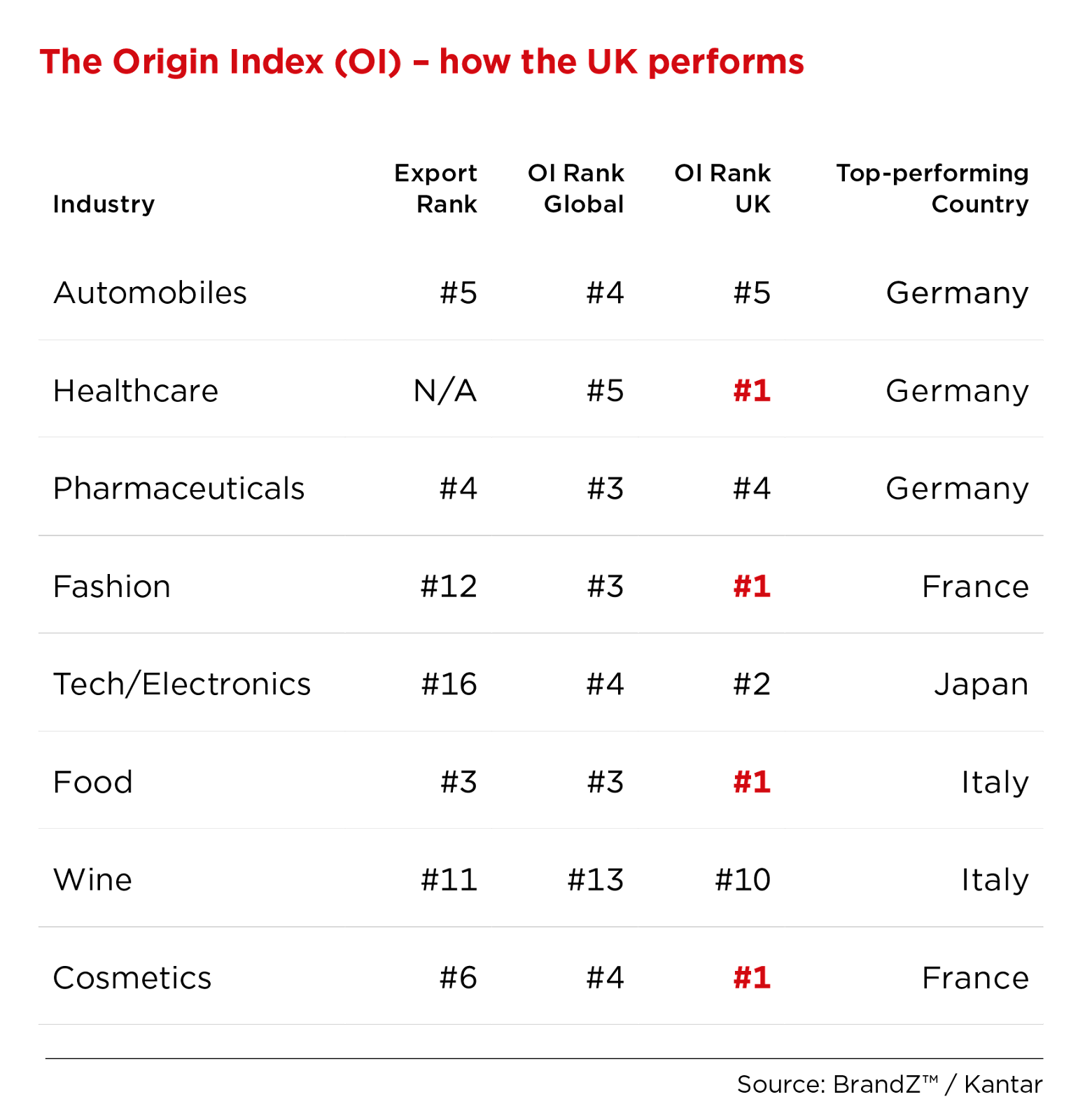 British goods have strong pulling power for international consumers, with UK-made fashion, pharmaceuticals and food ranking third in the world for global preference, and cars, cosmetics and technology not far behind. People clearly want and trust British goods.

As a major exporter, the UK’s real-world performance closely matches the levels of demand for “Made in the UK” measured in the Origin Index survey. Food and pharmaceuticals are especially strong areas for UK brands to make overseas sales.

The data identifies several strong areas of opportunity; while international consumers say British fashion and technology are among their top picks in these categories, the export figures don’t bear this out. Brands hoping to export fashion or technology from the UK should leverage the country’s reputation in these sectors to realise success.

What UK brands should know

Brands need to tailor their brand-building efforts, from product development to communications, according to whether they are targeting local or international consumers, and to preconceptions around how “Made in the UK” reflects on the category in which they are operating. Britain is known as a hub of quality, of global influence and fashion, and brands can lean into these attributes to promote themselves internationally.

At home, meanwhile, a clear desire to support local businesses and buy quality local goods provide brands with a domestic opportunity for UK brands to promote their heritage.