The Top 50 Most Valuable Indonesian Brands in 2019 are together worth US$83,989 million, 4 percent more than the Top 50 a year ago. In Rupiah, this represents around IDR4.4 million for every resident of Indonesia – enough for a new Samsung A50 smartphone each!

Growth in the total value of the ranking is slower this year than the 13 percent seen in 2018 and the 8 percent a year earlier, but in such a volatile business environment – not just locally but around the world – 4 percent growth is a strong result. It also beats the 3 percent growth in the value of shares on the Jakarta Stock Exchange over the past year.

The rising value of the ranking means that the threshold for inclusion in the Top 50 this year has, for the first time, topped $200 million. When this ranking launched, just five years ago, a brand value of $110 million was enough to make it into the Top 50.

The overall growth rate in Indonesia this year is slower than that seen among the Top 100 Global Brands (which have collectively risen in value by 7 percent in 2019), but is on par with the rates of growth experienced in many other markets for which BrandZ rankings are prepared. 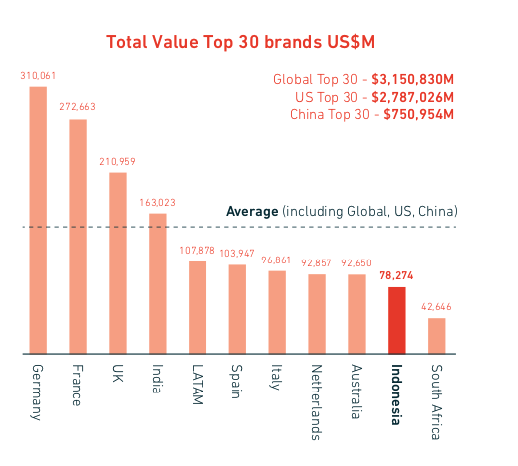 When we factor in the difference in the size of each country’s economy, it starts to look like a much more level playing field, on which Indonesian brands are performing just as well as their counterparts in markets with a far bigger GDP.

Allowing for the difference in GDP, the Top 30 Indonesian brands prove to be just as valuable as those of any other country. 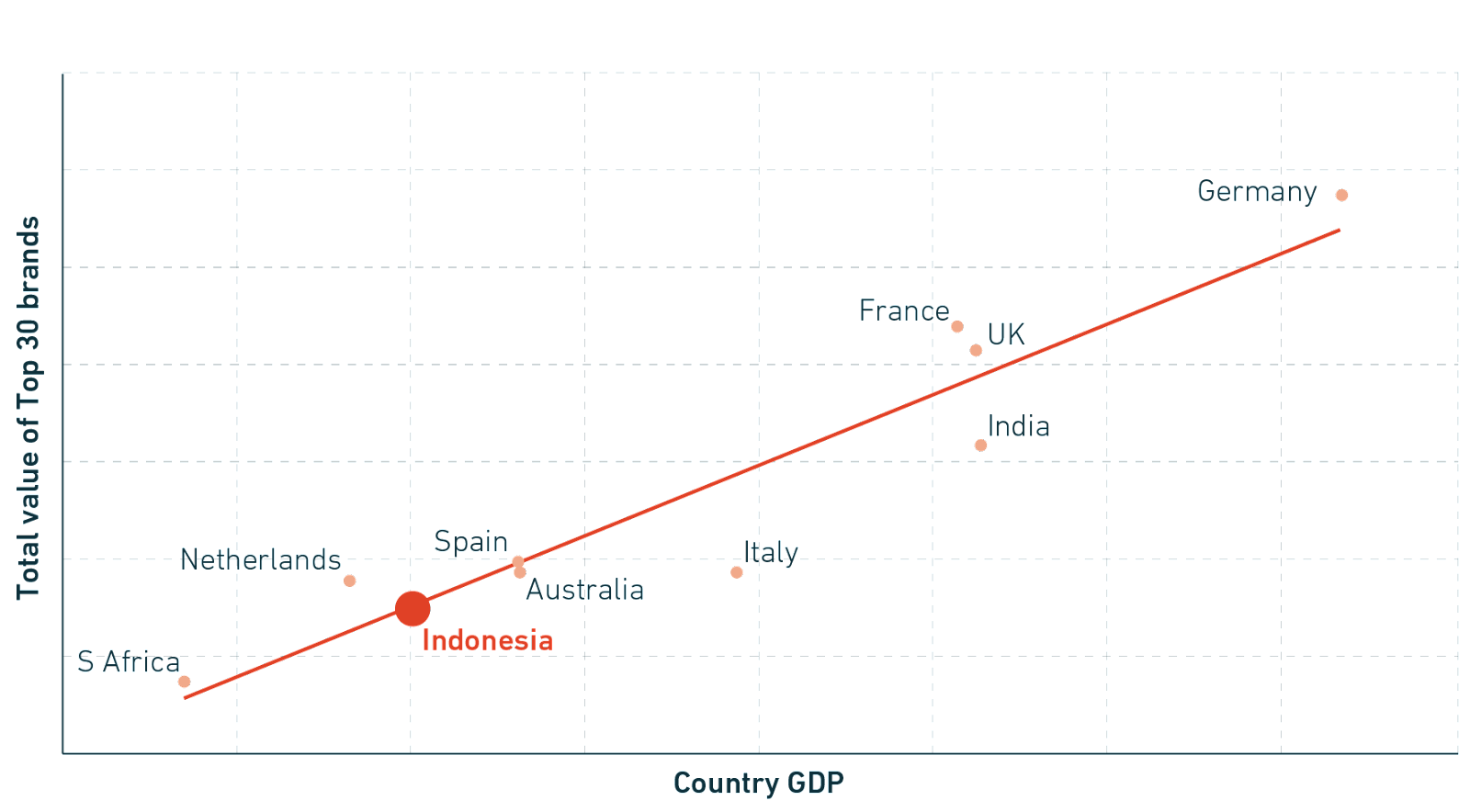 Strong, valuable brands are important to businesses for two reasons – both of which link directly to the bottom line.

Secondly, and of particular importance to Indonesia at a time of such volatility in the business landscape, is that strong brands help insulate a business during times of difficulty.

This applies whether that trouble is of a brand’s own making, or is part of a category-wide or even country-wide decline. During the 2008 global financial crisis, the BrandZ strong brands portfolio of shares suffered a less-sharp drop in value than the MSCI World Index, and recovered far more quickly.

Leaders of the pack

The Top 10 brands have outpaced the rest of the brands in the ranking, growing by an average of 7 percent compared to their combined 2018 value, and account for 71 percent of the Top 50’s total value. Such a high concentration of value at the top of the ranking is not unusual, particularly among the smaller markets, where a few mega brands tend to dominate. Tokopedia makes its Top 10 debut this year, displacing BNI, which slips into 11th position. 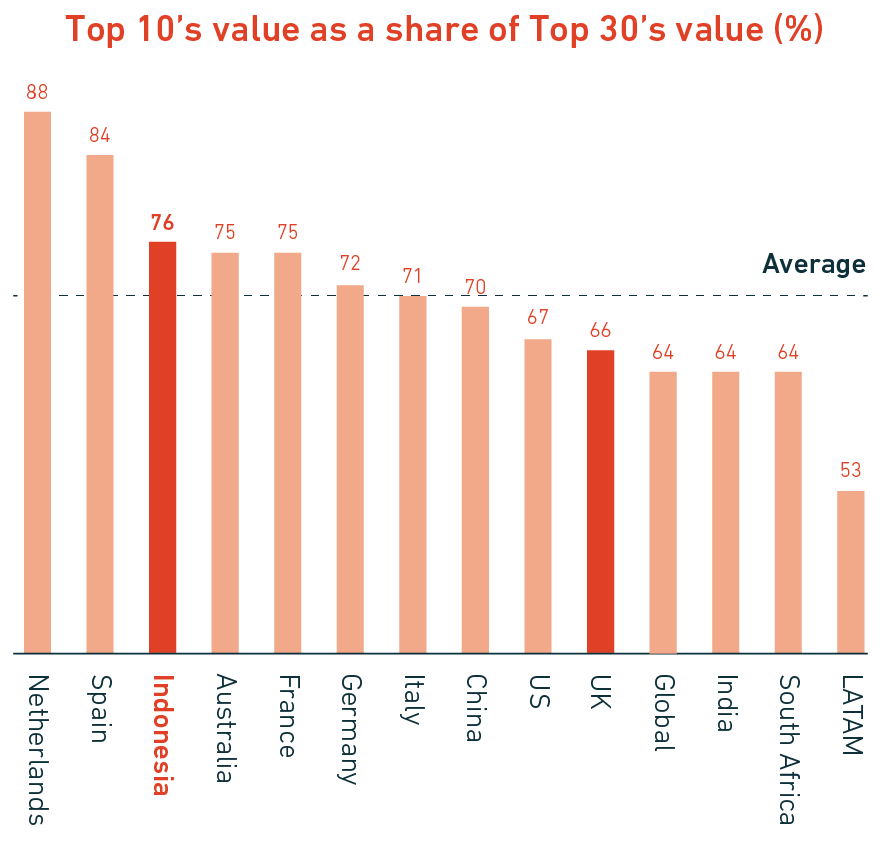 In the five years since the BrandZ Indonesian Top 50 launched, 68 brands have appeared in the ranking. Over that time, the total value of the ranking has risen by 30 percent. Of the 50 brands in the 2019 table, 39 have been there since the beginning; 27 of them have grown in value, by an average of 32 percent, while 12 have lost value but are still sufficiently valuable to remain in the Top 50.

Since the inaugural ranking, 11 new brands have entered the Top 50 and remain there today.

The fastest-growing brands over the past five years have been Sinarmas Multiartha (up 119 percent), BTN (82 percent), Dji Sam Soe, up 77 percent, BRI (up 33 percent), and BCA, which as well as being the number one brand in the ranking every single year, has grown in value by 32 percent.

Technology-enabled brands are the fastest-growing among the Top 50 this year. Disruptive innovators in travel, transport and retailing are growing at a blistering pace, often, it seems, at the expense of legacy brands in these sectors. 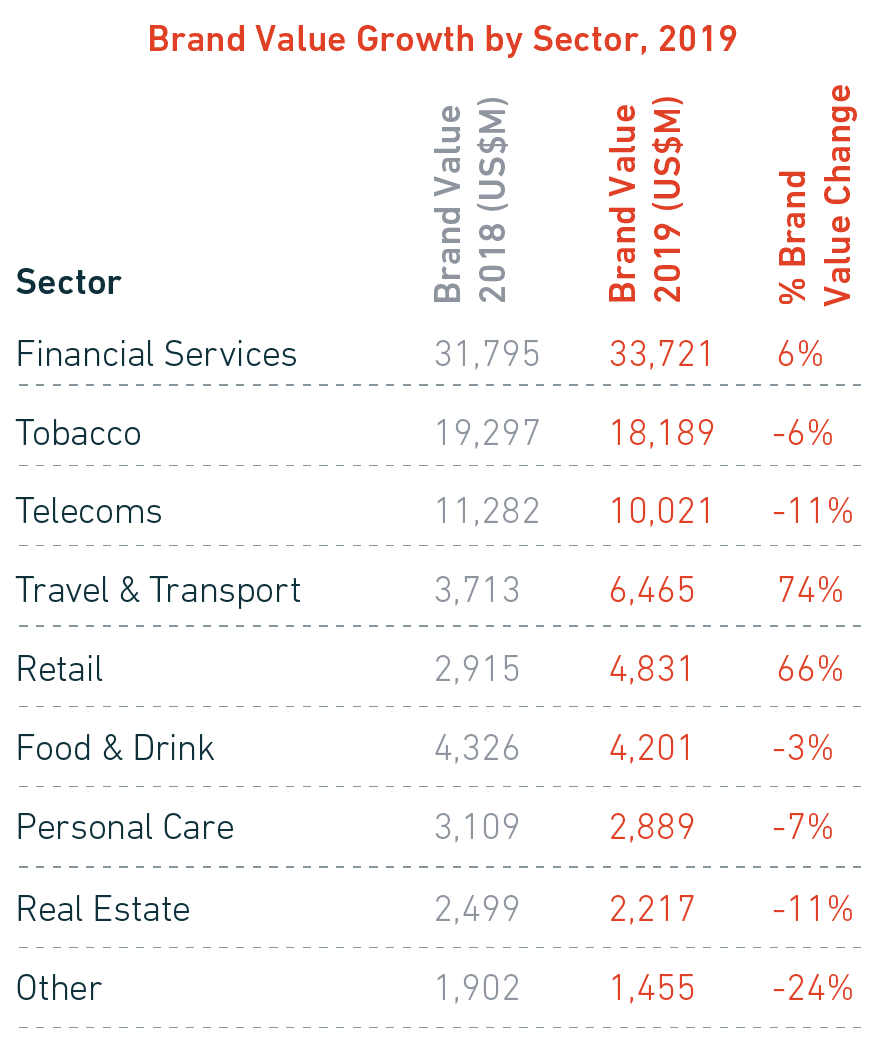 Rise of the Unicorns

The fastest-growing brands in Indonesia include the country’s four “unicorn” brands, which means they have a market capitalization of over US$1 billion. GOJEK, Tokopedia, Traveloka and Bukalapak are soaring up the Top 50 ranking thanks to their focus on innovation, excellent customer service and standing out in the market in ways that consumers love.

But it’s not just the high-tech, headline-grabbing brands that are engineering strong double-digit (or triple-digit) growth in value. Cigarette and noodle brands also feature among the fastest risers this year, along with a bank, a telecom provider, a supermarket and a hardware store chain. 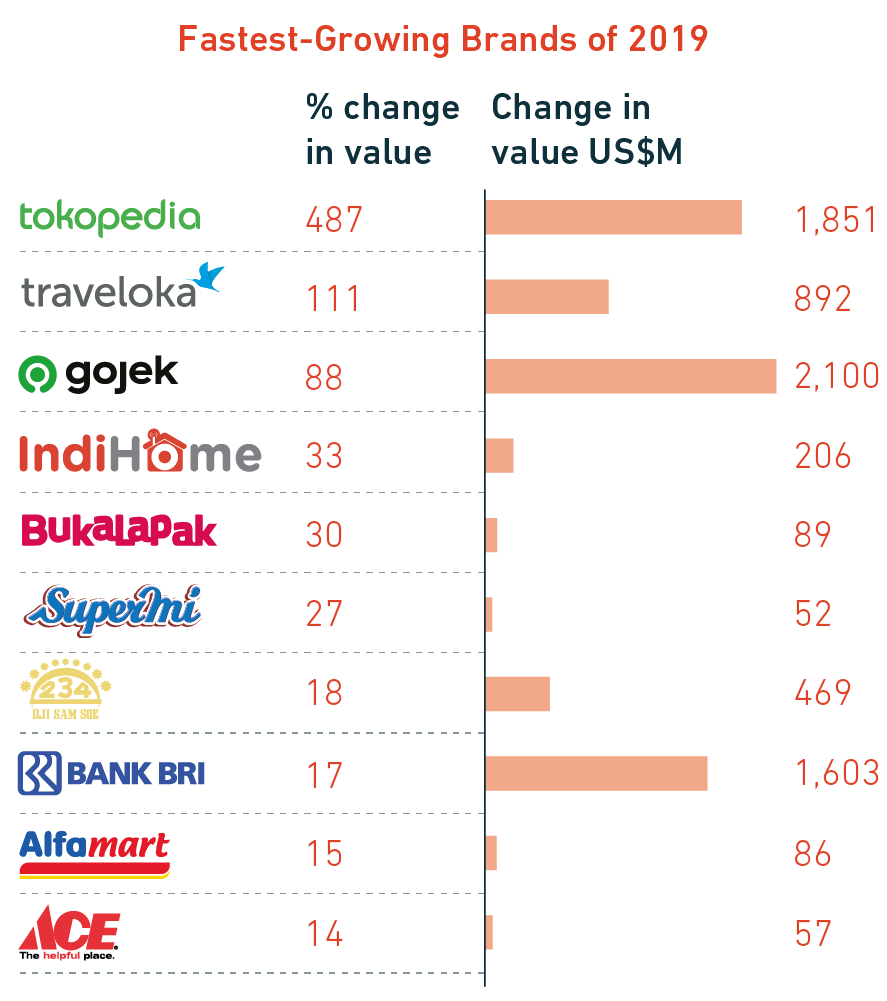 What began as a ride-hailing service is now a portal that promises to meet all of its consumers’ needs – and Indonesia’s first “decacorn”, a business worth over US$10 billion. More and more services have gradually been added to the GOJEK family, making it a one-stop convenience service for just about anything or anyone that can be delivered by moped. Go-Ride, Go-Send, Go-Food, and Go-Mart have recently been joined by Go-Box, Go-Glam, Go-Clean and Go-Massage. GOJEK is not just winning over consumers, it’s also attracting high-profile investors. These include Google Capital, Tencent Holdings, KKR, Sequoia Capital and JD.com. The brand’s tagline is “One app for all your needs”.

The tech giants might be growing the fastest, but it’s the country’s financial services brands – and its banks in particular – that account for the majority of the value in the Top 50. Seven banking brands feature in the Top 50 (three of them in the Top 10) and together they are worth $33 billion; when taken with consumer finance and insurance brands, these financial services providers account for 40 percent of the Top 50’s value, and their combined value is up 6 percent this year.

Tobacco and telecom providers are the next-biggest categories in the ranking; both have lost value overall this year, but there have been individual winners and losers rather than an overall category decline. This reflects two key insights that BrandZ analysis in Indonesia has shown for several years: 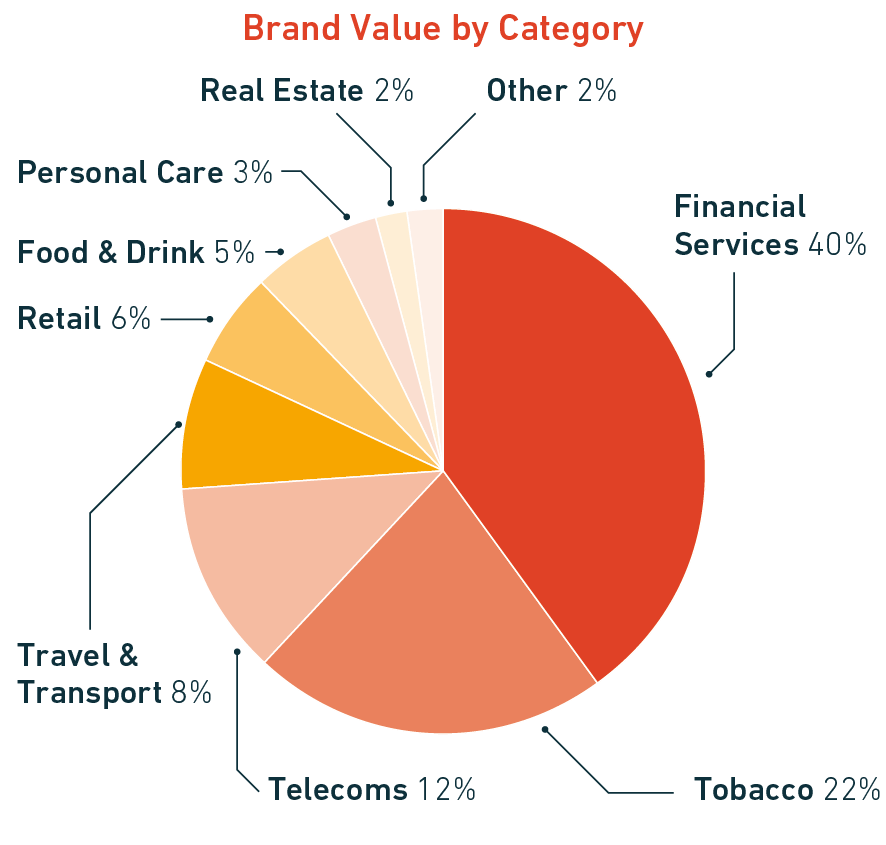 Consumer finance brand FIFASTRA and telecom provider Smartfren make their Top 50 debut this year, in 34th and 39th places respectively. Two brands that have been in the ranking before but were not present last year have made their way back in, so we see Bank Mega in 49th position, with the biscuit brand Roma just behind.

FIFASTRA provides the loans that help many Indonesians buy a new or second-hand motorcycle. It has a close relationship with Honda, and through roadshow activities and online promotions it offers special deals, such as a recent zero-deposit loan. Brand communications are often less about the mechanics of FIFASTRA’s promotions, however, and more about the way people’s lives are improved by access to finance.

Smartfren is a mobile phone operator with a fun personality, often using youthful humour in its communications, and funny memes that are well known to young consumers. Celebrities of the online and offline world help promote the brand, which is highly active on social networks. Smartfren has developed several YouTube series, including “Milenial jadi Miliuner” (Millennials become Billionaires).

Pockets of growth built on foundation of stability