When it comes to brand value, the United States sits in a lofty league of its own. The total value of its Top 100 has now reached $3.81 trillion, which is almost equivalent to the GDP of Germany, the world’s fourth largest economy. Top US brands also account for more than half of the world’s 100 most valuable brands, 54 qualifying for the ranking.

Compared with other nations, US brands certainly deserve a bow. Out of the 14 countries for which BrandZ currently ranks at least 30 brands, the US is by far the outlier, both in total value and value relative to the size of the economy. And the average brand within its top 30 is also nearly four times as valuable as the average brand from China. Clearly, somebody has been eating their Wheaties. 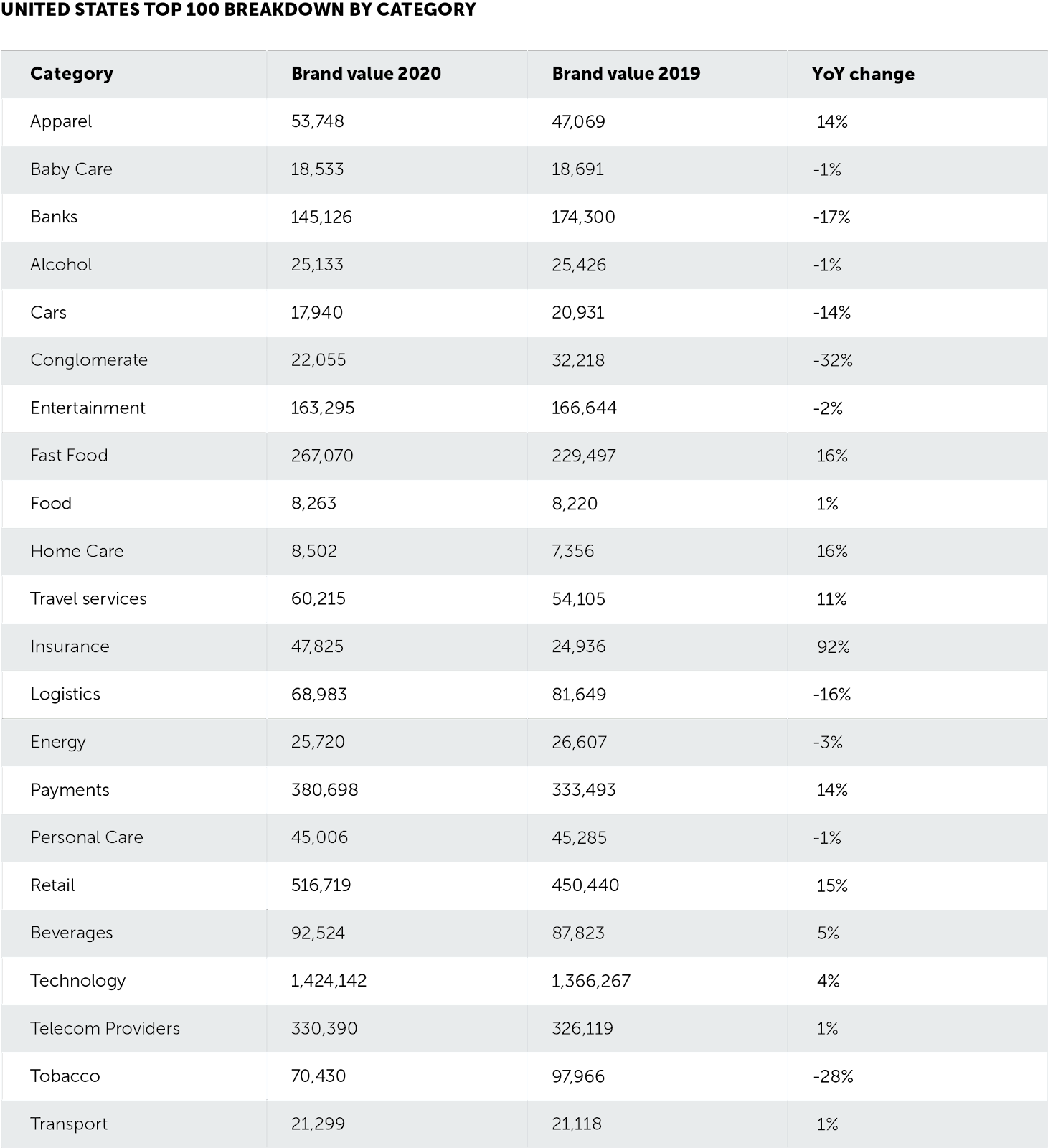 Not much to see here. Year after year, technology brands dominate the rankings of the US most valuable brands. This year, they consist of 18 brands, one less than last year, but still account for more than $1.4 trillion, or 37 percent of the total value of the Top 100.  Maybe the only news is how little in aggregate they grew: 4 percent versus 5 percent for the entire top 100. Much of the blame can be laid on small drops from extremely large brands. Apple and Google lost 4 percent and 3 percent respectively. Going by the numbers, however, twice as many tech brands grew as fell, with the big winner being Instagram, which leaped 98 percent and was the fastest growing brand in the Top 100.

Retail brands had another banner year in 2019, growing 15 percent to $517 billion in value. More than half of the category’s value is driven by this year’s top-ranking brand, Amazon, which is now worth nearly a third of a trillion dollars. This makes retail among the top-heaviest categories, with its second-place brand, The Home Depot, worth only one sixth of its first. Several other retailers had good years, with Walmart and Costco each rising 18 percent, and Target 13 percent. This reflects an environment in which larger stores have learned to compete or at least cope with Amazon. Target’s most recent quarter, for example, surprised analysts due to its strong digital growth. Retail should be an interesting category moving forward, as brands increasingly integrate their physical footprints with strong digital offerings.

Only four payments brands make it into the Top 100, but two of them, Visa and MasterCard, sit in the top 10, and the category accounts for nearly 10 percent of the value of the Top 100. Payments have been in a long-term, cyclical rise as global consumers are increasingly seeking greater convenience in their transactions. This year, they climbed 14 percent, which for this category constitutes an off year. There was no standout brand in the category, however, unless slight rather than solid growth can be considered standing out. American Express grew only 5 percent, while every other brand in the category grew at least 15 and no more than 17 percent.

While telecom providers as a whole rose only a placid 1 percent, that belies the underlying turmoil in the industry. Depending on the brand, performance was all over the map in 2019. Some, like Xfinity, rose a healthy 18 percent, while others, like Dish Network, fell an alarming 24 percent in value. This great diversity of outcomes certainly reflects what is happening in the real world, as these brands are pursuing a range of content, data, and technology strategies to keep pace with a highly fluid consumer environment. Whether it’s 5G, fiber, or the debundling of media properties, telecom providers are certainly living in disruptive times. Overall, they account for $330 billion or just under 9 percent of the total value of the Top 100.

Americans love their fast food, which is unfortunately reflected by their high rates of obesity and heart disease. Nonetheless, this was one of the fastest growing categories this year not least because it welcomed newcomer Taco Bell in the rankings. The leader in the category, McDonald’s, remains far and away its largest brand. At $144 billion, its value is three times that of the second-place Starbucks. That said, the comeback fast food story of the year has been Chipotle. After a much-publicized E. coli scandal in 2015, it grew a blistering 33 percent in brand value in the past year.

At 92 percent, insurance was the fastest growing category in the Top 100 this year, though that achievement comes with an asterisk. To qualify for the BrandZ ranking, our analysts must be able to access certain kinds of financial information. This year, UnitedHealthcare and Aetna, two large American insurance companies, were able to be evaluated for the first time. The former added a hefty amount to the category total, as it debuted at number 53, making it the most valuable insurance brand. While you might not expect it, the industry is typically a fun one in the United States, as brands like Geico, Progressive, and State Farm are well known for battling each other across the entire media landscape with wry and humorous advertising.

The comeback kid of this year’s Top 100 has to be fast food brand Chipotle. If ever there was a case of innovating out of a crisis, this is it. In 2015, the brand, which is well known for local sourcing, faced a devastating E. coli bacteria scandal. This led to a downturn and by last year, the brand clung by a fingernail to the BrandZ™ rankings at #100.

Change was already in the works. In February 2018, the company hired a new CEO, Brian Niccol, who had previously led turnaround efforts at Taco Bell. Since then, the brand has focused heavily on innovation in three areas: food, delivery, and digital ordering. In the case of the first, the brand has moved nimbly to reflect popular trends in the marketplace. A good example of this is its Lifestyle Bowls that cater to paleo, keto, high-protein, and other specialized diets.

In addition, the brand introduced a loyalty program, in-store kiosks, and a partnership with DoorDash. As a result, Chipotle’s revenue rose almost 14 percent in the first quarter of 2019, with its brand value reflecting that success and notching a 33 percent gain.

Branding as an art form