Value for South African Brands: Somewhere Over The Rainbow Nation

In the early months of 2018, South Africa experienced dramatic change - out with the old, and in with a new president and the promise of cleaning up corruption and crime, and improving economic conditions.

South Africa Is Trending Up

Despite its hardships, over the last decade South Africa has experienced consistent growth in its public markets, increasing positive average trends in exports and consumer prices, and a recent surge in consumer confidence following the changes in February of this year.  South Africa’s GDP and GDP per capita has experienced consistent growth since the last recession in 2009, its tourism remains strong, and with the hopes of reduced crime and corruption, foreign investors are more willing to support opportunity.

South Africa’s economic engine continues to be powered by tourism, finance, real estate, agriculture, and mining. The country ranks as one of the top economies on the continent, and consumers have demonstrated an eagerness to adopt innovation and technology integrated into their brands to help them meet their needs and improve quality of life.

Compared with global consumers, South Africans demonstrate a greater tendency to seek out memorable experiences and find and consume products and services that are new and exciting. South Africans seek motivation and confidence by dressing better, looking better and feeling better, and the brands that meet these needs are succeeding.

Local brands are primarily driven by South African consumers, illustrating a relatively insular economy. While some brands like Nando’s and MTN have globalized, generally South African brands have yet to emerge onto the world stage relative to the top brands of other countries. This is not surprising given the history of the country.  However, South African brands may be poised for growth and global expansion as a direct outcome of South Africa’s political and economic stabilization.

South Africa’s strongest brands are banks, retailers and insurers who make up more than half of the Top 30 brands. Banking dominates the ranking with six banks accounting for over a third of its value; and four banks ranked in the Top 10 (Standard Bank, First National Bank, Absa, and Nedbank).  Retail brands are also strong with eight brands represented in the Top 30.

In a recent Kantar Consulting survey, when asked about how to resolve a problem, South Africans reported a greater likelihood to seek help from experts, as opposed to developing a unique solution from scratch.  If someone has already figured it out, why reinvent the wheel? Instead of costly innovation, South Africa has left this to other markets and instead quickly leapfrogged the world by adapting the relevant technologies that meet business and consumer needs, and adopting them quickly.

This pragmatic entrepreneurial mindset is epitomized at the individual level by the metaphorical plucky spaza shop owner, who is eager to learn from the experiences of others, and to implement just in time solutions that are fit for purpose, but not over-engineered. Innovations can be big or small, and also digital or analogue.

However, technology is certainly present within many South African brands, as key disruptions have taken place in most banks, retailers like Woolworths, Mr Price, and Pick n Pay, Telcos, and other categories. The BrandZ Top 30 most valuable South African brands are filled with companies that have successfully innovated by buying and adapting technology. Companies like Capitec Bank and First National Bank are seen by consumers as the most innovative (for very different reasons) and other brands like Takealot and Nando’s are also perceived to be very innovative.

Some brands struggle with innovation and worry about what it will take to become tech savvy and compete against global players like Amazon, Uber, or Netflix. Brands in other markets struggle with the same problem. What many have done is invest in machine language, artificial intelligence, and distributed computing to enable brands the world over to effectively compete against global giants. South Africans are great adaptors, and in the same way as mobile technology, in short order, helped local consumers to catch up with the world, similarly, market proven and effective innovative technologies can be acquired to help leapfrog local brands in a broad range of customer-centric areas.

South African Brands vs. the World

South Africa is perceived by the world as adventurous and its businesses and entrepreneurial spirit are seen as strong (ranked #18 by World News/BAV report as “Movers”) scoring above the world’s highest overall ranked countries like Switzerland, Canada, and Germany.  Unfortunately, South Africa also perceived #61 in “open for doing business” stemming from unattractive tax policies and lack of government transparency, excessive red tape, and corruption. It’s worst score, unfortunately, was “quality of life” (ranked #62). 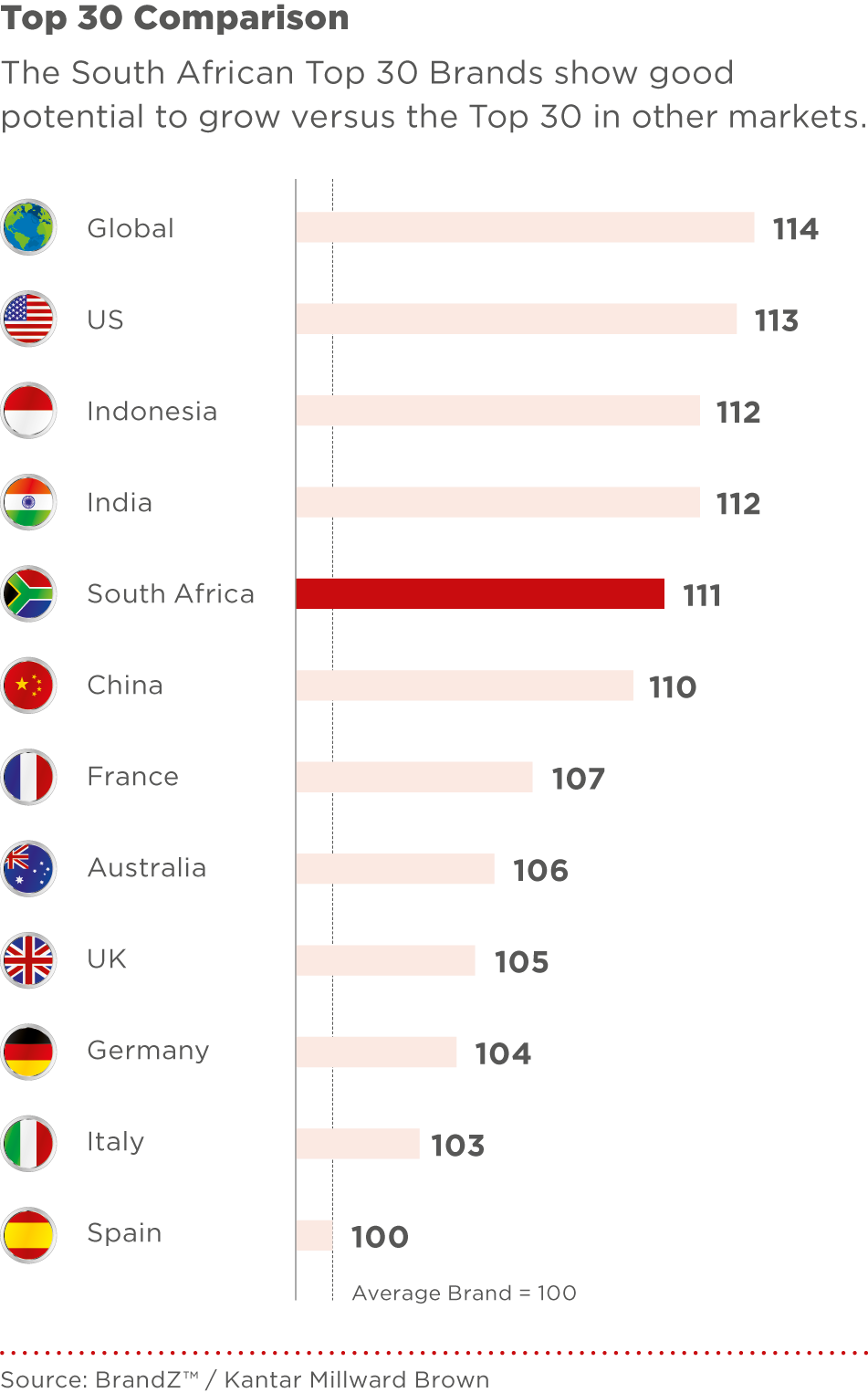 Many African countries aspire to become manufacturing hubs for world outsourcing. Other countries in the region have been able to expand their manufacturing capabilities to support global demand for a variety of goods. However, despite South Africa’s unemployment levels as high as 30%, restrictive labor laws, and high minimum wages, the World Bank maintains that South Africa’s economy is “not likely to emerge as a strong competitor in labor-intensive industry in the foreseeable future.”

But, this isn’t necessarily bad news. For South African brands not heavily reliant on manufacturing costs, opportunities await as healthy brands show the greatest potential for global growth versus the Top 30 brands in other markets. Brands with strong fundamentals that understand how to effectively communicate meeting consumer needs have an advantage and can effectively expand and compete on the world stage. Companies like Nando’s and Investec are great examples of how companies can successfully apply their business models in foreign markets and create value throughout the consumer journey.

Nelson Mandela’s vision of a Rainbow Nation continues to be an aspiration as South Africans celebrate the centenary of his birth, and strong brands have lofty aspirations too, both locally and abroad. As the country navigates the inevitable bumps in the road, all eyes are still on the entirely achievable goal of a better future for all South Africans, and these brands all have an important role to play along that journey.